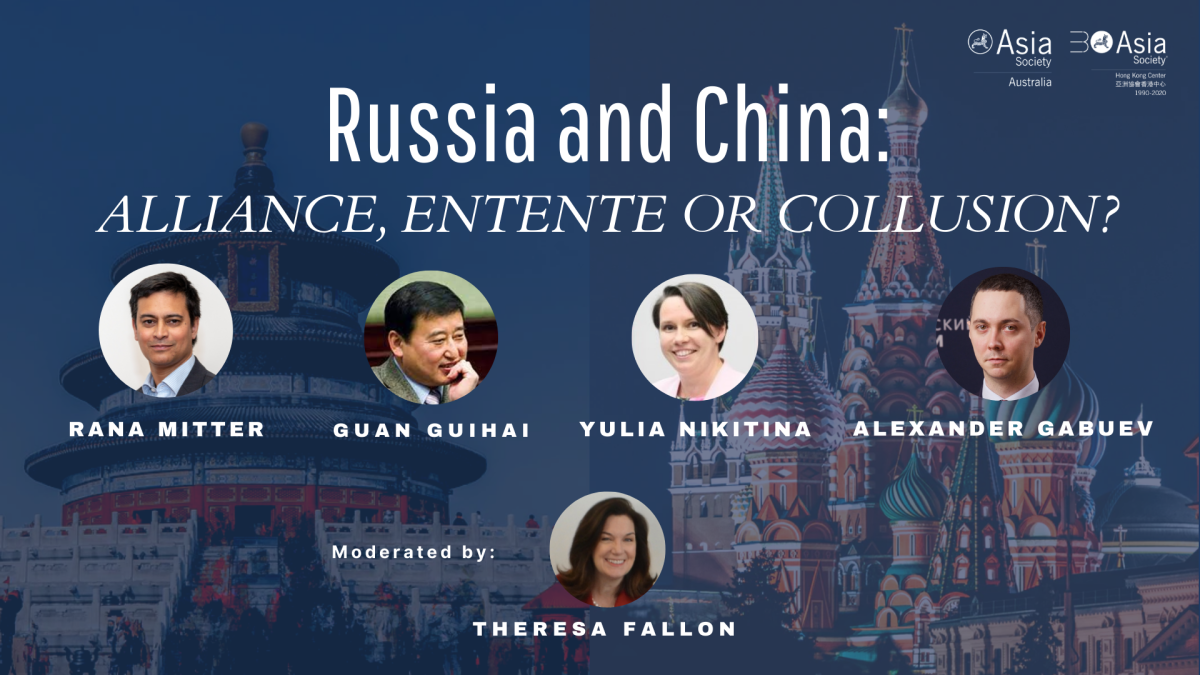 *Zoom login details will be emailed upon registration (ASHK Members Only)

Twenty years ago the China-Russia Treaty of Good-neighborliness and Friendly Cooperation, was signed. In June this year, before the treaty’s expiration, President Xi Jinping and President Vladimir Putin renewed the treaty for another five years.
The treaty was first signed between the former Chinese leader Jiang Zemin and Putin on July 16, 2001, as a sign of the strategic partnership and convergence between the two countries. What has changed in the China-Russia relations over the past two decades? How deep and broad is their partnership? What’s next for the bilateral relationship? What are the implications of this partnership for the global community?
Join Alexander Gabuev, Senior Fellow and the chair of the Russia in the Asia-Pacific Program at the Carnegie Moscow Center, Dr. GUAN Guihai, Executive Vice President of the Institute of International and Strategic Studies at Peking University. Prof. Rana Mitter, Professor of the History and Politics of Modern China at the University of Oxford, and Dr. Yulia Nikitina, Associate Professor of the Department of World Politics and Leading Research Fellow of the Center for the Eurasian Studies at MGIMO University in a re-evaluation of future China-Russian Relations. The discussion is moderated by Theresa Fallon, Founder and Director of the Centre for Russia Europe Asia Studies (CREAS). Philipp Ivanov, Chief Executive Officer of Asia Society Australia, will do the opening and closing remarks.

Alexander Gabuev is a senior fellow and the chair of the Russia in the Asia-Pacific Program at the Carnegie Moscow Center. His research is focused on Russia’s policy toward East and Southeast Asia, political and ideological trends in China, and China’s relations with its neighbors—especially those in Central Asia.
Prior to joining Carnegie, Gabuev was a member of the editorial board of Kommersant publishing house and served as deputy editor in chief of Kommersant-Vlast, one of Russia’s most influential newsweeklies. Gabuev started his career at Kommersant in 2007 working as a senior diplomatic reporter, as a member of then president Dmitry Medvedev’s press corps, and as deputy foreign editor for Kommersant. His reporting covered Russia’s relations with Asian powers and the connection between Russian business interests and foreign policy.
Gabuev has previously worked as a nonresident visiting research fellow at the European Council on Foreign Relations (ECFR) and taught courses on Chinese energy policy and political culture at Moscow State University.
In April-June 2018, Gabuev was a visiting scholar at Fudan University (Shanghai, China), and was teaching courses on Sino-Russian relations. Gabuev is a Munich Young Leader of Munich International Security Conference and a member of Council on Foreign and Defense Policy [Russia].

GUAN Guihai is an Executive Vice President of the Institute of International and Strategic Studies at Peking University.
Professor Guan has Ph.D. degree from the Moscow State Institute of International Relations (1997), MA (1993) and BA (1988) from Peking University. Also, he was a visiting scholar at the University of Minnesota (2004-2005) and a visiting professor at the University of Vienna and the University of Wurzburg (2012-2013).
His academic interests lie in the fields of Russian diplomacy, Sino-Russian relations, SCO and Central Asian countries.
His publications include: Russia and West—From Alexander to Putin: The honor in IR（ Interpreter）(Shanghai Renmin, 2017)；History and the today’s Sino-Russian Relations(Editor, The Second series) (Shekewenxian,2009)；Yeltsin’s Years in Power (co-author)(Henan Wenyi Press, 2000) and other articles in Chinese, Russian, English, Korean and Japanese.
Professor Guan is also a director of the Center for Modern Russian Studies of PKU, a Vice-President of Chinese Institute of History of Sino-Russian Relations and an editor board member of the academic journal ‘Region’（Indiana, US）.

Rana Mitter is Professor of the History and Politics of Modern China, and a Fellow of St Cross College at the University of Oxford. He is the author of several books, including China’s War with Japan: The Struggle for Survival, 1937-1945 (Penguin, 2013), [US title: Forgotten Ally] which won the 2014 RUSI/Duke of Westminster’s Medal for Military Literature, and was named a Book of the Year in the Financial Times and Economist. His latest book is China’s Good War: How World War II is Shaping a New Nationalism (Harvard, 2020). His recent documentary on contemporary Chinese politics "Meanwhile in Beijing" is available on BBC Sounds.  He is co-author, with Sophia Gaston, of the report “Conceptualizing a UK-China Engagement Strategy” (British Foreign Policy Group, 2020).  He won the 2020 Medlicott Medal for Service to History, awarded by the Historical Association.  He is a Fellow of the British Academy and an Officer of the Order of the British Empire.

Yulia Nikitina is Associate Professor of the Department of World Politics and Leading Research Fellow of the Center for the Eurasian Studies at MGIMO University.
Yulia Nikitina is a specialist of security politics in Eurasia with a focus on regional organizations and Russian approaches to conflict-settlement. Yulia Nikitina co-authored the FES report “Islands of cooperation” (2018) and the RAND report “Getting Out from “In-Between”: Perspectives on the Regional Order in Post-Soviet Europe and Eurasia” (2018). She has participated in numerous Track-II working groups the settlement of regional conflicts in Eurasia. Currently, she co-organizes a series of policy events “Debates on the current issues” at MGIMO with participation of experts from different Eurasian countries.

Theresa Fallon is the founder and director of the Centre for Russia Europe Asia Studies (CREAS) in Brussels. She is concurrently a member of the Council for Security Cooperation in the Asia-Pacific, a Nonresident Senior Fellow of the Chicago Council on Global Affairs, Adjunct Professor at the George C. Marshall European Center for Security Studies, and a member of the CEPS Task Force on AI and Cybersecurity.
Theresa’s current research is on EU-Asia relations, maritime security, global governance, China’s Belt and Road Initiative, and great power competition. She has testified to the U.S. Congress, European Parliament Committee on Foreign Affairs, and Subcommittee on Security and Defense, and has been featured in international media.
Previously she was a Senior Associate with the European Institute for Asian Studies (EIAS) in Brussels and a member of the Strategic Advisors Group for the NATO Supreme Allied Commander Europe (SACEUR). From 2003 to 2007 she worked in Beijing as a researcher and consultant. From 1998 to 2003 she was the Moscow representative of PlanEcon, a research and consulting firm, and taught economics in the first MBA program established in Russia at the American Institute of International Business in Moscow. She was educated at the University of Chicago, and The London School of Economics and Political Science.
Her articles have appeared in American Foreign Policy Interests, The Asan Forum, Carnegie, CSIS Asia Maritime Transparency Initiative, China Brief, The Diplomat, ISN Security Watch, ORF, PlanEcon Energy, RUSI Newsbrief, War on the Rocks and other publications. [Moderator]

Got Questions? Ask them here in advance (beginning August 12) or during the program:

Online
Wed 18 Aug 2021
4 - 5 p.m.
Hong Kong Time
Calculate your local time »
Register Now
20210818T160000 20210818T170000 Asia/Hong_Kong Asia Society: Russia and China: Alliance, Entente or Collusion? In this discussion, speakers will focus on how the China-Russia relations has changed in the past 20 years, and the strategic partnership and convergence between both countries.