A Return to Offices? Comparing Approaches in Asia and the U.S. | Asia Society Skip to main content 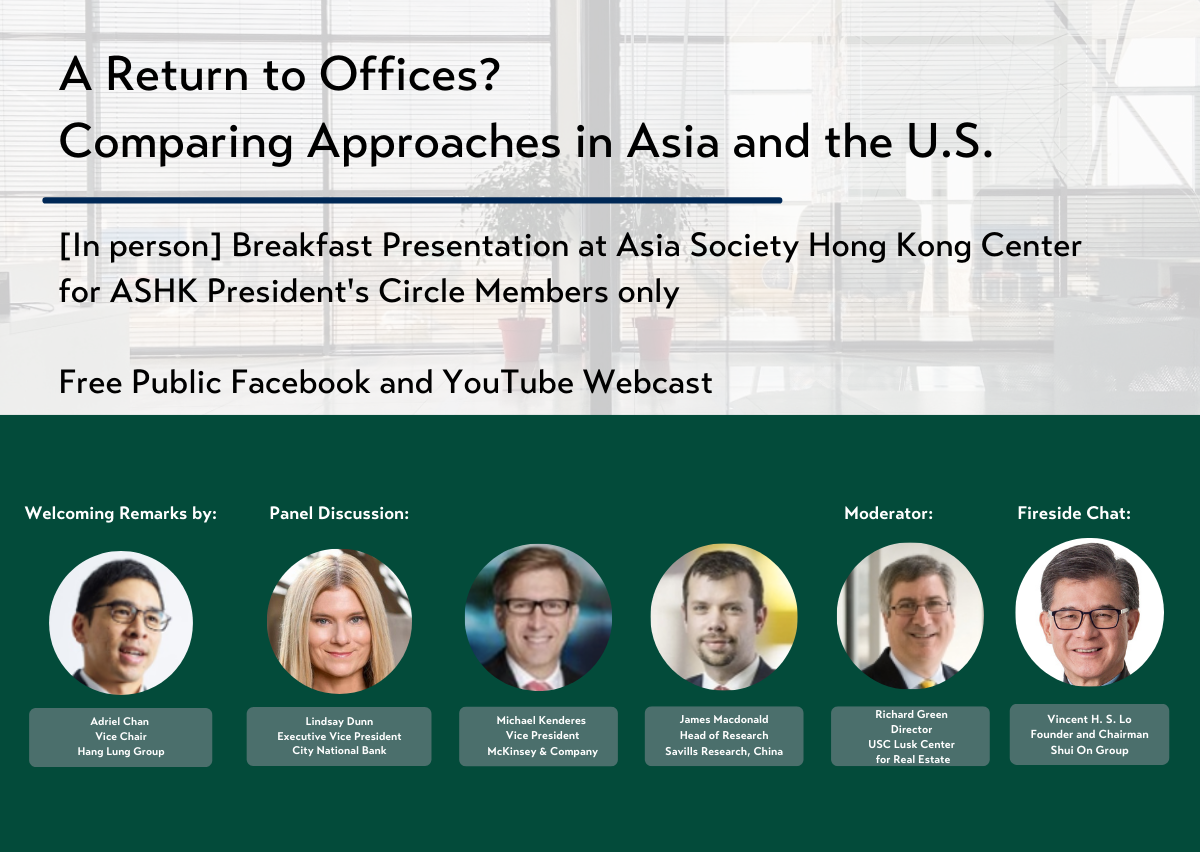 Got questions? Ask them here in advance (from June 23) or during the program:

As Shanghai re-emerges from a COVID-19 lockdown after two months, it presents another case study in how a major metropolitan area attempts to return to a semblance of normalcy. Across the globe, cities have been returning to work at their own pace, with office buildings filling up once again (or not) due to locality-specific regulations, company policies, and workers’ desires.

In Asia, Shanghai is in its nascent stage of easing restrictions. On the other hand, Singapore has kept a steady pace of re-opening, from relaxing regulations on foreign travel to phasing out the limits of employee numbers at offices. Across the Pacific in Los Angeles, office buildings are open and ready for workers, but remain sparsely populated.

With varied stages of safety protocols and attitudes toward the return to the office. What does this mean for the future of commercial real estate? Join Asia Society Southern California for its latest U.S. - Asia Real Estate webinar program, featuring experts on the subject from Shanghai, Singapore, Hong Kong to Los Angeles. The program will begin with a panel discussion including Lindsay Dunn, Executive Vice President and Head of Real Estate Banking at City National Bank, Michael Kenderes, Vice President of Real Estate at McKinsey & Company, and James Macdonald, Head of China Research at Savills.

The panel discussion will be followed by a fireside chat with Shui On Group founder and ASSC 2021 “Real Estate Visionary”  Vincent Lo, who will provide his insight on the topic from the perspective of both mainland China and Hong Kong, alongside Richard Green, Director of the USC Lusk Center for Real Estatem, moderating both conversations.

Asia Society Hong Kong Center is delighted to invite our President's Circle members to attend this program in person for a private breakfast.

Adriel Chan is the Vice Chair of Hang Lung Group and Hang Lung Properties. He joined the Group in 2010 and was appointed to the Board of the Company as Executive Director of Hang Lung Group Limited, in 2016. His responsibilities include oversight of the Development and Design Department, Project Management Department (including its asset assurance & improvement team) and Cost & Controls Department. He is also Vice President and Executive Committee member of the Real Estate Developers Association of Hong Kong. He also serves on councils, boards and advisory bodies of universities, which include: the University of Hong Kong, the Chinese University of Hong Kong and the Hong Kong University of Science & Technology (HKUST) Business School. He is also the Director of Academy of Chinese Studies, a member organization of the Our Hong Kong Foundation. He regularly presents at industry conferences such as MIPIM, Urban Land Institute, Guandian, and the International Council of Shopping Centers, and has also spoken for JP Morgan, the University of Southern California (USC), Asia Society, LinkedIn, and others.

Lindsay Dunn is Executive Vice President and Head of Real Estate Banking at City National Bank. She also serves on the bank’s Executive Committee. She is responsible for providing a wide range of financial services to real estate developers and investors in markets in which the bank operates. Her responsibilities include real estate lending, operations and business development in Southern California. She was recognized by the Los Angeles Business Journal in 2022 on its “Women of Influence: Finance” list, and in 2021, on its “Leaders of Influence: Lenders” list. She was also named in the Top Teams of American Banker’s most powerful women in banking in 2021. In addition, she was recognized by Bisnow as one of Los Angeles’ Power Women in 2019. She serves on the board of Imagine LA, an organization dedicated to helping families navigate their way out of poverty, and on the Executive Committee for USC Lusk Center for Real Estate. She is also a member of the International Council of Shopping Centers and Urban Land Institute.

Michael Kenderes is Vice President, Real Estate at McKinsey & Company. He has 32+ years of experience in the industry and an extensive track record in investment, property development and design & build, specializing in mixed use, retail, office, residential and industrial. Kenderes has 20 years of experience in Asia, especially Vietnam, Malaysia, China and Singapore. Prior to his 4 years at McKinsey, Kenderes spent 29 years at Lendlease with the last 8 years as Head of Development, Asia accountable for P&L.

James Macdonald was appointed as Head of Savills Research, China in 2007. He has the overall responsibility to ensure the successful delivery and expansion of Savills research capabilities as well as to consolidate and integrate all research activities across mainland China. The research team covers a wide range of cities and assets classes. The increased capabilities of the Research department will support the continuing expansion of the company in one of the world’s fastest developing nations, securing Savills position as a dominant player in the China real estate market. As the head of research James has spoken at numerous conferences hosted by PERE, REIW, MIPIM and ULI as well as various other chambers of commerce and investment banks. He is also frequently cited in both the trade press and mainstream business press. Originally from London, UK, Macdonald has lived and worked in Shanghai since 2002. Since joining Savills that year, he has been actively involved in the growth of the Research department, advising and liaising with numerous international and domestic developers, and financial institutions.

Vincent H. S. Lo is the founder and Chairman of the Shui On Group, and the Chairman of Shui On Land Limited and SOCAM Development Limited. Mr. Lo was awarded the Grand Bauhinia Medal in 2017, the Gold Bauhinia Star in 1998 and appointed Justice of the Peace in 1999 by the Government of the Hong Kong Special Administrative Region. He was named Businessman of the Year at the Hong Kong Business Awards in 2001, and won the Director of the Year Award from The Hong Kong Institute of Directors in 2002 and Chevalier des Arts et des Lettres by the French government in 2005. Mr. Lo was honoured with “Ernst & Young China Entrepreneur Of The Year 2009” and also, as “Entrepreneur Of The Year 2009” in the China Real Estate Sector. Mr. Lo was made an Honorary Citizen of Shanghai in 1999 and Foshan in 2011. In 2012, the 4th World Chinese Economic Forum honoured Mr. Lo with the Lifetime Achievement Award for Leadership in Property Sector.

In addition to his business capacity, he participated in the preparatory works of the establishment of the Hong Kong Special Administrative Region and had served as Chairman of Hong Kong Trade Development Council and Hong Kong Airport Authority. He currently serves as Member of the Board of Directors of Boao Forum for Asia, President of Council for the Promotion & Development of Yangtze, Honorary Life President of Business and Professionals Federation of Hong Kong.

Richard Green is the Director of the USC Lusk Center for Real Estate. He holds the Lusk Chair in Real Estate and is a Professor in the USC Sol Price School of Public Policy and the Marshall School of Business. Prior to joining the USC faculty, Green spent four years as the Oliver T. Carr, Jr., Chair of Real Estate Finance at The George Washington University School of Business. He was Director of the Center for Washington Area Studies and the Center for Real Estate and Urban Studies at that institution. Green also taught real estate finance and economics courses for 12 years at the University of Wisconsin-Madison, where he was Wangard Faculty Scholar and Chair of Real Estate and Urban Land Economics. He also has been principal economist and director of financial strategy and policy analysis at Freddie Mac.