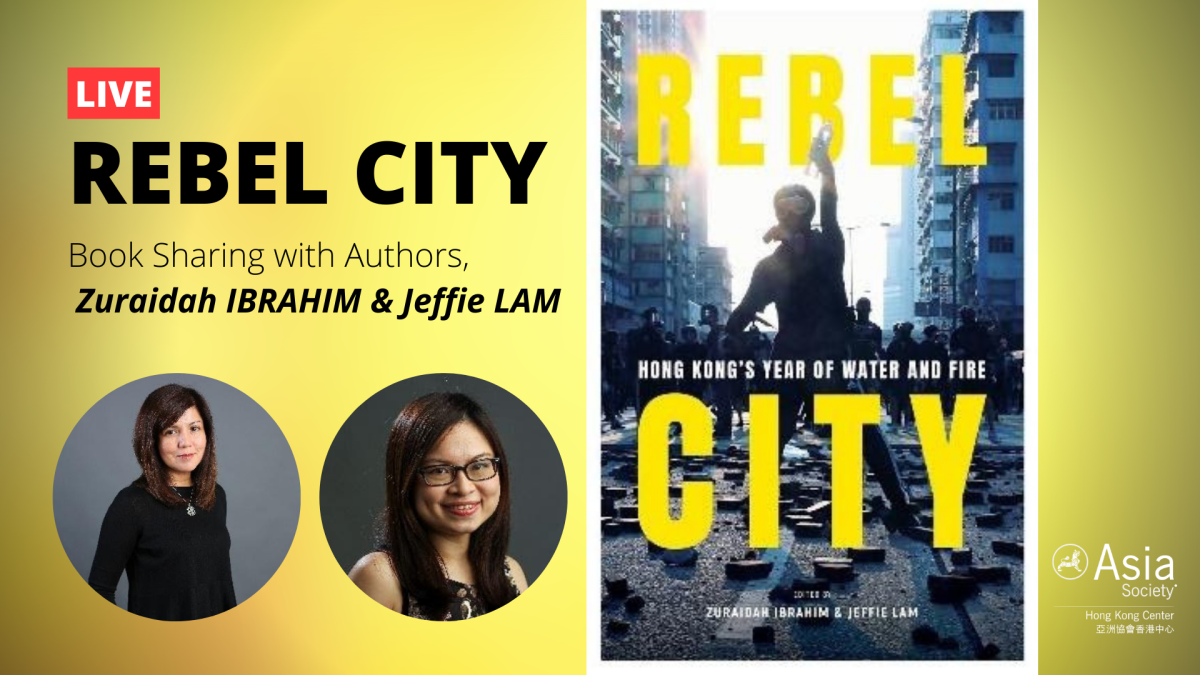 Tune in Thursday, September 10, at 8:00 p.m. Hong Kong Time, for a ASHK Members only webinar of this event. The registrants names will be shared by organizer.

South China Morning Post’s reporting team looks back at Hong Kong’s most impactful political crisis since its return to China in 1997 in a new book “Rebel City: Hong Kong’s Year of Water and Fire”.Anti-extradition bill protests rapidly morphed into a wider anti-government movement in 2019 that left virtually no aspect of the city untouched. The widespread demonstrations, which divided large swathes of society, continued in 2020 and served as a testing ground for a wide array of institutions, including the civil service, businesses and offices, the legal system, the police force, universities and schools that struggled to continue its services. Join us for an insiders’ view by SCMP’s Zuraidah Ibrahim and Jeffie Lam as they unpack a collection of essays chronicling the political confrontations gripping the city since June 2019 and uncovering a story of a society engulfed in trauma, bent and wounded, but displaying signs of surprising resilience. Moderated by Ms. Ying Chan, Former Founding Director of The University of Hong Kong’s Journalism and Media Studies Centre.

Zuraidah Ibrahim is deputy executive editor of South China Morning Post, Hong Kong's English news organisation. She oversees the city and international desks and also runs a Sunday magazine, This Week in Asia, which won the Best News Website award from WAN-IFRA in 2017. She was previously deputy editor of Singapore’s largest English newspaper, The Straits Times. She co-authored the book Lee Kuan Yew, Hard Truths to Keep Singapore Going (2011) and a monograph on the Singapore opposition (2017). She studied political science in Singapore and the United States.

Jeffie Lam is a correspondent at the South China Morning Post and the leader of the newspaper's Hong Kong politics team. She started her career as a political reporter after graduating from the University of Hong Kong with a Bachelor of Social Sciences degree in 2009, and joined the Post in 2013.

Jeffie mostly writes about the city's politics and social movement. She was a recipient of the 20th Human Rights Press Awards and had obtained a Master of Laws in Human Rights degree from HKU in 2016. Prior to the Post, she was a political reporter at chinese-language broadsheet Ming Pao.

Or enter event code #AS0910 at slido.com