The Post-Abe Era in Japanese Politics 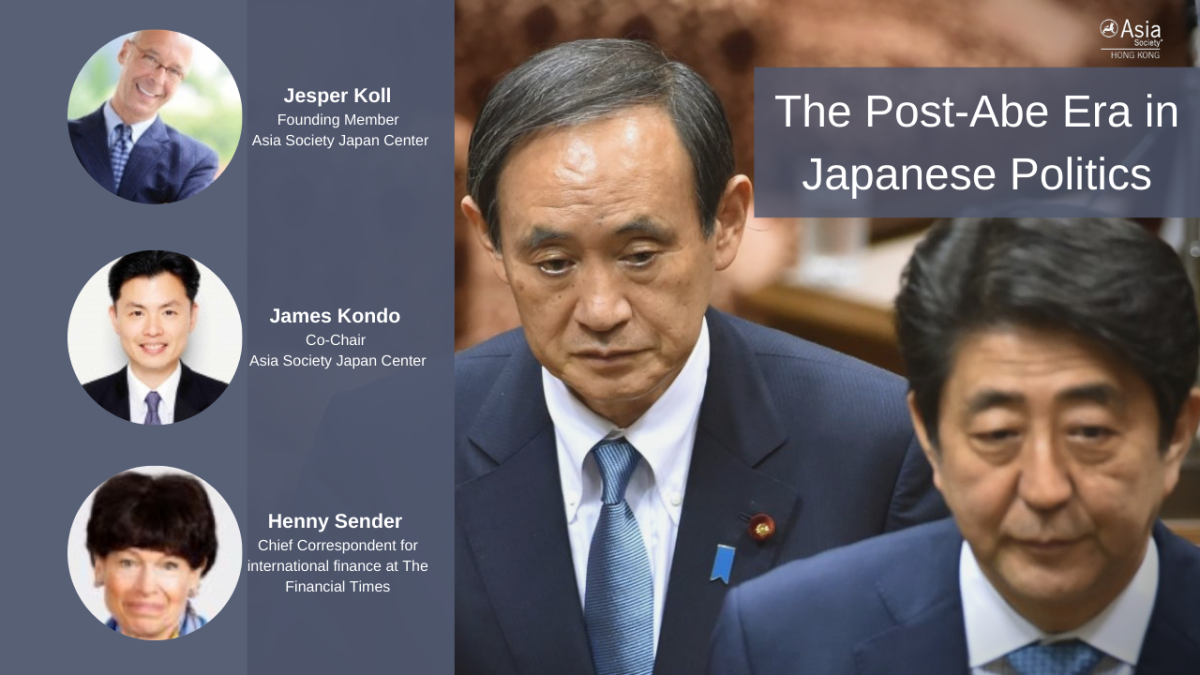 As Shinzo Abe’s reign is now over as the longest-serving Prime Minister in his country’s history, what are we to make of this new era in Japanese politics?  What are the goals and objectives that will be pursued by his successor, Yoshihide Suga? How will he govern the world’s third largest economy? What are Prime Minister Suga’s plans with respect to Japan’s digital landscape and technology sector? How will this new administration engage with the United States, China and the rest of the world?

On November 3, ASHK members can tune in for an in-depth analysis on all the above and more featuring the Chairman of the Board of the International House of Japan, James Kondo, and top-ranked Japan economist and strategist, Jesper Koll.  Chief Correspondent for international finance at The Financial Times, Henny Sender, will moderate this program.

The general discussion will be 40 minutes long, from 17:20 to 18:00 PM HKT.  President’s Circle and Corporate Members will also be invited to join an exclusive 20 minute virtual meet-and-greet with our two experts on the Land of the Rising Sun from 17:00 PM HKT.

Jesper Koll is a Founding Member of Asia Society Japan Center and has been researching and investing in Japan since becoming a resident in 1986. Over the past two decades, Jesper has been consistently ranked as one of the top Japan strategists/economists, having worked as Chief Strategist and Head of Research for major U.S. investment banks J.P. Morgan and Merrill Lynch. In July 2015, he was the founding Chief Executive Officer of WisdomTree Japan and now serves as senior adviser to WisdomTree Asset Management. His analysis and insights have earned him a position on several Japanese government and corporate advisory committees. In late-2016, Governor Koike appointed Jesper to her Tokyo Financial Center Advisory Board. He is also one of the few non-Japanese members of the Keizai Doyukai, the Japan Association of Corporate Executives; and serves on the Board of Governors of OIST, Okinawa Institute of Science & Technology. He has written three books in Japanese, Towards a New Japanese Golden Age, The End of Heisei Deflation, and the recently published Japan's Economy - The Envy of the World.

James Kondo is Co-Chair of Asia Society Japan Center, as well as Chairman of the Board of the International House of Japan, a nonprofit that promotes cultural exchange and intellectual cooperation. James is also President of Asia Pacific Initiative, Co-Chair of World Economic Forum Centre for the Fourth Industrial Revolution Japan, Co-Chair of Silicon Valley Japan Platform, Visiting Professor at Keio University, and Senior Advisor at Geodesic Capital. Previously, James was Vice President of Twitter Inc. and Chairman of Twitter Japan, Special Adviser to the Cabinet Office of the Government of Japan, and a management consultant at McKinsey & Company. He studied at Brown University, and graduated from Keio University and Harvard Business School. He has been recognized as a Young Global Leader by the World Economic Forum.

Henny Sender is Chief Correspondent for international finance at The Financial Times (FT), based in New York and Hong Kong. Before joining FT in 2007, she was The Wall Street Journal’s Senior Special Writer for Money and Investing, covering private equity and hedge funds. Prior to this, Ms. Sender spent 10 years in Hong Kong, covering regional finance for WSJ Asia and the Far Eastern Economic Review. She was part of a team at WSJ that won a Loeb award for coverage of the meltdown of the Amaranth hedge fund. She holds a Master’s degree from Columbia University School of Journalism and is a Council on Foreign Relations member. (Moderator)

Tue 03 Nov 2020
5 - 6 p.m.
Hong Kong Time
Calculate your local time »
Register Now
20201103T170000 20201103T180000 Asia/Hong_Kong Asia Society: The Post-Abe Era in Japanese Politics As Shinzo Abe’s reign is now over as the longest-serving Prime Minister in his country’s history, what are we to make of the current landscape and new era in Japanese politics?  What type of leadership will his successor, Yoshihide Suga