The Palace of Established Happiness

Restoring a Garden in the Forbidden City 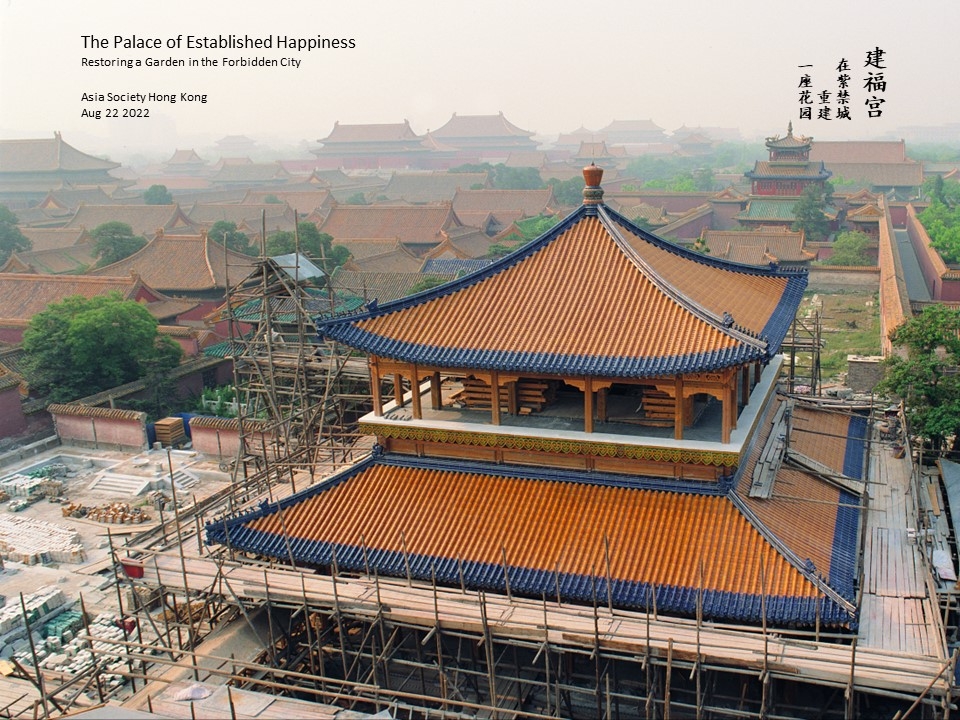 Got Questions? Ask them here in advance (beginning Aug 15) or during the program:

The Qing Emperor Qianlong considered gardens essential to a ruler’s mental and emotional well-being. His first private garden, commissioned in 1742 was at the Palace of Established Happiness (建福宮) in the northwest quarter of the Forbidden City. Filled with exquisite pavilions, weathered rocks, sunken courtyards and winding galleries, this Garden became Qianlong’s favorite retreat where he kept his most valued art collection. In 1923, when the deposed emperor Puyi still lived in the Forbidden City, the Garden was razed to the grounds by a mysterious fire. For three-quarters of a century, the devastated Garden laid unattended beneath a pile of rubble.

In 1997, the Hong Kong-based China Heritage Fund (CHF) finalized its offer to support a full reconstruction. This first ever large-scale construction project in the Forbidden City since the early 20th century was completed in 2005. CHF’s second collaboration with the Palace Museum is the reconstruction of the Hall of Rectitude Complex (中正殿) a large part of which was destroyed by the same 1923 fire. The Hall of Rectitude Prayer Compound was initiated in 1697 by Emperor Kangxi (Qianlong’s grandfather) to manage all court rituals of Tibetan Buddhist worship. Elaborate redesign and reconstruction by the very devoted Qianlong eventually turned the site into the official Tibetan Buddhist center for the Qing courts. The 14 structures in the complex also housed imperial production centers and repositories of a large collection of Tibetan Buddhist religious and art objects. Completed in late 2012, the Hall of Rectitude complex is now the “Research Center for Tibetan Buddhist Heritage” of the Palace Museum.

Ronnie C. Chan and Happy Harun will discuss CHF’s past and continuing efforts in the Forbidden City including the ongoing Hall of Mental Cultivation (養心殿) Research and Conservation project.

Happy Harun is the Project Director of the Hong Kong based China Heritage Fund whose inaugural endeavor is the 2000 reconstruction of the Garden of the Palace of Established Happiness (建福宮花園) in the Forbidden City, Beijing. This undertaking was the Palace Museum’s first ever large-scale reconstruction since the early 19th century, and the first entirely privately funded full collaboration between the Palace Museum Beijing and a second party. Happy was also in charge of the second collaboration on the reconstruction of the Hall of Rectitude Complex (中正殿) completed in 2012. She is currently at work on the Hall of Mental Cultivation (養心殿) Research and Conservation Project due for completion in 2023. In a career of over 20 years dedicated to the revitalization of Traditional Chinese Architectural artisanship, Happy has worked closely with Master Craftsmen across the 8 elemental disciplines of Traditional Chinese Architecture as well as 4 generations of Palace Museum leadership. Happy holds a BS and a MS degree from Stanford University.