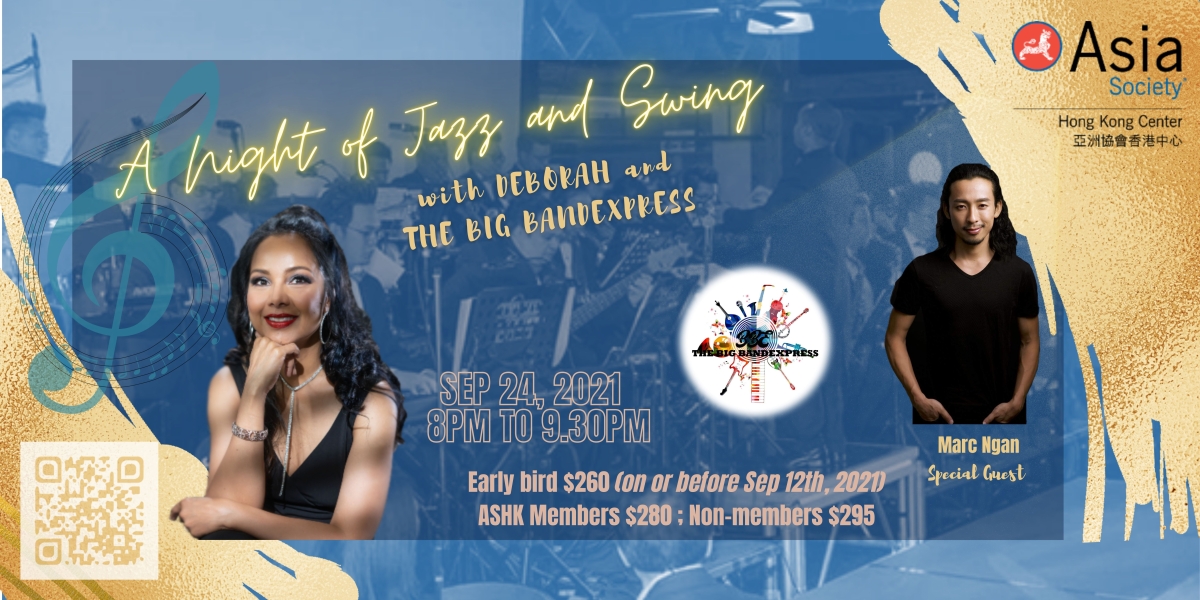 Deborah returns to Asia Society to bring you an evening of Jazz, Swing, Soul and originals, done in Big BandExpress Style!

DEBORAH MANNAS is a singer/songwriter, and one of the handful of female solo artists in Hong Kong who has independently produced two original albums, Inspired (2018) and Magician (2019), and three singles since 2020. Her works are a versatile mix of jazz, soul, funk, rock, and pop, which she has performed all over Hong Kong. Deborah has appeared multiple times on RTHK – The Works, Morning Brew, Afternoon Drive, and Uncle Ray, and interviewed with HKEJ, HK Confidential, Life on Lantau, and China News Agency, to name a few. With her versatile, broad range and unique style, her voice “catches you on the inside”, as one fan puts it. Deborah is the founder of IMTAC (I’m More Than a Cover) Magazine, to empower and inspire girls and young women.

THE BIG BANDEXPRESS There is nothing quite like the sound of a big band with its bright, crisp trumpets, warm trombones, and shimmering saxophones, all held together by a driving rhythm section of piano, guitar, bass, and drums. The phenomenally successful swing and dance bands of the 1930s gradually incorporated influences from Latin American and rock styles, and today, the big band sound regularly finds its way into TV, movie scores, and mainstream artists. The Big BandExpress, founded in 2016 by Trombonist Oliver Cura, continues the tradition. It is a 12 to 20 piece jazz orchestra, consisting of HongKong based elite musicians playing a wide range of musical styles as well as its own special arrangements of jazz standards and of Deborah’s originals.

MARC NGAN Born and raised in Melbourne, Australia, Marc Ngan moved to HK to follow his dream of working in the performing arts. He has a BTEC level 5 Higher National Diploma in Performing Arts (Musical Theatre) from Excel, HKAPA, being awarded the “Most Outstanding Student” when he graduated. He won the “Best Actor” award in 2017 at the 2017 HK English Language Drama Awards, is one of the most sort after performing arts tutors in Hong Kong, and one of HK’s top English-speaking MCs. He is also is a role player and management training coach for some of Hong Kong’s top corporate companies.

Click for directions
Buy Tickets
20210924T200000 20210924T213000 Asia/Hong_Kong Asia Society: A Night of Jazz and Swing with Deborah Mannas & The Big Bandexpress Deborah Mannas is back to grace the stage of our Jockey Club Hall! Get ready for the weekend with some jazz by Deborah, along with performance artist Marc Ngan and local band The Big BandExpress.