A New Stage: Opera after Covid 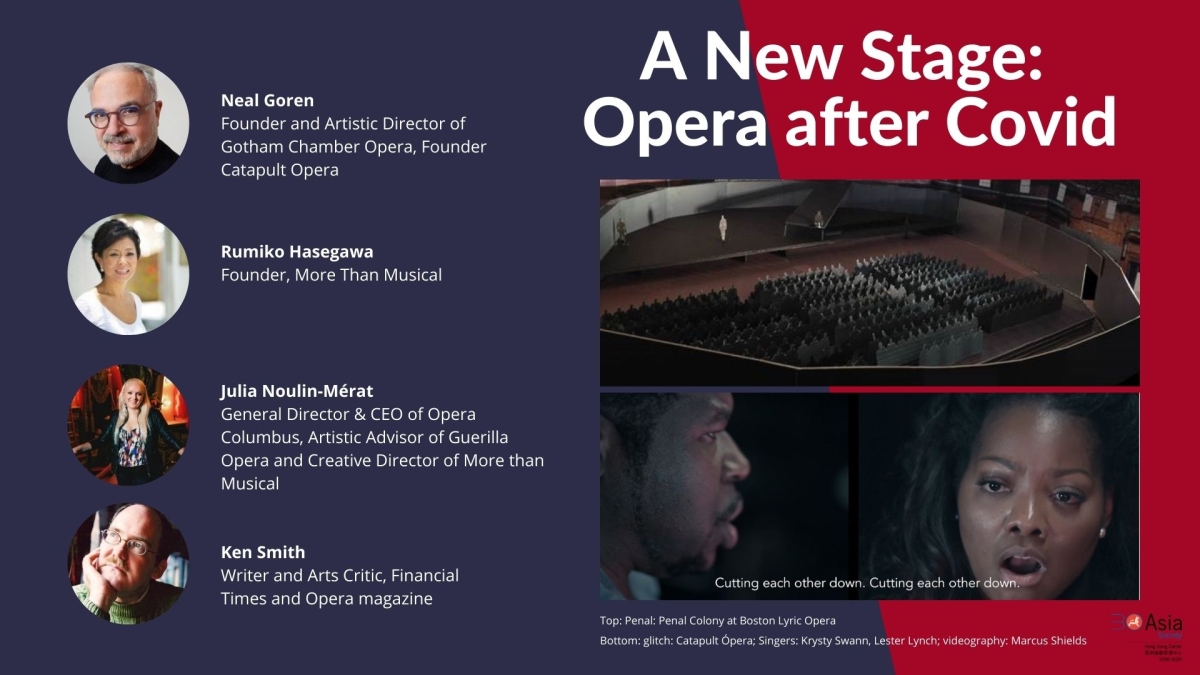 Even as the Metropolitan Opera, Covent Garden and other opera houses around the world remain shuttered from Covid-19, classical music’s least socially distant genre has taken fresh root in new media and alternative pandemic-resistant venues. Verdi in a sports arena? Wagner in a parking garage? Mozart in a drive-in cinema? And most universally, with the growing number of streaming services, a steady diet of nightly screenings in our own living rooms.

Operatic entrepreneurs Neal Goren (Catapult Opera, Gotham Chamber Opera) Julia Noulin-Mérat (Guerilla Opera, More than Musical, Opera Columbus) and Rumiko Hasegawa (More than Musical) share the challenges and opportunities confronting opera in the past year. Are video and film merely a placeholder for the pandemic, or a wave of the future. From travel restrictions to new staging protocols, these impresarios speak with arts critic Ken Smith (Financial Times, Opera magazine) about how much “Covid esthetics” will shape the future of the art form.

Neal Goren was the founder and artistic director of Gotham Chamber Opera, which popularized and legitimized the formerly ignored genre of chamber opera. Goren’s newest opera venture is Catapult Opera, a new company dedicated to communicating the power of opera through unique internet-based media and world-class live performance. Goren was conductor and music director for Mila, an original chamber opera by Eli Marshall and Candace Chong commissioned and developed by Asia Society Hong Kong, and has conducted standard operas, non-standard operas and premieres throughout the United States, Europe and Asia. As a recital accompanist, Goren has concertized extensively with Leontyne Price, among others. He is an associate professor at Mannes College, The New School for Music, and a frequent judge of national and international vocal competitions. His writings on opera and the arts have appeared in numerous books and periodicals.

In addition to being More Than Musical's Creative Director, for the past eight years, Julia Noulin-Mérat has been the Associate Producer at Boston Lyric Opera and is the co-Artistic Director of Guerilla Opera. Julia has worked on over 400 opera, theater, and television productions, including 25 new operas and 22 new plays, and is the principal designer at Noulin-Mérat Studio. Julia received OPERA America’s Women Opera Network mentorship distinction as well as the Leadership Intensive. Recent credit includes; Rigoletto (Minnesota Opera), Le Monde a l'Envers (Wolf Trap Opera), Tosca and Falstaff (Opera Omaha); Albert Herring (Curtis Institute); Gallo, Pedr Solis, and Troubled Water (Guerilla Opera); Sumeida’s Song and 27 (Pittsburgh Opera); The Kaiser of Atlantis (Atlanta Opera) and The Rake’s Progress, The Barber of Seville, and Pagliacci  (BLO). Other projects include a TedX talk on site-specific opera in the modern age; a Neverland (with China Broadway): a 50,000 square immersive theater piece in Beijing based on Peter Pan; and Playground (Opera Omaha) a touring operatic sound sculpture in collaboration with composer Ellen Reid.  http://www.noulinmerat.com

Rumiko Hasegawa founded More Than Musical in 2016 in Hong Kong to present immersive opera serving the city’s community of music-lovers. It commissions and stages condensed adaptation of classics in 90 minutes at a black-box theater. More Than Musical’s past performances of La Traviata in 2017 and The Kiss of Tosca in 2018 were well received. The next one is Carmen | Hong Kong in July 2021 at West Kowloon Cultural District. After she retired from a Goldman Sachs partner managing director, she followed her passion to share the magic moments of opera to wider audience. She served as a member of the board of Opera Hong Kong and currently is a member of the International Council of Metropolitan Opera.

Ken Smith has written about arts and culture on five continents for a wide array of print, broadcast and internet media. Since 2004 he has divided his time between New York and Hong Kong, where he is the Asian Performing Arts Critic of London’s Financial Times. Winner of the ASCAP Deems Taylor Award for distinguished music writing and a 2020 SOPA Award for arts and culture reporting, he is a regular commentator for RTHK Radio 4, a monthly columnist for Opera magazine of Shanghai, a contributor to London’s Opera magazine and a jury member for the International Opera Awards. He was a consultant to many cross-cultural projects, including David Henry Hwang’s bilingual Broadway comedy Chinglish, Bright Sheng’s Dream of the Red Chamber for San Francisco Opera, and Kung Fu, a musical based on the life of Bruce Lee for New York’s Signature Theatre. (Moderator)