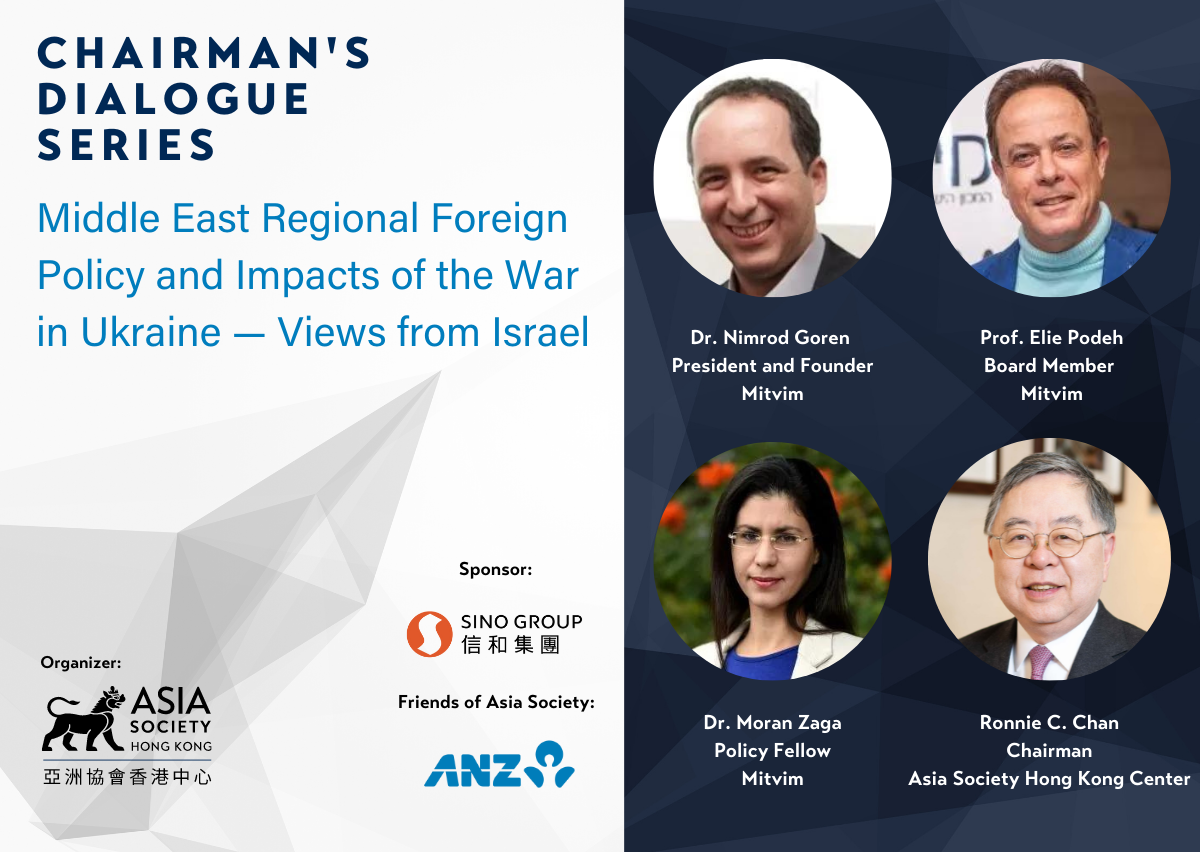 *Zoom detail will be emailed upon registration

Got questions? Ask them here in advance (from June 29) or during the program:

Nearly two years after the groundbreaking signing of the Abraham Accords in which Arab States established formal diplomatic ties to Israel, the Middle East continues to work toward maintaining and strengthening peace and stability in the region while collaborating on areas of shared interest. Meanwhile the war in Ukraine is impacting economic and diplomatic relations not only globally, but also in the Middle East.

Dr. Nimrod Goren is the President and Founder of Mitvim, and the Co-Founder of Diplomeds – The Council for Mediterranean Diplomacy. He teaches Middle Eastern Studies at the Hebrew University of Jerusalem, and is a Faculty Affiliate at Syracuse University’s Program for the Advancement of Research on Conflict and Collaboration (PARCC). He holds a Ph.D. in Middle Eastern Studies and Political Psychology from the Hebrew University and was a 2009-10 Hubert Humphrey Fellow (Fulbright Scholar) at Syracuse University’s Maxwell School of Citizenship and Public Affairs. He is the recipient of the Victor J. Goldberg Prize for Peace in the Middle East and the Centennial Medal of the Institute of International Education, and a former Visiting Fellow at JStreet. Nimrod was also named a Vamik Volkan Scholar by the International Dialogue Initiative and is a member of the Global Diplomacy Lab. He serves on the board of The Center for Enterprising Citizens and on the steering committees of the Geneva Initiative and the Turkish-Israeli Civil Society Forum. His areas of expertise include diplomacy, regional cooperation and peacemaking, with a focus on Israel’s foreign policy and regional relations, the Middle East peace process, and Turkish foreign policy

Elie Podeh is Professor in the Department of Islamic and Middle East Studies, the Hebrew University of Jerusalem. He serves as the President of the Middle East and Islamic Studies Association of Israel (MEISAI). Board Member of Mitvim – The Israeli Institute for Regional Foreign Policies. Main fields of interests: Egypt, inter-Arab relations, the Arab-Israeli conflict; education and culture in the Middle. Served as the Head of Islamic and ME Department (2004-2009) and editor of Hamizrah Hehadash (New East, 2000-2008). He has published and edited twelve books and more than seventy academic articles in English, Hebrew and Arabic. His recent publications: Multiple Alterities: Views of Others in Middle Eastern Textbooks (edited with Samira Alayan, London, 2018); The Third Way: Protest and Revolution in the Middle East (edited with Onn Winckler, Jerusalem, 2017) [Hebrew]; Chances for Peace: Missed Opportunities in the Arab-Israeli Conflict (Austin, 2015); The Politics of National Celebrations in the Arab Middle East (Cambridge, 2011).

Dr. Moran Zaga is a researcher and a lecturer in the Department of Geography and Environmental Studies at the University of Haifa. Her main research interests are political and social boundaries, the history of border in the Arab World and geopolitics of the Gulf States. Moran is a policy fellow at Mitvim – the Israeli Institute for Regional Foreign Policies. Her current study at Mitvim deals with the existing and potential cooperation between Israel and the United Arab Emirates. She is also a research fellow at the Chaikin Chair for Geostrategy at the University of Haifa. Research Areas: Geopolitics; Boundaries in the Middle East; Arab Gulf States; the history of the United Arab Emirates; UAE-IL relations