The Middle East: Present and Future — Perspectives from the Kingdom of Saudi Arabia | Asia Society Skip to main content

The Middle East: Present and Future — Perspectives from the Kingdom of Saudi Arabia 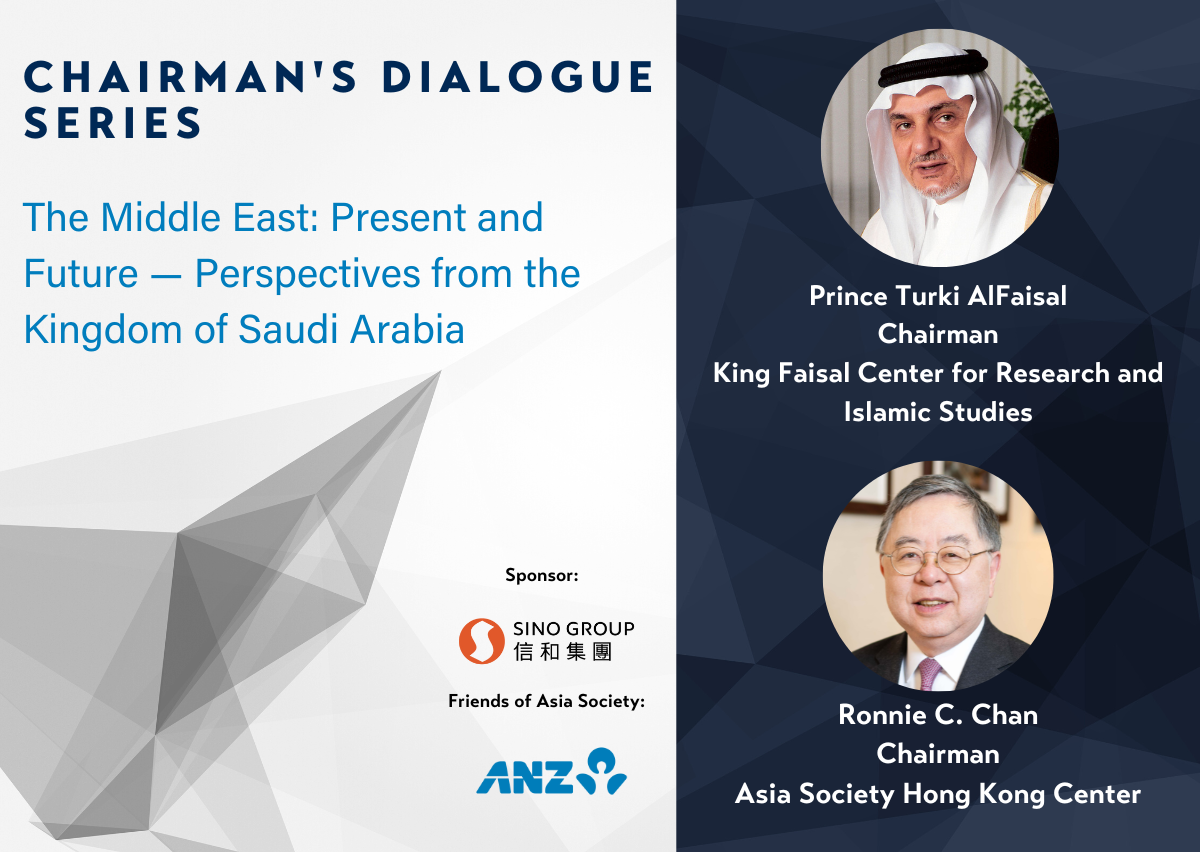 Asia Society Hong Kong Center is proud to present the Chairman’s Dialogue Series, a specially curated series of marquee events bringing together distinguished guests from around the world for conversations with Ronnie Chan, Chairman of Asia Society Hong Kong Center. In this conversation, Mr. Chan will be joined by His Royal Highness (HRH) Prince Turki Al Faisal bin Abdulaziz Al Saud, Founder and Trustee of the King Faisal Foundation and Chairman of the King Faisal Center for Research and Islamic Studies. This program will explore the present and future of the Middle East from the perspective of the Kingdom of Saudia Arabia (KSA).

Saudi Arabia is one of the largest economies in the Middle East, primarily driven by crude petroleum and natural gas activities. Meanwhile, since 2016, Saudi Arabia, has been undergoing significant change and transformation to support diversification of the economy away from oil, which is a primary economic object of the KSA’s Vision 2030. The vision not only impacts domestic policies, but the Middle East region in general. Questions will be explored including: How has Saudi Arabia transformed from both an economic and policy standpoint over the last 50 years? What is HRH’s vision for KSA as well as the region? What do the next 50 years look like for KSA? What are the interests of major powers such as the U.S., Russia, EU and China for the Middle East region? How does the present Ukraine war impact not only KSA but the entire Middle East region?

His Royal Highness (HRH) Prince Turki AlFaisal bin Abdulaziz Al Saud is the Founder and Trustee of the King Faisal Foundation and Chairman of the King Faisal Center for Research and Islamic Studies. HRH served as the Advisor at the Royal Court and as the Director-General of the General Intelligence Directorate (GID), heading Saudi Arabia’s main foreign intelligence service as Minister until 2001. HRH also served as the Saudi Arabian Ambassador to the United Kingdom and the Republic of Ireland, as well as the Saudi Arabian Ambassador to the United States of America. HRH has been an active participant to the World Economic Forum’s Annual Meeting, the Global Economic Symposium, and the Clinton Global Initiative’s Annual Meeting. HRH was a commissioner for the International Commission on Nuclear Non-proliferation and Disarmament, a joint initiative of the Australian and Japanese Governments. HRH was awarded Afghanistan’s highest honors, the Ghazi Mir Bacha Khan Medal, and a recipient of the Mediterranean Award for Diplomacy from the Fondazione Mediterraneo. HRH has served on the advisory bodies of several universities, institutes and think tanks, which include: the University of Oxford, Georgetown University, Trustees of the Library of Alexandria, the Beirut Institute, Trustees of the Council of Arab and International Relations, Directors of Al-Quds Fund and Endowment, the Munich Security Conference, Trustees of the Asia Society and Think20.