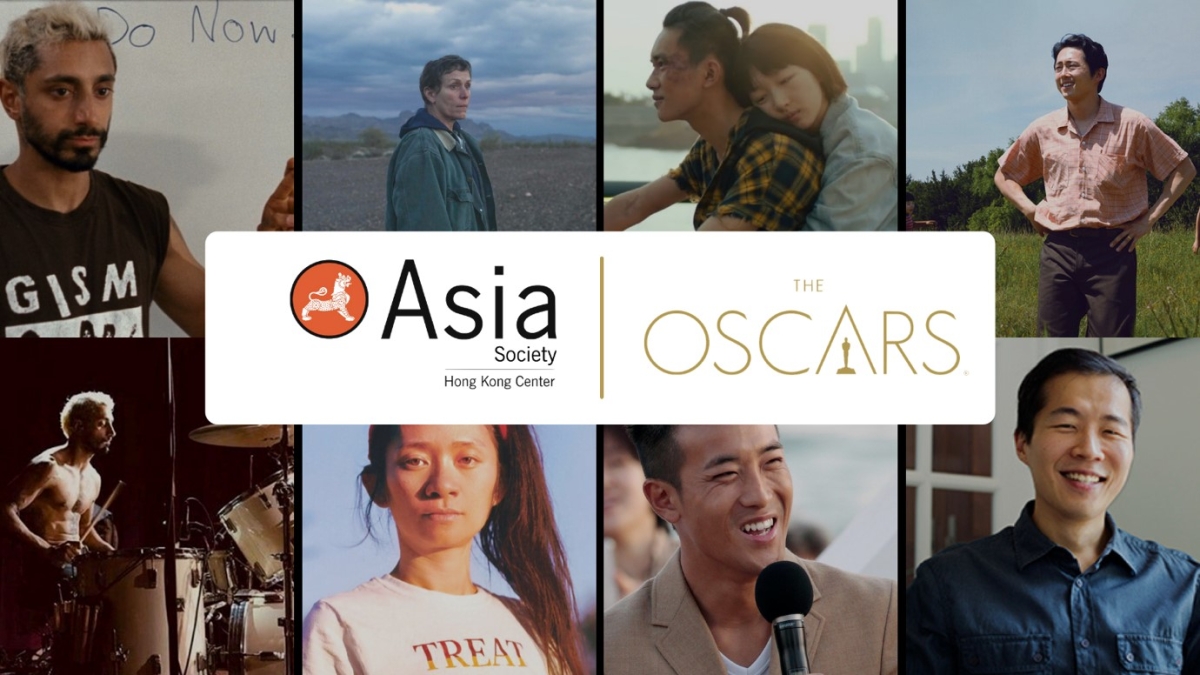 To be sure, 2020 was a year of turmoil and strife, but it also marks a cinematic milestone for the Asian community – and what better way to celebrate Asian diversity and representation than by hearing all that our local, young film talents have to share! Asia Society is delighted to present to you graphic designer and filmmaker Nicola Fan, filmmaker and educator Jeremy Hung, and composer Elliot Leung, who will be walking us through the awards, and sharing about their experiences in the industry too.

Please RSVP and take a guess at this year’s award winners! The best guessers win a $100 AMMO voucher.

From 08:00 AM on Monday April 26 (night of the Awards Ceremony in LA), we will host a member’s only Zoom discussion spanning topics from music composition to Asian film breakthroughs to opportunities for kids to get involved as filmmakers in Hong Kong. As results roll out, we will spotlight our bright young talents in the film industry who will comment on the Oscars, as well as their own projects. Throughout the event, all members will be able to share their video and audio in a fully interactive format. As we reach the end of the Oscars, we will announce the winners of the guessing contest. It will be a casual and informal gathering, so feel free to join, leave and re-join the Zoom at any time!

*The Zoom sharing will end at either 11:00 AM or whenever we determine our top Oscar guessers, whichever sooner!

Nicola Fan is a Hong Kong based graphic designer and award-winning filmmaker. Selected by Werner Herzog, she is 1 of 50 international filmmakers to participate in his 2021 Film Accelerator Lab at the Amazon of Colombia. Her latest short film DAFFODIL, was awarded Best Short Film Cinematography at 2019 European Cinematography Awards, Best Fantasy Film and Best Female Director at 2019 Independent Shorts Award. Her first feature length documentary SHE OBJECTS, was official selection at 2016 Sundance Film Festival Hong Kong. It was awarded Best Scientific & Educational Documentary at 2017 Nice International Film Festival. Recommended by Hong Kong International Film Festival, her music video THE EVE, was sponsored by CreateHK to be sent to film festivals worldwide from 2014—2015. She graduated from Rhode Island School of Design, with a BFA in Graphic Design.

Jeremy Hung is a Chinese-American filmmaker and educator from Hong Kong. He has experience working in the local, American, and German film industries, and is a graduate of New York University's Tisch School of the Arts. Jeremy's work has been recognized by institutions such as American Cinema Editors, Asian Film Awards Academy, and Chinese American Film Festival. As the founder of Babel Film Workshop, Jeremy aims to make filmmaking accessible to all students in Hong Kong. He most recently completed an arts residency at Yale University as a Yale-China Arts Fellow.

Elliot Leung is a film composer best known for the 4.5 billion box office wonder, Operation Red Sea. His other notable works include mega blockbusters like The Rescue and The Battle at Lake Changjin. Leung works very closely with director Dante Lam, and has also collaborated with many other notable artists; namely actress Xin Zhilei (Brotherhood of Blades), Art Director Martin Laing (The Titanic, Pearl Harbour) and DP Peter Pau (Crouching Tiger Hidden Dragon). Since 2014, Leung's music has been played back more than 10,000,000 times on major televised platforms like CCTV, TVB, HKBN and NowTV. His music is released by Milan Records and Sony Classical.