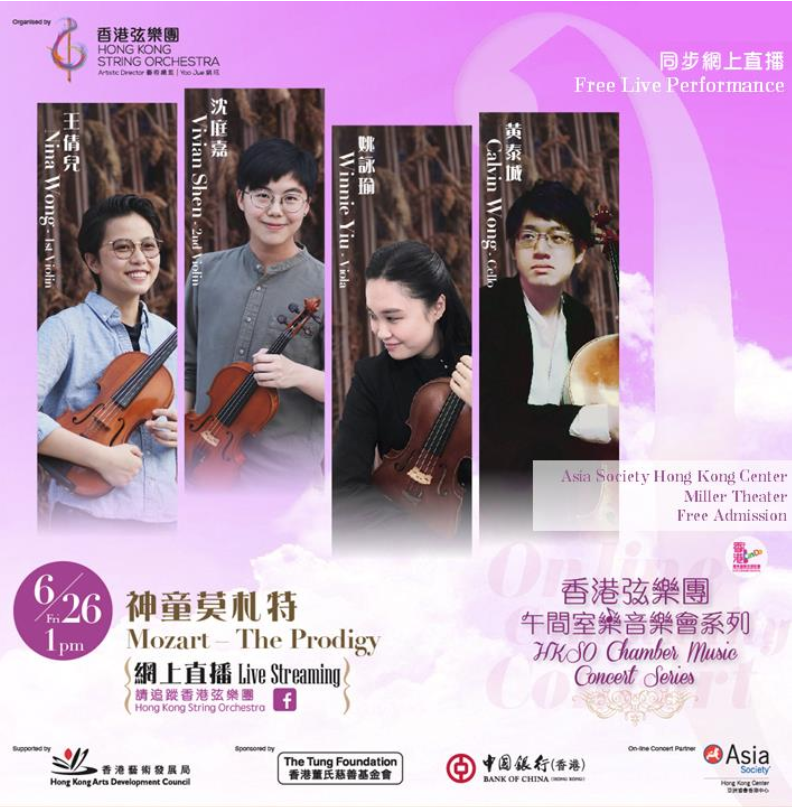 Mozart was hailed as ‘Child Prodigy’ and wrote his first composition at the age of 6. He was gifted in both performing and composition. Through this concert, we can enjoy the delightfulness and elegance of Mozart’s music. In this all-Mozart concert, the three vivid and energetic string quartets bring you Mozart’s exuberant joy in life. Beginning with the cheerful and exciting morning in ‘The Hunt’, his music takes you to a garden with flowers dances and delights in ‘Spring’, and the light-hearted mood of ‘Divertimento’ can sweep away your restless thoughts and uplift your spirit!

Nina Wong was the winner of the Cultural Affairs Bureau Prize in the 28th Macao Young Musicians Competition in 2010. She toured with the Asian Youth Orchestra in 2013 as the Concertmaster. She received her Master of Music degree and Bachelor of Music degree at The Hong Kong Academy for Performing Arts in 201 8 and 2016, under the tutelage of Ivan Chan. She was the Fellow Artist of Bowdoin International Music Festival 2018. Nina is also the founder and violinist in Virtus Quartet, which won the Second Prize in the 5th International Chamber Music Festival in Shanghai.

Born in Taipei, Vivian Shen began studying violin at the age of five. She entered the Hong Kong Academy for Performing Arts to further his study under Prof. Michael Ma in 2013 and graduated with first class honor, now in her second year of the Master of Music program. Vivian has participated in masterclasses with Maxim Vengerov, Cho Liang Lin, Ray Chen, Christoph Poppen and Robert Chen. She has also joined many music camps and music festival during the summer, such as Prague Arts Festival in Czech in 2007.

Winnie Yiu is a violist born in Hong Kong who started learning violin at the age of 11 then switched to viola when she was 17. Yiu never got a private teacher until she started studying her undergraduate degree at the Hong Kong Academy for Performing Arts. She is currently under the tutelage of Dr. Felix Ungar since 2016 summer. Yiu has been nominated by HKAPA to be awarded the Breguet Trey Lee Performing Arts Scholarship 2017/18.

Calvin Wong began studying the cello at the age of six. He earned his bachelor’s degree at the Hong Kong Academy for Performing Arts with Laurent Perrin and is currently studying for his master’s degree at the Hochschule für Musik und Darstellende Kunst, Frankfurt am Main, with Jan Ickert. He has taken master classes with Josef Schwab, Peter Serkin, Vladimir Mendelssohn, the Shanghai Quartet, the Endellion String Quartet, the Borromeo Quartet, and the Miami Quartet.

Click for directions
Register Now
Free admission; Limited Seats; Online Registration Required
20200626T130000 20200626T140000 Asia/Hong_Kong Asia Society: Lunchtime Concert: Mozart – The Prodigy  Mozart was hailed as ‘Child Prodigy’ and wrote his first composition at the age of 6. He was gifted in both performing and composition.