For the Love of Broken Porcelain: The Delhi Hoard | Asia Society Skip to main content

For the Love of Broken Porcelain: The Delhi Hoard 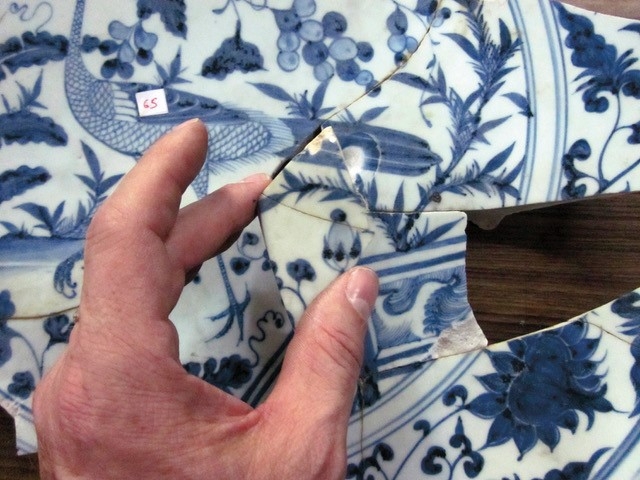 Although less well-known than the famous collections of Yuan dynasty (1272-1368) porcelain in the Topkapi Museum in Istanbul and the National Museum of Iran in Teheran, the similar trove in New Delhi, discovered in 1960 on the grounds of a 14th century palace by the Horticulture Branch of the Archaeological Survey of India, is roughly twice as large as either of the other collections. We follow the stories of Ellen Smart, Aprajita Sharma and Steven Gaskin to learn how they were lured to these pieces and how they shared their discoveries. Their article is published in the September/October 2021 issue of Orientations.

Ellen Smart holds an M.A. in South Asian Studies (University of California at Berkeley) and a Ph.D. in the Art and Archaeology of South Asia (University of London).  Her publications and lectures focus on Mughal painting, as well as Mughal textiles, gardens, women, and jewellery, and include a children’s book about Akbar.  Dr. Smart was awarded NDEA-NDFL grants to study Hindi-Urdu at the University of California, Berkeley, and at the University of Pennsylvania. She was a Fellow in the History of Landscape Architecture Studies at Dumbarton Oaks, Harvard University, and was awarded a Fulbright Research Grant in the Islamic Civilization Program for research in Great Britain, India, Pakistan, Thailand and Japan.  As curator of South Asian Art at the San Diego Museum of Art, she organized and catalogued the Edwin Binney 3rd Collection of South Asian works on paper, a world-renowned collection of South Asian paintings.

Aprajita Sharma is Assistant Archaeologist at the Archaeological Survey of India (ASI). She has been involved in a number of projects and exhibitions including ‘Gallery of Confiscated and Retrieved Antiquities’ at Purana Qila, Delhi, ‘Museum on Mahatma Gandhi’ at Aga Khan Palace in Pune’, ‘Hoard of Chinese Porcelain - A Rare Discovery from Feroz Shah Kotla’, ‘Kēśavinyās - Hairstyles in Ancient Indian Art’ and ‘Treasures of Ancient China’. Dr. Sharma has also worked on explorations at Loktak Lake, Imphal (Manipur) and Elephanta Island (Maharashtra). She holds a Ph.D. from Assam University, Silchar (Assam) and has published a number of research papers and articles on porcelain findings in India, varieties, etc. Dr. Sharma is currently working on porcelain collections in the museums under the purview of the ASI.

Steve Gaskin is President of the Asian Art Society of New England. After graduating from M.I.T., Mr. Gaskin served for four years in the United States Navy, as a Gunnery, Electronic Warfare, and Intelligence Officer aboard a guided missile cruiser in the Pacific Fleet. He began studying Chinese painting while in the Navy.  In 1995, Mr. Gaskin joined the Friends of Asiatic Art at the Boston Museum of Fine Arts and was one of the founders of the Asian Art Society of New England, of which he has been President ever since, in 2000.

Online
Mon 27 Sep 2021
6 - 7 p.m.
Hong Kong Time
Calculate your local time »
20210927T180000 20210927T190000 Asia/Hong_Kong Asia Society: For the Love of Broken Porcelain: The Delhi Hoard Follow the stories of Ellen Smart, Aprajita Sharma, and Steven Gaskin to learn how they were lured by the world's largest collection of Yuan dynasty blue-and-white porcelain, and their discoveries.