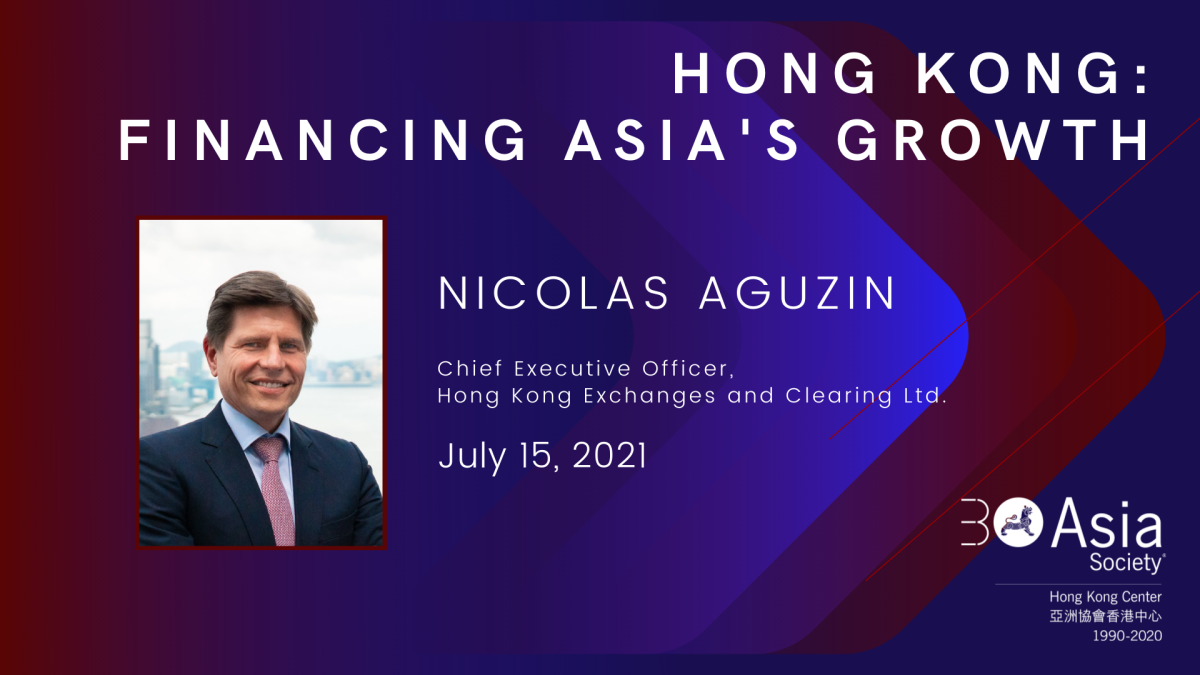 Hong Kong is a global financial center that attracts foreign investment, international talent, and mainland capital. Even during Covid-19, it has continued to attract corporates seeking growth and funding. Hong Kong Exchanges and Clearing Limited, one of the world’s largest exchange groups and one of the world’s leading IPO venues, plays a key role in driving the prosperity of Asian capital markets and the broader financial community.

The seven-fold increase in HKEX’s revenue in the past 21 years demonstrates the growth and maturation of Hong Kong's financial markets and points at the potential for further growth. How is Hong Kong unique as an international financial center? What role does it play in connecting China's companies with the rest of the world? How has it maintained growth even during turbulent times? Come join us on July 15 with Nicolas Aguzin, Chief Executive Officer of HKEX, for his insights and strategies. The discussion will be moderated by Ronnie C. Chan, Chairman of Asia Society Hong Kong Center.

From 2013 to 2020, Mr. Aguzin was CEO, J.P. Morgan, Asia Pacific where he was responsible for all the firm’s business across 17 markets. Mr. Aguzin presided over some of the firm’s major expansion efforts during the period, including establishing itself in China as one of the few international financial institutions with a full range of services and capabilities; including a fully-owned locally incorporated commercial bank, a majority-owned securities company, an asset management company and a futures and options company. Concurrent with his Asia CEO role, Mr. Aguzin also ran J.P. Morgan’s Investment Banking division in Asia. During his tenure, the bank rose to become one of the leading investment banks in the Asia Pacific region.

Mr. Aguzin holds a bachelor's degree in Economics from the Wharton School of the University of Pennsylvania in the U.S. and is fluent in Spanish, Portuguese, and English.

Ronnie C. Chan is Chairman of Hang Lung Group Limited and its subsidiary Hang Lung Properties Limited, both publicly listed in Hong Kong. The Group expanded into mainland China in 1992, developing, owning, and managing world-class commercial complexes in key tier one and tier two cities. Mr. Chan co-founded Morningside, an international investment group established in 1986 with venture capital and private equity investments in manufacturing, TMT, and biotechnology. He also founded and chairs the China Heritage Fund, is a co-founding Director of The Forbidden City Cultural Heritage Conservation Foundation, Beijing, and he is former Vice President and former Advisor of the China Development Research Foundation in Beijing. Mr. Chan is a Fellow of the American Academy of Arts and Sciences, Chairman Emeritus of Asia Society and Chairman of its Hong Kong Center, and Co-Founder and Chairman of the Centre for Asian Philanthropy and Society. He serves or has served on the governing or advisory bodies of several think tanks and universities, including Peterson Institute for International Economics, World Economic Forum, East-West Center, Pacific Council on International Policy, Eisenhower Fellowships, The Maureen and Mike Mansfield Foundation, University of Southern California, Indian School of Business, The Hong Kong University of Science and Technology, Yale University, Tsinghua University, and Fudan University. (Moderator)