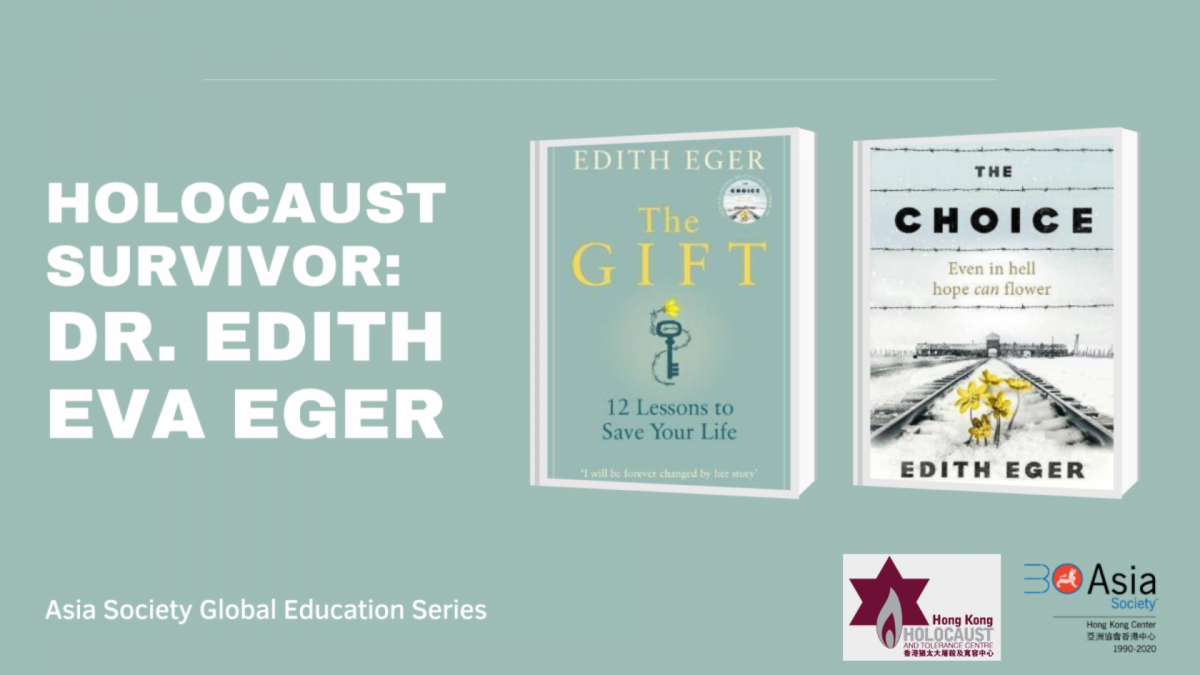 International Holocaust Remembrance Day is the annual international memorial day designated by the United Nations to commemorate the tragedy of the Holocaust. To mark this event and also the 76th anniversary of the Liberation of Auschwitz by the Red Army in January 1945, Asia Society Hong Kong Center in partnership with the Hong Kong Holocaust and Tolerance Centre (HKHTC) are delighted to virtually host Dr. Edith Eva Eger as a special webinar guest on this occasion. Dr, Eger will share her remarkable story of survival against all odds and her powerful tips for coping through uncertain times.

A native of Hungary, Dr. Edith Eva Eger was just 16 years old in 1944 when she experienced one of the worst evils the human race has ever known. As a Jew living in Nazi-occupied Eastern Europe, she and her family were sent to Auschwitz, the heinous death camp. Her parents lost their lives there. She and her sister survived even though they were subjected to horrible treatment by Dr. Josef Mengele and survived the Death March in Austria. In 1949 she and her young family moved to the United States. In 1969 she received her degree in Psychology from the University of Texas, El Paso. She then pursued her doctoral internship at the William Beaumont Army Medical Center at Fort Bliss, Texas. She has spent much of her professional time working with members of the military helping them to recover from, and cope with, the ongoing effects of PTSD. Dr. Eger has always found ways to use her personal experiences to inspire, educate and help others. Dr. Eger has a clinical practice in La Jolla, California where she uses her past as a powerful analogy to inspire people to reach their potential and shape their destinies. In the fall of 2017 at the age of 90, her memoir The Choice, Embrace the Possible was published. In her book, she details how the synergy of working with, and learning from, her patient’s perspectives has enriched her life experiences and outlook. The book focuses on moving forward in-light-of hardship, has received excellent reviews, was a New York Times Bestseller, is internationally acclaimed, and has been translated into more than thirty languages. The New York Times Book Review wrote: “Eger’s book is a triumph and should be read by all who care about both their inner freedom and the future of humanity.” Oprah said of the book “I will be forever changed by Edith Eger’s story.” As of March 2018, the book has received two book awards, one being from the national organization of the Jewish Book Council; the other The Christopher Award. Her second book, The Gift, Twelve Lessons to Save your Life was released in September 2020 and immediately became a best seller in the UK and Ireland. In this book she gives actionable advice to assist every person facing life’s difficulties in a positive and healthy manner. The Gift is being translated into more than twenty languages.