Geopolitics and Geo-economics — Perspectives From India 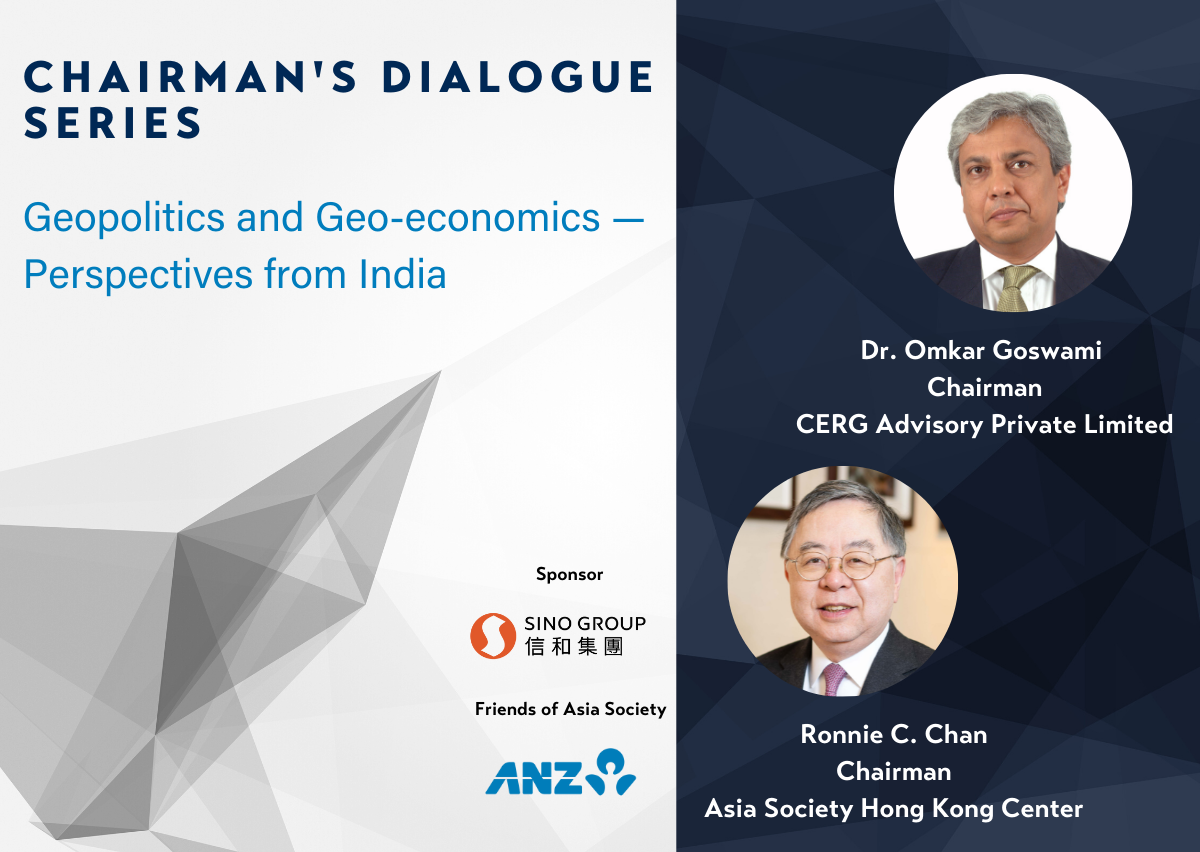 Asia Society Hong Kong Center is proud to announce the launch of the Chairman’s Dialogue Series, a specially curated series of marquee events bringing together distinguished guests from around the world for conversations with Ronnie Chan, Chairman of Asia Society Hong Kong Center. In this inaugural conversation, Mr. Chan will be joined by with Omkar Goswami, a professional economist and the Founder and Executive Chairman of CERG Advisory Private Limited, for a conversation on the current Geopolitical and Geo-economic situation in India.

Over the last 75 years, India, the world's largest democracy, has grown their economy to one of the world’s largest, while balancing domestic agendas as well as foreign relations. The IMF World Economic Outlook (April 2022), forecasts India’s real GDP growth to outpace both China and ASEAN-5 in 2022 and 2023. What is the geo-economic significance of India in the world and in the region? Simultaneously, India has significantly increased infrastructure spending in their latest fiscal year budget. What is the future of India’s domestic economy? Meanwhile, India recently signed a historical trade agreement with Australia. What is the geopolitical significance of India both globally as well as regionally, and what role does New Delhi wants to play? When examining India’s historical close ties to Russia/ the former U.S.S.R., versus the U.S. and China, how does New Delhi balance relations between Russia and the U.S., and is there hope for better India-China relations?

A professional economist, Dr. Goswami did his Masters in Economics from the Delhi School of Economics in 1978 and his D.Phil (Ph.D) from Oxford in 1982. He taught, collaborated and researched economics for 18 years at Oxford, Delhi School of Economics, Tufts, Jawaharlal Nehru University, Rutgers University and the Indian Statistical Institute, New Delhi. He was also the Editor of Business India from 1996 to 1998; and the Chief Economist at the Confederation of Indian Industry (CII) from 1998 to 2004. Dr. Goswami has been a consultant to the World Bank, the IMF, the Asian Development Bank and the OECD. He serves on the board of the following listed companies: Ambuja Cement, Godrej Consumer Products. From 2004, Dr. Omkar Goswami is the Founder and Chairman of CERG Advisory Private Limited.