[FULL] Dialogue with Uli Sigg: The Journey of a Businessman, Diplomat and Art Collector | Asia Society Skip to main content

[FULL] Dialogue with Uli Sigg: The Journey of a Businessman, Diplomat and Art Collector 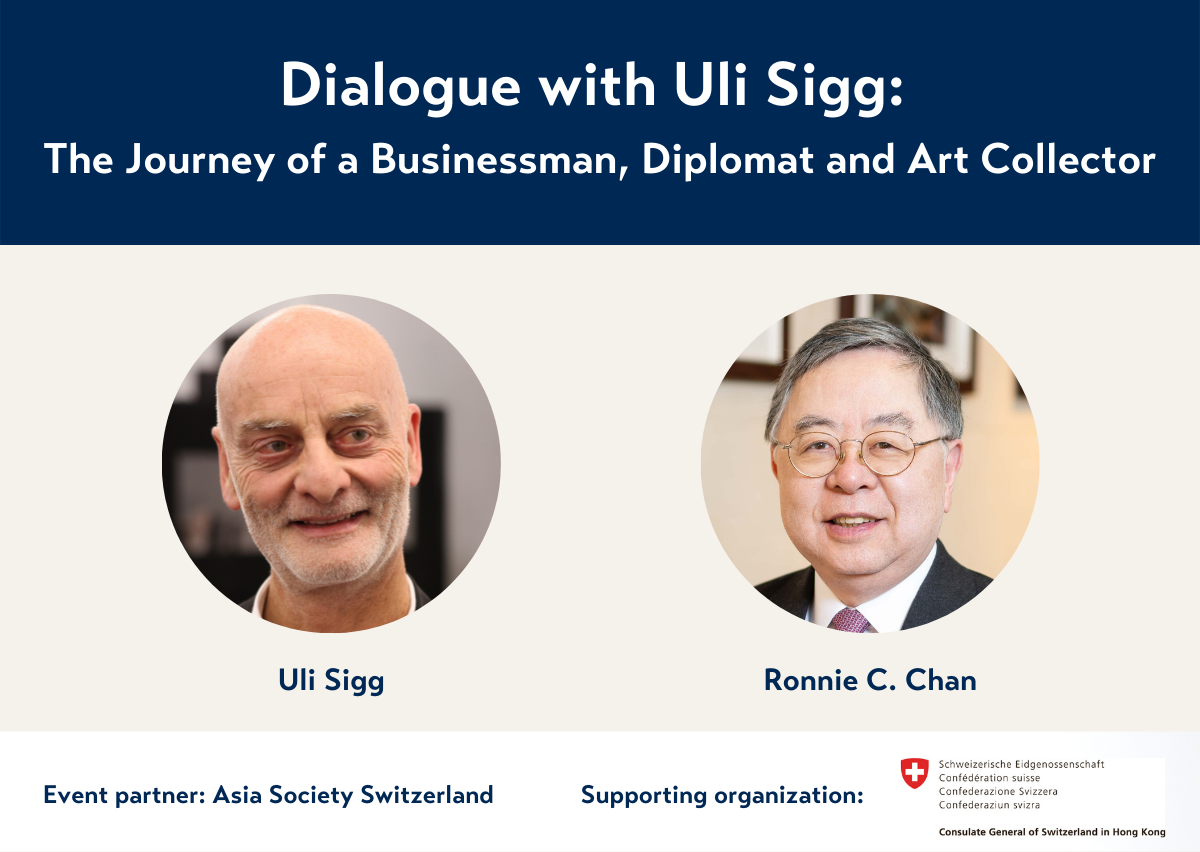 We apologize that this in-person program is full at the moment. You may sign up for the waitlist here.

As the former Swiss Ambassador to China, Uli Sigg was first brought to China through business, and further extends his career paths in politics and art. His venture in Asia is no less fascinating than a world traveler, as he became a contemporary art collector, in which he has formed 2,500 works of Chinese art collection around the globe.

Art presents the voices behind the artists and a reflection of the cultures and the environment. Uli Sigg started collecting Chinese contemporary art in a systematic way, which allows him to promote Chinese art on an international stage, and to get the artists voices heard. In 2012, he donated 1450 works to M+ Museum for Visual Arts in Hong Kong, as it unveils another chapter of modern Chinese art. What are some key take-away in his journey as a businessman and diplomat? What is his vision for the future art scene?

Join us for a vivid conversation with Uli Sigg, Asia Society Switzerland Board Member, and Member of the M+ Museum Board, International Council of New York Modern Art Museum MOMA and International Advisory Council of Tate Gallery. The dialogue will be moderated by Ronnie C. Chan, Chairman of Asia Society Hong Kong Center.

Join us at Asia Society Hong Kong Center for an in-person dialogue with Uli Sigg and Ronnie Chan.

Uli Sigg, born 1946, grew up in Switzerland. He completed his studies with a Ph.D. of the University of Zurich Law Faculty. He then worked as journalist and editor for various Swiss newspapers and magazines. From 1977 to 1990 he joined the Schindler Group where he held positions as Area Manager for Asia Pacific and later Member of the Group Executive Committee and Shareholders Board. He established in 1980 the first Joint Venture between China and the West and remained its Vice Chairman for ten years. He then served on the boards of a number of global companies till 1995 the Swiss federal government appointed him for four years ambassador to China, North Korea and Mongolia. Upon his return to Switzerland he again assumed the chairmanship or board membership of several multinational companies. Presently he also serves as Vice-President of the Ringier Media Group and as member of the Advisory Board of China Development Bank and other Chinese entities. He is Honorary Director of China Foreign Investment Association, Beijing and Board Member of Asia Society Switzerland.

As collector of contemporary art he has formed with 2500 works the most substantial collection of contemporary Chinese art in the world of which he donated in 2012 1450 works to M+ Museum for Visual Arts in Hong Kong. He is a member of the M+ Museum Board, the International Council of New York Modern Art Museum MOMA and International Advisory Council of Tate Gallery, London.

Got Questions? Ask them here in advance (beginning October 29th) or during the program:
https://app.sli.do/event/t6vdesbs (code: #DialoguewithUli)

Click for directions
Register Now
20211104T180000 20211104T190000 Asia/Hong_Kong Asia Society: [FULL] Dialogue with Uli Sigg: The Journey of a Businessman, Diplomat and Art Collector Former Swiss ambassador to China Uli Sigg reflects on his journey from being a businessman to becoming an avid contemporary art collector who has amassed a collection of 2,500 works of Chinese art.