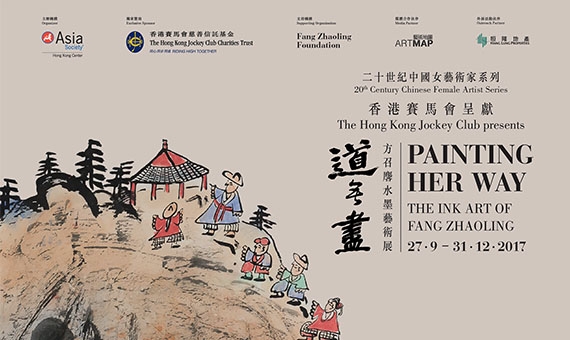 The Jockey Club Art Education and Female Empowerment Series “Painting Her Way: The Ink Art of Fang Zhaoling” Public Lecture Series brings together a selection of public lectures that highlight women in the field of art and culture who, like Fang Zhaoling, have dedicated themselves to promoting or establishing work that emphasizes the strength and accomplishments of women.

The artist Fang Zhaoling lived through the dramatic social and artistic changes of the twentieth century. Her painting career thus spanned the rapid developments of Chinese art from traditionalist, to modern, and finally to contemporary. Moreover, in addition to her home base in Hong Kong, she lived and spent extended periods of time in Japan, Southeast Asia, Europe, and the Americas, and was by education, experience, and inclination both thoroughly cosmopolitan and thoroughly Chinese. This talk, led by the exhibition curators Julia F. Andrews and Kuiyi Shen, will briefly survey the remarkable development of her unique personal style of ink painting in the context of the Chinese and international art worlds through which she passed.

Julia F. Andrews is a distinguished university professor in the Department of History of Art at The Ohio State University and the recent recipient of a Fulbright Fellowship. Her 1994 publication, Painters and Politics in the People's Republic of China,1949-1979 won the Joseph Levenson Prize of the Association for Asian Studies as the best book of the year on modern China. Her recent projects include Blooming in the Shadows: Unofficial Chinese Art, 1974-1985 (China Institute, 2011, New York), Light Before Dawn (Asia Society, Hong Kong Center, 2013), and Art of Modern China (with Kuiyi Shen, University of California Press, 2012), which was awarded the 2013 Humanities Book Prize of the International Convention of Asia Scholars. She was a 2016 Guggenheim Fellow.