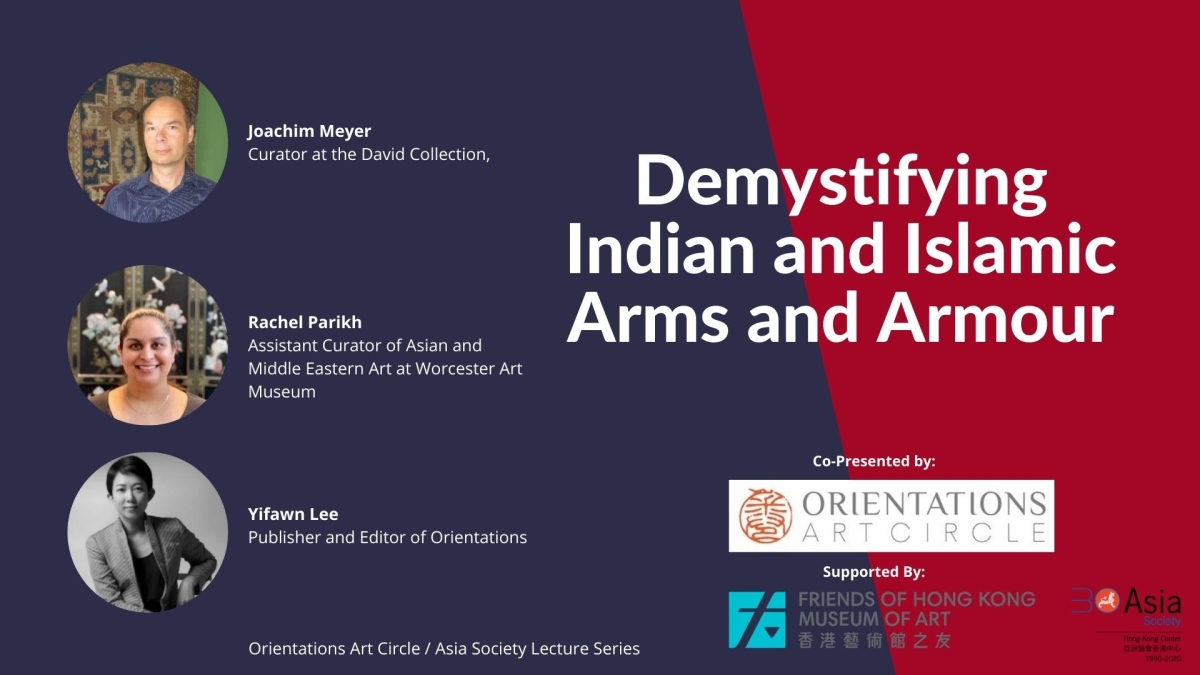 We are pleased to launch Orientations Art Circle at Asia Society with a new lecture series where we will mark the publication of the latest issue of Orientations magazine by inviting contributors to share the latest research from their articles. The March/April 2021 issue features two articles on Islamic and Indian arms and armour. The first by Joachim Meyer discusses objects in an exhibition opening on 26 March at the David Collection in Copenhagen titled, ‘Fighting, Hunting, Impressing: Arms and Armour from the Islamic World, 1500–1850’, which includes objects lent from public and private collections in Denmark. The exhibition presents some of the most important types of arms and armour from the Islamic world and puts them in the contexts of combat, hunting, and ceremonial usage. The second article by Rachel Parikh looks at the influence of animals on the decoration, form and function of South Asian arms and armour whether or not it is through symbolism orthe materials.

Joachim Meyer holds a Master and Ph.d. (1998) in Art History from the University of Copenhagen. Since 2002 he has been the curator at the David Collection, Copenhagen where he was engaged in the total refurbishment of the museum that reopened in 2009. He also edits the Journal of the David Collection, and directs exhibitions and catalogues in the David Collection, such as: Sensual Delights. Incense Burners and Rosewater Sprinklers from the World of Islam (2015), Shahnama, The Colourful Epic about Iran’s Past (2016) and The Human Figure in Islamic Art (2017). He has authored articles on Islamic metal objects from the western Mediterranean and published numerous publications on the subject of     Neapolitan drawings of the 17th-18th century.

Rachel Parikh is the Assistant Curator of Asian and Middle Eastern Art at Worcester Art Museum (Worcester, Massachusetts). She specializes in South Asian and Islamic painting as well as arms and armor. Prior to joining the Worcester Art Museum, Rachel worked at the Harvard Art Museums; the Metropolitan Museum of Art, New York; and the Art Institute of Chicago. She received her Ph.D. from the University of Cambridge.

Yifawn Lee is the publisher and editor of Orientations, a magazine featuring the latest scholarly research, market analysis, and current news in the field on the arts of East and Southeast Asia, the Himalayas and South Asia. In 2014, she founded Asian Art Hong Kong as a platform to provide art-related lectures and events. In 2018, she helped organize ‘The Blue Road: Mastercrafts from Persia’ at Liang Yi Museum and ‘From Two Arises Three: The Collaborative Works of Arnold Chang and Michael Cherney’ at The University Museum and Art Gallery of the University of Hong Kong. She currently sits on the advisory board of Liang Yi Museum.