China: The Bubble That Never Pops 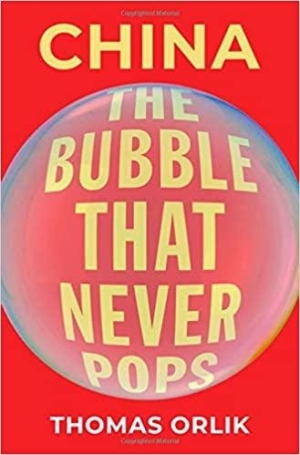 *In line with the latest tightening of the government’s social distancing measures, we are no longer able to hold the program in person. The program will now proceed as a Zoom webinar, 7pm-8pm, with the opportunity to interact with speaker Tom Orlik. In this circumstance, as a gesture of appreciation, we have a limited number of copies of Tom’s book “China: The Bubble That Never Pops” we will mail to registrants on a first-come, first-served basis. Upon registration, we will contact you for book mailing logistics.

China's economy, the story goes, is destined for failure, the financial bubble forever in peril of popping, the real estate sector doomed to collapse, and the factories fated for bankruptcy. And yet, against the odds and against expectations, growth continues, wealth rises, and international influence expands. The coming collapse of China is always coming, never arriving. In his new book, China: The Bubble That Never Pops, Bloomberg Economics’ Chief Economist Tom Orlik, a veteran of more than a decade in Beijing, turns the spotlight on China's fragile fundamentals and resources for resilience. Drawing on discussions with Communist cadres, shadow bankers and migrant workers, he pieces together a unique perspective on China's past, present and possible futures. From Deng Xiaoping's reform and opening to Donald Trump's trade war, he traces policy steps and missteps that have taken China up the global economic rankings, even as fears of a "Lehman moment" credit crisis grow. Mapping possible scenarios, he games out what will happen, if the bubble that never pops finally does. Perhaps more worrying to China hawks in the U.S., he explores what will happen in a more likely scenario where China continues to rise. In this evening program, Mr. Orlik will engage in conversation on his newly published book with Madeleine Lim, Senior Executive Editor at Bloomberg.

Thomas Orlik is Chief Economist for Bloomberg Economics, based in Washington, D.C. He previously was Chief Asia Economist for Bloomberg and China Economics Correspondent for The Wall Street Journal, based in Beijing. Prior to more than a decade in China, Mr. Orlik worked at the International Monetary Fund, British Treasury and European Commission. He is the author of Understanding China’s Economic Indicators, a guide to China’s economic data, and newly published China: The Bubble That Never Pops.

At the dawn of a new decade, the world’s most significant bilateral relationship continues to impact our geopolitical future and dominate headlines. The series convenes renowned thought leaders to demystify the trajectory of China-U.S. relations. Only a 20/20 vision derived from deep connections between peoples, leaders and institutions of the two superpowers can ensure global stability.