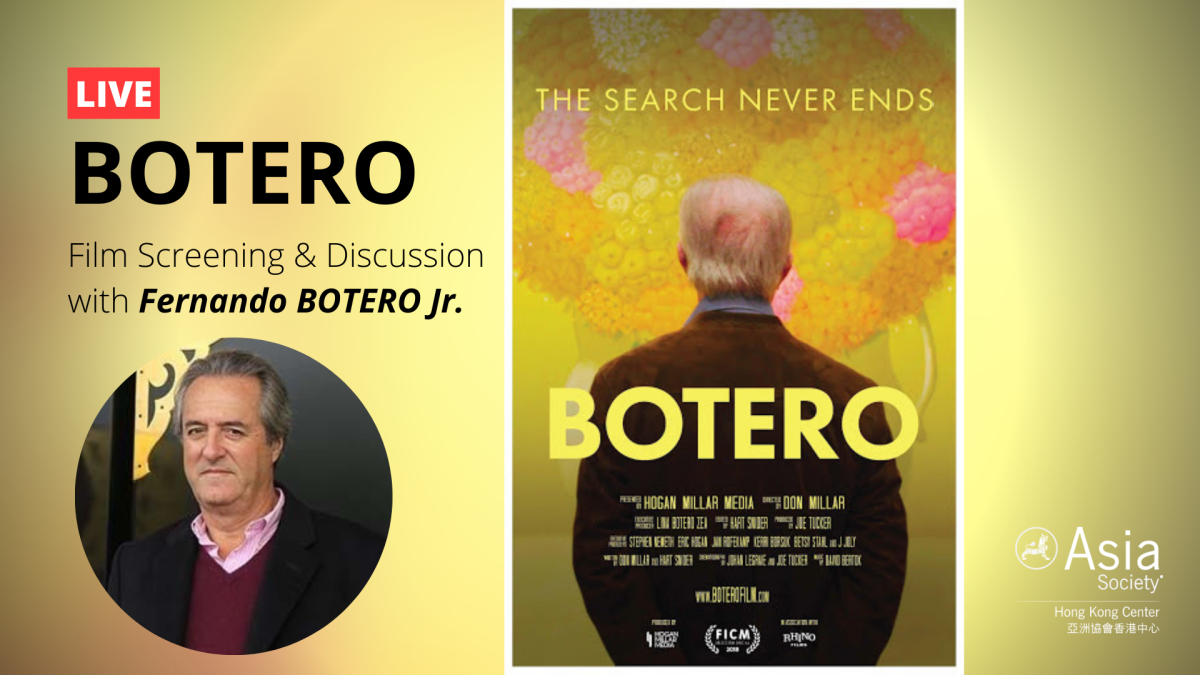 Register to Watch the Film Here

Once registered, a password protected link to watch the film online will be sent on Friday, September 25th and will be valid until Sunday September 27th for independent viewing.

Botero is a behind-the-scenes chronical of the life and art of Fernando Botero, Colombia’s greatest living artist, by filmmaker Don Millar.

Fernando Botero Zea (born of Colombian parents in Mexico City in 1956) is a Colombian-Mexican businessman, entrepreneur, Director of Botero in China, lecturer of The Landmark Forum and the eldest son of Master Fernando Botero. During his childhood he lived in Mexico, Colombia and the USA. He studied Political Science at the Université de la Sorbonne in Paris, Political Science and Economics at the Universidad de Los Andes of Colombia, an MBA at Harvard University and a Master in Public Administration in the Kennedy School of Government of Harvard University in Boston, USA. From 2008 he has collaborated in diverse projects that intend to bring Master Botero’s work to China and from 2015 he became co-director, alongside Juan Montana, of the Botero in China project which brought a large-scale retrospective of Master Botero’s work to the National Museum of China in Beijing, the China Art Museum of Shanghai and the Monumental Sculptures Exhibition to Hong Kong.

Henrietta Tsui-Leung (Class of 2004) pioneered and unified the Hong Kong art gallery scene, and established the Hong Kong Art Gallery Association in 2012 with a group of galleries. Henrietta has successfully launched the international careers of a number of Chinese artists, building major exhibition opportunities at international museums and art fairs. She has had a decisive impact on the evolution of ink, bringing artists of diverse vision, concept and media to new audiences. Henrietta obtained her undergraduate degrees in Psychology and Economics from Queens University, and an MBA from Kellogg-HKUST. In 2018, she completed her PhD degree in Art Theory and Criticism at China’s Academy for Art Industries, Shanghai University and is appointed as senior research specialist in China Art Economics Institute. Due to her unique background in business and art, she is regularly invited to speak as a thought leader and write academic papers on contemporary ink, the global art market, art as an investment, valuations, art licensing and art finance.

Peggy Yeoh Lee was formerly a senior lawyer in the area of mergers and acquisition at a renowned law firm in Sydney, Australia. Post her legal career, she became an executive director of a listed property funds management company and founder of a fashion retail company in Australia that carried brands such as DVF, Christian Louboutin, Tods and Vera Wang. Both businesses were subsequently sold before she decided to found the Little Dalton Kindergarten and the Dalton School Hong Kong, a not for profit child-centered dual language primary school in Hong Kong. She is heavily involved in education and arts charities. Peggy also invests in and funds various plays and musical productions in the Westend and is involved with early financing of tv productions. Peggy joined the Art Gallery of NSW Foundation in 2020 and is a member of the Sydney Project Campaign Committee. In addition, she is sits on the advisory board of the Peggy Guggenheim Museum and the inaugural advisory board for the Yale Emotional Intelligence China Center. She is also an active member of the Hong Kong Ballet Guild.