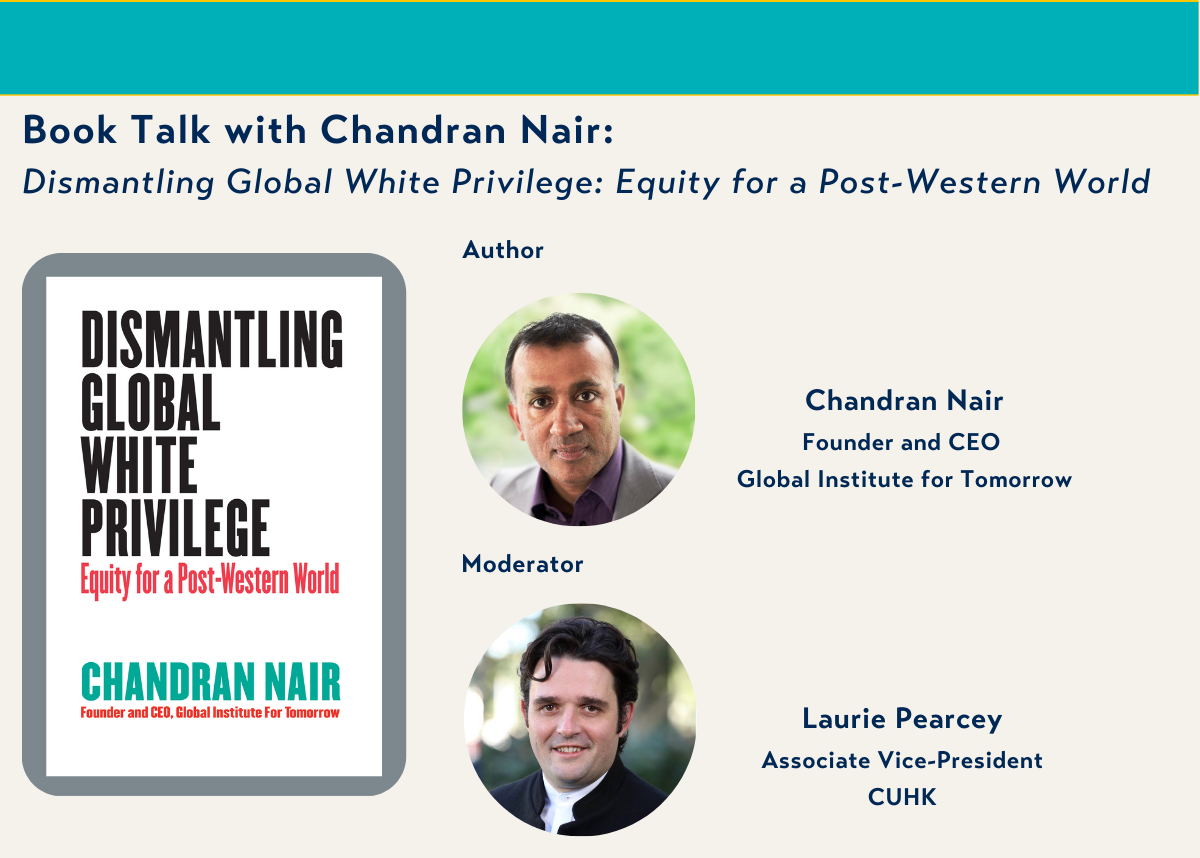 Please visit our page or contact us at membershiphk@asiasociety.org.hk
if you would like to know more about other membership types.

In his book Dismantling Global White Privilege: Equity for a Post-Western World, author Chandran Nair argues that a belief in the innate superiority of White people and Western culture is woven into the fabric of globalization, damaging and distorting societies around the world. In conversation with Laurie Pearcey, Associate Vice-President (External Engagement & Outreach) at the Chinese University of Hong Kong, Mr. Nair will discuss the key messages of his book and offer his vision for how individuals, organisations, and states can identify the power of White privilege and move beyond it, in order to build a more equitable world.

Chandran Nair is the founder and CEO of the Global Institute for Tomorrow, an independent pan-Asian think tank committed to understanding the dynamic relationship between business, society, and the state and reshaping the rules of global capitalism. He is a member of the executive committee of the Club of Rome and was former chairman of Environmental Resources Management for Asia Pacific. Nair is a regular speaker at global forums including the World Economic Forum, Asia-Pacific Economic Cooperation summits, and Organization for Economic Co-operation Development events.

About Dismantling Global White Privilege: Equity for a Post-Western World

White privilege damages and distorts societies around the world, not just in the United States. This book exposes its pervasive global reach and creates a new space for discourse on worldwide racial equality.

As Chandran Nair shows in this uncompromising new book, a belief in the innate superiority of White people and Western culture, once the driving force behind imperialism, is now woven into the very fabric of globalization. As Nair points out, many non-White people have internalized it, judging themselves by an alien standard.

Nair takes a comprehensive look at the destructive influence of global White privilege. He examines its impact on geopolitics, the reframing of world history, and international business practices. In the soft-power spheres of White privilege—entertainment, the news media, sports, and fashion—he offers example after example of how White cultural products remain the aspirational standard. Even environmentalism has been corrupted, dominated by a White savior mentality whereby technologies and practices built in the West will save the supposedly underdeveloped, poorly governed, and polluted non-Western world.

For all these areas, Nair gives specific suggestions for breaking the power of White privilege. It must be dismantled—not just because it is an injustice but also because we will be creating a post-Western world that has less conflict, is more united, and is better able to respond to the existential challenges facing all of us.

Purchase a copy of Dismantling Global White Privilege: Equity for a Post-Western World from our store.