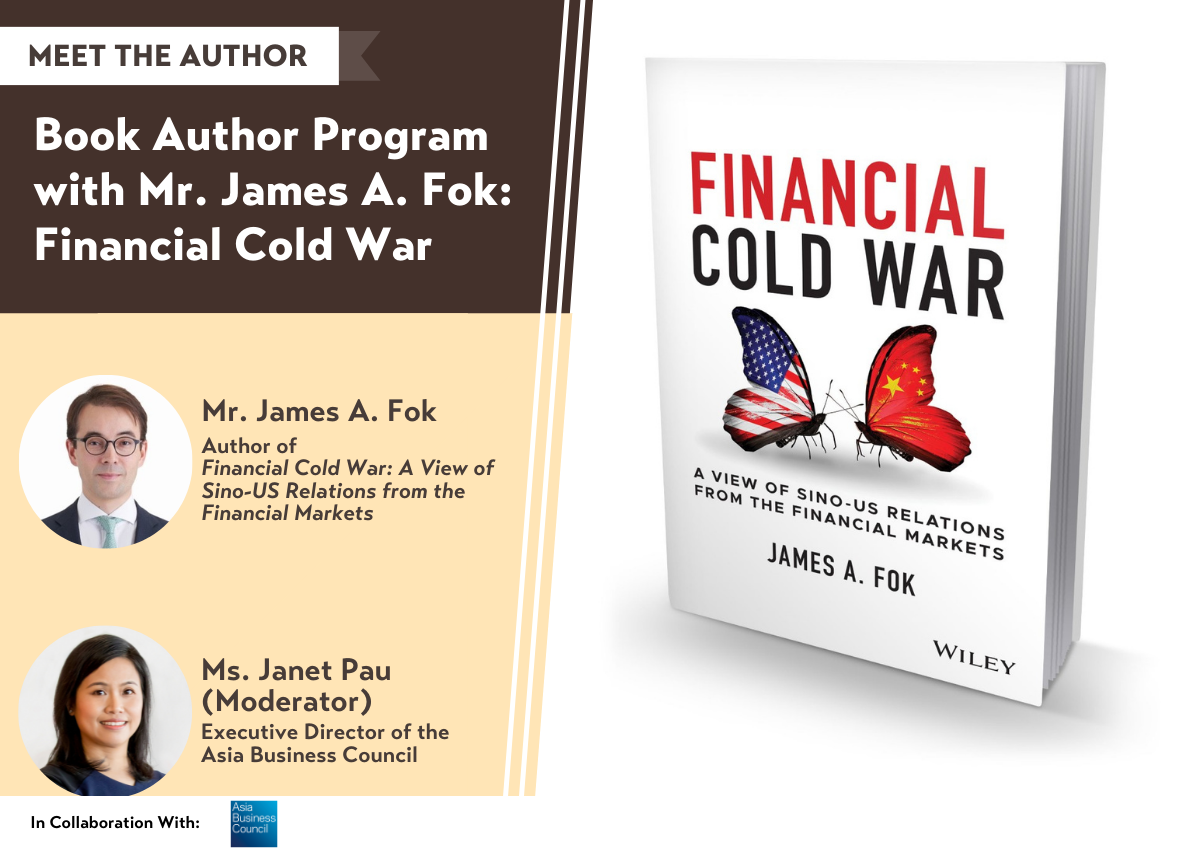 In the midst of financial and economic tensions, the term “New Cold War” emerged, as speculation of intensifying financial conflicts continue. Yet, James A. Fok, author of Financial Cold War, rejects the notion by injecting the definition of “New Cold War” and what defines “Financial Cold War”. The book provides background of the U.S. financial system, China’s economic policy and the nature of the current Sino-U.S. conflict. James A. Fok dissects the financial and economic factors that led to the current predicament, and analyzes the geopolitical realities underlying financial markets and solutions to balance varying interests, offering fascinating insights to policymakers in both the East and West.

Shop the book from our Asia Society Store:
https://shop.asiasociety.org.hk/collections/new/products/financial-cold…

James A. Fok is a veteran financial and strategic advisor to corporations and governments. He served as a senior executive at Hong Kong Exchanges and Clearing (HKEX) from 2012 until 2021, during a period of rapid internationalization in China's capital markets. While there, he played a major role in a number of landmark financial markets initiatives, including the launch of the Shanghai-Hong Kong Stock Connect programme (2014), Bond Connect (2017) and the Hong Kong market's Listing Reforms (2018). Prior to HKEX, Mr. Fok worked as an investment banker in both Europe and Asia, specializing in the financial services sector. Mr. Fok has written and spoken extensively about market structure issues and the intersection between geopolitics and international finance. He serves or has served on a number of financial industry bodies, including Ireland for Finance's Industry Advisory Committee (2021-), the Executive Board of the International Securities Services Association (2018-21), and the Financial Services Advisory Committee of the Hong Kong Trade and Development Council (2014-21). He is also a member of the Advisory Board of Hex Trust (2021-).

Janet Pau is the Executive Director of the Asia Business Council. Previously, she was the Director of The Economist Group’s Corporate Network in Hong Kong, the Program Director of the Asia Business Council, and Manager at the Global Business Policy Council at consulting firm Kearney in Washington D.C. Janet’s publications include Through the Eyes of Tiger Cubs: Views of Asia’s Next Generation and Building Energy Efficiency: Why Green Buildings are Key to Asia’s Future (Chinese edition). She has written and spoken extensively in her role at The Economist Group, published articles in the South China Morning Post and Fortune China, and written book chapters and spoken regularly on issues including trade and investment, economic competitiveness, inclusive growth, and technology and the future of work in Asia. Janet received a Bachelor of Arts degree in international studies and psychology with distinction from Yale University and a Master in Public Policy from Harvard University (Moderator).

Since the 2008 global financial crisis, tensions between the United States and China have risen rapidly. The rhetoric escalated further when the Trump Administration imposed significant new tariffs on Chinese goods and, despite a transition to a new administration in the White House, a near-term thawing of relations does not appear to be in the cards.

In Financial Cold War: A View of Sino-US Relations from the Financial Markets, market structure and geopolitical finance expert James Fok examines Sino-US relations through the lens of the financial markets, helping readers understand how imbalances and nuances in the structure of the global financial system have contributed to the current geopolitical tensions between America and China.

The book traces the history of the development of financial markets in both countries and of the current US dollar-based global financial system. It goes on to explain why the structure of world financial markets is fanning the flames of global tensions. Alongside a presentation of geopolitical developments between China and the West from the 18th century to the present day, the author examines the role of technology, innovation, regulation, taxation, and politics in markets. At the same time, he explores how the markets have impacted politics and policy.

Drawing on over two decades of hands-on experience in financial markets, including a decade on the frontline negotiating the integration of Mainland Chinese and international capital markets, Fok offers an in-depth analysis of the global financial system and questions the enduring assumptions that underpin it. He highlights the growing risks of dependence on the US dollar and worldwide fiscal competition, the challenges posed by China’s gradual financial market opening, and the role played by Hong Kong as an intermediary for capital flows between China and the rest of the world. He also suggests ways for Chinese and American policymakers to address key financial sources of conflict in order to de-escalate geopolitical tensions.