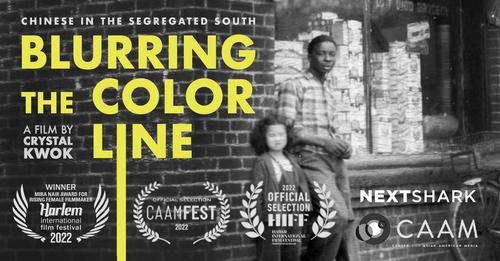 *Dialogue in English, with Chinese subtitles

What did it mean to be Chinese in Black space during segregation? Following director Crystal Kwok's personal journey of discovery, she digs into how her grandmother's family navigated life as grocery store owners in the black neighborhood of Augusta, Georgia. The film weaves personal family stories with memories from the larger Chinese and Black communities, opening up uncomfortable but necessary conversations around anti-black racism and the deeply rooted structure of white power and Chinese patriarchy that contributed to this. Which fountain did the Chinese drink from? Where did they sit on the bus? An entrance into our connected histories we never knew or dared speak about as told through the woman's lens.

Blurring The Color Line - Trailer from Crystal Kwok on Vimeo.

After the screening, Dr Stacilee Ford, Affiliate Associate Professor (Faculty of Arts) of the University of Hong Kong will join the director, Crystal Kwok to conduct a post-screening talk and Q&A session.

Crystal Kwok is an award-winning filmmaker who established her career in Hong Kong as an actress, writer, director, and talk show host. She won the audience choice awards at the 2000 Deauville Asian Film Festival for her debut feature length film, The Mistress. She was commissioned by Canal Plus to document A Day in the Life of Jackie Chan as part of the centennial celebration of international directors, She created and produced a bilingual edutainment video series for young children, The Culture Cubs and wrote and has staged several original plays about sensitive women’s issues. As a strong women’s advocate, her talk show, Kwoktalk broke boundaries in Hong Kong with conversations about women and sexuality. Having moved back to American soil after being overseas for a couple of decades, Kwok now embraces issues closer to home – that of her Asian-American heritage. Kwok is currently a PhD candidate at the University of Hawaii in Performance Studies and a recipient of the prestigious East-West Center Scholar awards. She also hosts a radio talk show and podcast, Kwoktalk on KTUH 90.1 FM, addressing racial and gender issues with a multicultural perspective.