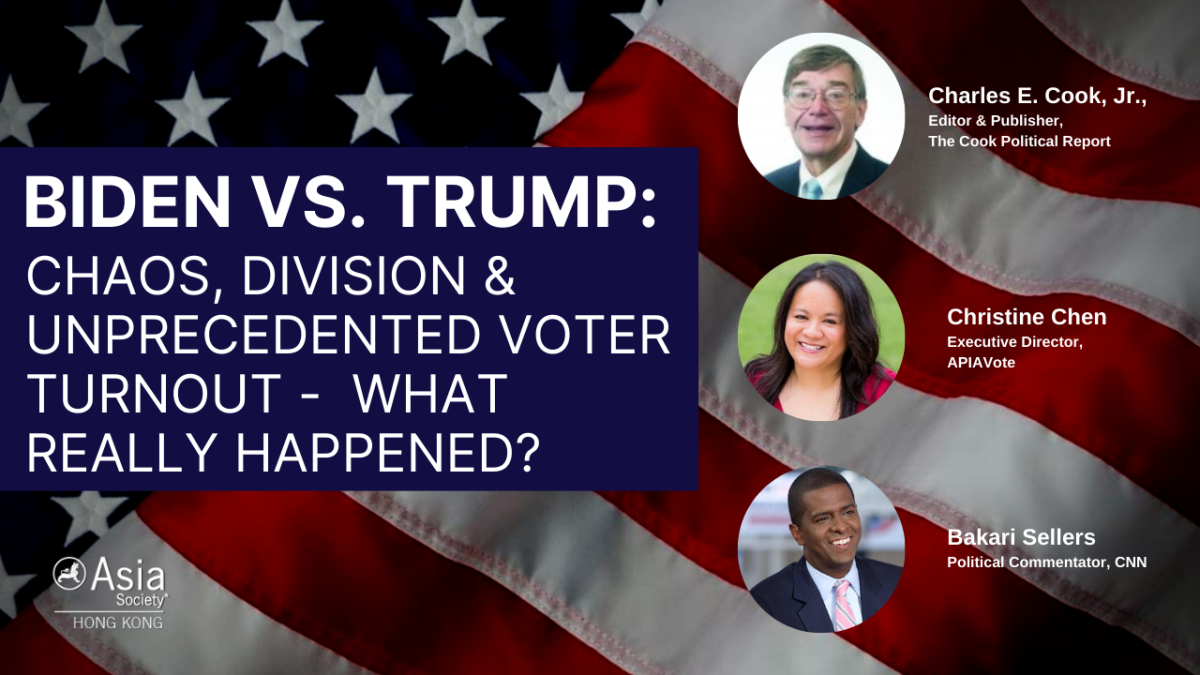 On Wednesday December 23, Asia Society Hong Kong Center will air a live webcast discussion to break down, analyze and reflect on the results of the 2020 United States Election. The choice for President that saw an unprecedented voter turnout where Joe Biden has been announced as the apparent President-Elect despite President Trump still refusing to concede the election is noteworthy. What's more is that Joe Biden has easily received the most votes ever by any presidential candidate in American history with over 80 million votes and counting (the previous record belonged to President Obama in 2008 with 69 million ballots cast), yet Donald Trump also gained 10 million more voters than he did in 2016 to end up with over 73 million votes himself.

Another talking point from the election is the fallout over why the Democrats underperformed so badly in the House races and even within the party itself, internal finger pointing between progressives and centrists has already ensued. Finally, the control of the United States Senate is still anybody's guess and will rest on the results of Georgia's two run-off Senate elections on January 5th of next year. What are we to make of all this political uncertainty in America and what should we expect going forward?

With Charlie Cook, Editor and Publisher of The Cook Political Report and veteran of U.S. election analyses; Christine Chen, founding Executive Director of APIAVote; and Bakari Sellers, who was the youngest African American elected official; we have convened an impressive panel that ensures a balanced discussion featuring a diversity of perspectives that reflect the evolving face of the American electorate. S. Alice Mong, Executive Director of ASHK, will moderate this important and timely discussion.

Charles E. Cook, Jr., Editor and Publisher, The Cook Political Report
Charlie Cook is the editor and publisher of The Cook Political Report, and a political analyst for the National Journal Group. He founded the independent, non-partisan The Cook Political Report in 1984, described by The New York Times as “a newsletter that both parties regard as authoritative,” while CBS News’ Bob Schieffer called it “the bible of the political community.” Mr. Cook is also the co-author of the 2020 Almanac of American Politics, a biannual book widely considered to be the definitive publication analyzing U.S. elections, every state and every Congressional district in the country. Over the years Mr. Cook has served as an election night analyst for CBS, CNN and NBC, and since 1996 on NBC News Election Night Decision Desk in New York. In 2010, he was the co-recipient of the American Political Science Association’s prestigious Carey McWilliams award to honor “a major journalistic contribution to our understanding of politics.” In 2013, Mr. Cook served as a Resident Fellow at the Institute of Politics at Harvard’s Kennedy School of Government.

Christine Chen is the founding executive director (2006-2008) and current Executive Director (January 2011-present) of APIAVote. Through research and polling of Asian American voters, APIAVote’s regional trainings and field programs have strengthened the local grassroots programs in reaching and mobilizing Asian American and Pacific Islander voters. More recently, APIAVote has launched extensive initiatives to have a full and complete count of the Asian and Pacific Islander community in the 2020 Census. Through all these efforts, APIAVote has played a key role in elevating the Asian American and Pacific Islander electorate to an unprecedented national level in recent years. Chen is well-known by activists across the county. Her track record in building coalitions and working at the grassroots and national levels established her as one of the strongest voices in the APIA community. She has more than 25 years of experience in organizing and advocating on issues such as immigration, hate crimes, affirmative action, census, racial profiling, voting rights, election reform, and fighting against derogatory and racist media incidents. Profiled by Newsweek magazine in 2001 as one of 15 women who will shape America’s new century, Chen served from 2001 to 2005 as national executive director of the Organization of Chinese Americans (OCA), one of the leading APIA civil rights organizations in the country.  Chen currently serves on the Steering Committee for National Voter Registration Day, Kennedy Center Community Advisory Board and the board for the Center for Asian American Media.

Bakari Sellers was born into an activist family. His father, civil rights leader Cleveland Sellers, instilled core values in him to continue in the tireless commitment to service. In 2005 Bakari earned a bachelor's degree in African-American Studies from Morehouse College. He continued his education at the University of South Carolina School of Law in 2008 earning a juris doctor.

Bakari currently practices law with the Strom Law Firm, LLC in Columbia, SC where he heads the firm’s Strategic Communication and Public Affairs team and has recently added Diversity, Equity and Inclusion Consulting to the list of services offered. Bakari made history in the 2006 South Carolina state legislature as the youngest African American elected official in the nation, at the age of 22. His political career did not stop there, in 2014 he was the Democratic Nominee for Lt. Governor in the state of South Carolina. Bakari has also worked for United

States Congressman James Clyburn and former Atlanta Mayor Shirley Franklin. His accomplishments do not go unnoticed within the Democratic Party. In 2008 he served on President Obama’s South Carolina steering committee. His ability to “reach across the aisle to get things done” hasled to numerous achievements including being named TIME Magazine’s 40 Under 40 and “The Root 100”

list of the nation’s most influential African-Americans in 2015, and HBCU Top 30 Under 30 in July 2014. Bakari has served as a featured speaker at various Political Events, Universities, and National Trade Organizations across the country, such as the 2008 and 2016 Democratic National Convention. He recently released a New York Times Best Seller My Vanishing Country: A Memoir. The book has been described as part memoir, part historical and cultural analysis illustrating the lives of America’s forgotten black working-class men and women. Bakari also recently expanded his audience with the Bakari Sellers Podcast, a twice-a-week show that is part of The Ringer Podcast Network. His podcasts discuss a variety of topics from politics, race, sports, media, the presidential campaign, and much more. He is married to his wife Dr. Ellen Rucker-Sellers and father to twins Sadie and Stokely.