An Apprenticeship Model from Switzerland 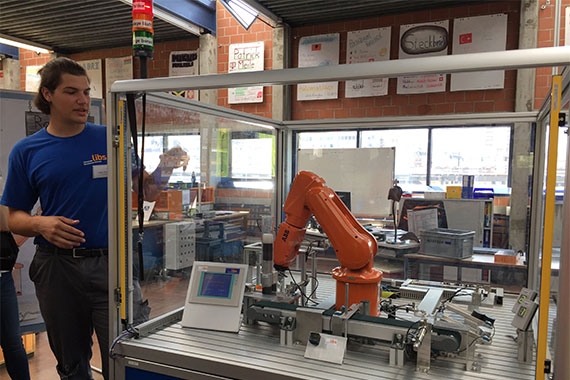 If you are a 15-year-old beginning high school, which country would you rather belong to?

I don't know about you, but I would choose country B. You probably guessed that country A is America. Country B is Switzerland, where the secondary education system is heavily focused on career and technical education (CTE) with a high-quality apprenticeship model. Many students spend one or two days at school and the rest of their week applying what they learn in the workplace. This allows a healthy transition into working life—as evidenced by their low unemployment rates.

Today the U.S. Department of Labor will sign a declaration of intent with Switzerland to establish an apprenticeship program based on their model. The Swiss model engages students at 15 or 16 years of age, prepares them with 21st century skills for high-demand, high-skilled jobs, and allows them to pursue higher education (including university degrees) and training.

Commonly, Americans tend to view CTE and apprenticeships as being created for the lowest level of student who trains for a trade and then ends their schooling. In Switzerland, the goal of the apprenticeship system is to provide quality education and create productive, lifelong learners across society. Approximately 70 percent of Swiss students chose to do an apprenticeship, and only 25 percent choose a traditional university pathway.

Curdin Duschletta, Managing Director, Head of Community Affairs Switzerland, UBS and a former apprentice, says that countries should not look to the Swiss model to lower their youth unemployment rate and get "kids of the streets." Instead, the model builds up the next generation and creates innovators.

Arthur W. Glättli, Managing Director of Swissmem Vocational Education and Training, a professional association of manufacturers, agrees that the goal is not to bring up the bottom percentage of students; however, for those in a lower socio-economic status, it provides a safe route to "not fall off the cliff" and still have many opportunities to advance. The key is that apprenticeships are part of flexible pathways that acknowledge and build on skills and allow for either more training or higher education.

A key point to understand is that students are not locked into the occupational area they chose. Apprenticeships are a way to engage students in learning while giving them the opportunity to explore possibilities. Many Swiss apprentices will mention that they chose this route because it was shorter and they were tired of school at age 15. However, after completing the apprenticeship and working for a year or two, they were inspired to return for higher education and training. Research supports that occupational mobility is quite high: workers are able to switch jobs within their cluster areas as skills demands shift and to make more money as they do so. Research also shows that all things being equal, Swiss students who go through a mixed academic and vocational education pathway make more money than those who go through a purely academic or purely vocational one.

The U.S. Ambassador to Switzerland, Suzie LeVine, a proponent of apprenticeships, told us, "Apprenticeships are the ideal vehicle to teach 21st century skills." This is because students are applying what they learn in real-world situations requiring communication, problem-solving, and teamwork skills.

The Swiss took a very direct approach to this, revamping their entire VET (vocational education and training) curriculum to a competence- and project-based learning approach in 2004. This was a major undertaking, yet they felt it was necessary in order to modernize the industries and include "soft" (21st century) skills for every vocation. High expectations are set for all students, no matter their job. All stakeholders were involved in the process of creating these skills frameworks, including the teacher trainers, businesses, government, and educators.

These skills are also promoted outside of the formal curriculum. Training programs, such as those for manufacturing and banking students, include week-long team building exercises. In 8th grade, all students must spend at least two days job shadowing at different companies—visits that they must arrange completely on their own.

If you meet an apprentice in Switzerland you will immediately see the results of this education: they flawlessly present their work to you in English, which is a third or fourth language for most of them and not an official language of Switzerland. They will tell you how they solve customers' problems or deal with difficult ones. They work in teams to create project plans to build new products.

Partnerships between Employers and Education

One of the most striking things about the Swiss model is the heavy involvement of employers. Rather than viewing this as a corporate social responsibility, businesses lead the effort to develop future talent. The employers know that if they don't help train the workforce, they will be caught in a cycle of training them much later in life when it is more expensive or spending considerable money to poach workers from others while also managing low worker engagement. Training young Swiss workers has been shown to have positive returns on investment for businesses.

The Swiss have set up the right structures for governance, which bring all sectors together: higher education, industry, and government (state and federal). So can it be done in the United States? Could we align our system to do this? And, more importantly, can we respect what young people bring to the table and give them real work to do? Early models say yes.

Houston, Texas is facing a huge skills gap. Therefore, Houston Independent School District, where all students must choose a diploma endorsement, which is similar to a college major, is emphasizing 21st century skills and work-based learning. Their recently released a 21st Century Graduate Profile, which frames their vision as a district, was created through a process that involved all community stakeholders including industry. Similarly in Denver, industry advisory boards are heavily invested in new internship programs.

In Kentucky, the TRACK program, a partnership between the KY Labor Cabinet and the Office of CTE, currently enrolls high school students across the state in apprenticeships. Students apply to the company they are interested in through an intermediary that handles the human resources (HR) management of the program. While working, students earn a wage, an industry certification in addition to a portable national certification, and upon completion, the option to continue in a Registered Apprenticeship program.

And, in San Antonio, the Alamo Academies program is a slightly different, two-year, dual credit, career academy model. Students attend classes at their school as well as Alamo Colleges, allowing them to earn both a high school diploma and an industry certification. During the summer, they serve as paid interns at over 100 regional companies focused in high-wage demand industries like aerospace, advanced manufacturing, IT, health, and energy. More than 1,000 young people have completed the program since it began in 2001.

Another summer internship model is that of the Boston Private Industry Council, which engages approximately 900 businesses of all sizes in hiring high school students. In fact, in collaboration with the mayor's office, Boston places and pays 9,000 high school student in public and private jobs—one of the largest and longest enduring programs in the US.

What we have seen in Switzerland are young people who are engaged in their secondary school experience (95 percent complete their apprenticeship program). They are respected, work hard, and are prepared for lifelong work and learning. Don't we owe it to our youth to give them the same opportunities?

This article was written by Heather Singmaster, Asia Society, and originally appeared on the Global Learning blog on Education Week.