The Legacy of Angkor | Asia Society Skip to main content

The Legacy of Angkor 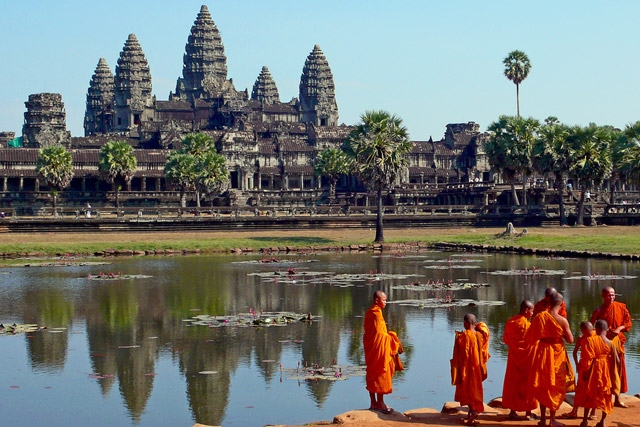 Images of the twelfth century temple known today as Angkor Wat have appeared on every Cambodian flag since the country gained its independence from France in l953. Cambodia is the only nation in the world to depict a ruin on its flag and “Angkor” is a crucial component of Cambodia’s identity.

Between the tenth and fourteenth centuries, the kingdom that we call Angkor dominated much of mainland Southeast Asia. Its capital at Yasopdharapura, north of Cambodia’s Great Lake, held over a million people, making it one of the most populous cities in the world. Its riches came from controlling manpower and natural resources for hundreds of miles in each direction and from trade with prosperous kingdoms elsewhere in Asia.

Because its houses and most of its buildings were made of wood, thatch and bamboo, they have disappeared without a trace. What we know about Yasodharapura, which was abandoned in the sixteenth century, comes from what remains of its walls, reservoirs, roads and above all, its religious buildings, which were built of stone and laterite to honor the Buddha or a pantheon of Indian gods. Angkor Wat, built in the early twelfth century, served as a monument to a powerful king, Suryavarman II, and also as his tomb, The temple, dedicated to Vishnu, covers over a square mile. Its beautifully carved bas relieves depict scenes from the Indian epic, the Ramayana and from Suryavarman’s life. They also display the god of the underworld, Yama, sending people to heaven or to hell.

“Angkor” was a complex civilization with its kings at the apex of society. Most of the people who built the temples and grew food for the elite were rice farmers, using techniques that have endured with little alteration until the present day. The Khmer were also skillful builders and talented artists in stone and wood. Khmer engineers designed impressive reservoirs and arrow-straight roads connecting Cambodian cities, and Khmer poets composed the elaborate inscriptions that survive at many of the temples. Cambodian warriors attacked neighboring kingdoms and defended Yasodharapura against invaders. Many of these “everyday” contributions are forgotten when we visit the temples, or when we view Cambodia’s ethereal classical dance. If we look at the way that Cambodian farmers near the ruins live their lives; however, we can get some idea of the lives of ordinary Khmer, a thousand years ago.

In the late twelfth and early thirteenth centuries, a powerful king, Jayavarman VII (r. 1180-1220) rebuilt the walls of Yasopdharapura and placed his temple mountain, the Bayon at the center of the redesigned city. Bas-reliefs on the temple depict battles with the neighboring kingdom of Champa, and vivid scenes of twelfth century Cambodian life. Jayavarman was a pious Buddhist, and larger than life size portrait statues of him have been found at several sites. He was also the last king at Angkor to patronize the construction of stone temples dedicated to the Buddha and to Hindu gods. In the thirteenth century, most Cambodians converted to Theravada Buddhism, the somewhat austere variant followed by the Khmer people today.

Yasodharapura remained a grand and prosperous city for at least two hundred years after Jayavarman’s death. It was partially abandoned in 1431 following an invasion by Thai armies. Soon afterwards, Cambodia’s capital shifted to the south. In the 1500s a Cambodian king visited the old city, restored some temples and probably installed himself in Yasodharapura for a time. Pilgrims often visited Angkor Wat and there was a Buddhist monastery for centuries beside the temple, but Yasodharapura was forgotten by the outside world and the forest slowly reclaimed it.

In the l860s France established a protectorate over Cambodia, and ruled benignly for ninety years. The French were thrilled to “ discover” Yasodharapura, and brought the ruins to the attention of the world. French scholars also deciphered the inscriptions, dated the temples and rediscovered the names and sequence of forgotten Angkorean kings. The French also restored the temples, and built roads that made them accessible to tourists.

Under King Norodom Sihanouk, Cambodia gained its independence in l953. For seventeen years, Cambodia was at peace, and French archaeologists, aided by Khmer, continued their work at Yasodharapura. The civil war of l970-1975 and the ruinous Khmer Rouge era that followed meant that no work was done at Angkor. Serious restorations resumed in the late l980s. Today, missions from France, Italy, Japan and other countries are busy at Angkor, which has become a popular tourist site, visited each year by several hundred thousand people.

Its “legacy” consists of the extraordinary artistic and engineering talents that the ruins reveal. These talents are on view today in Cambodian classical dance and among the openhearted, inventive and resilient people who struggle to make ends meet in their poor, overcrowded country, while bearing witness to their wondrous past.