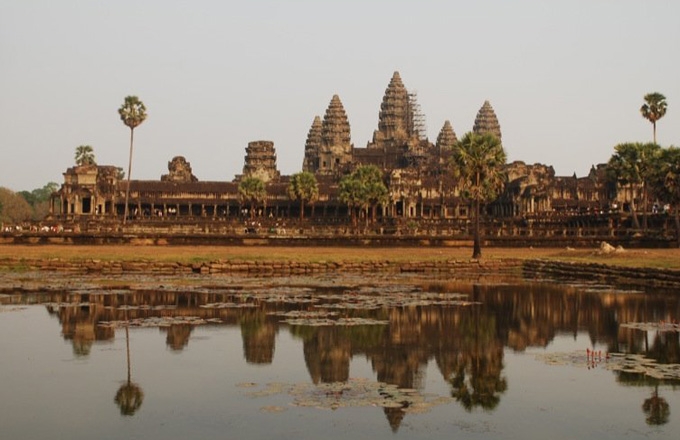 Cambodia's history is marked with periods of peace and of great calamity. From its early cities to the introduction of Hinduism and Buddhism, the great kingdom of Angkor, colonialism, and the Khmer Rouge, this essay tries to put its current rebuilding of civil society in context of its incredible history and the challenges it faces today.

When Communist insurgents known as the Khmer Rouge seized control of Cambodia in 1975, a spokesman claimed that in the process "2,000 years of history" had come to an end. What he meant was that the Khmer Rouge intended to break with the past and to overthrow Cambodia’s social relationships. The spokesman was also boasting that Cambodia's recorded history stretched back for two millennia.

In fact, archaeological data has revealed that the area we now call "Cambodia" was inhabited by human beings at least 40,000 years ago. Cities developed along the coast in the centuries before and after the birth of Christ. Indian and Chinese pilgrims and traders passed through these cities, and for the first centuries of the Christian era sources for Cambodian history that survive are almost entirely written in Chinese. Elements of Indian culture, in the meantime, took root among Cambodia’s elite, and by the 5th and 6th centuries several Hinduized kingdoms sprang up in southern Cambodia. We know about them from the remains of small religious monuments in brick, laterite and stone, from massive stone sculptures, and from inscriptions in Sanskrit and Cambodian, or Khmer. The earliest dated inscription comes from the 4th century CE.

In the late 8th century, a Khmer prince later crowned as Jayavarman II returned to Cambodia from "exile" in Java, and began to consolidate the kingdom. In 802, in a ceremony near the site we now call Angkor, north of Cambodia's Great Lake, he declared himself a universal monarch, and founded a dynasty that lasted until Angkor was abandoned in the 16th century.

In its heyday, Angkor was a powerful kingdom that dominated much of mainland Southeast Asia. Its capital, Yasodharapura, probably housed as many as a million people—most of them farmers—making it one of the most populous cities in the world. The city's temples, dedicated to the Buddha or to Hindu gods, are among the artistic wonders of the world. An image of the most famous of these, Angkor Wat, has appeared on every Cambodian flag (there have been five of them) since the country gained its independence from France in 1953.

In the 13th century, Cambodians converted en masse to Theravada Buddhism, the variant practiced by the Khmer today. State-sponsored Hinduism, and the temples inspired by that religion, lost their importance, but for many years the kingdom remained strong and prosperous, as the Chinese emissary Zhou da guan reported in 1296. Over the next 200 years, the empire shrank, as tributary states in what is now Thailand declared their independence and invaded Cambodian territory. By 1450 or so, the capital had shifted southward to the region of present-day Phnom Penh, where it has remained ever since.

Over the next four centuries, Cambodia became a small Buddhist kingdom dependent on the goodwill of its neighbors, Thailand and Vietnam, In the mid-19th century, conflict between these kingdoms spilled onto Cambodian soil, and Cambodia almost disappeared.

In 1863 the Cambodian king, fearful of Thai intentions, asked France to provide protection for his kingdom. France kept Cambodia from being swallowed up, but the protectorate developed into a full-scale colonial relationship that the king had not foreseen.

French rule lasted until the 1950s, and was less harsh than in neighboring Vietnam. The Khmer elite was treated well and French policies had a relatively light impact on the population, while improvements in infrastructure strengthened the economy and brought Cambodia to the edges of the developed world. France's greatest contribution to Cambodia was probably its restoration of the temples at Yasodharapura. French scholars deciphered Angkorean inscriptions and rebuilt many of the temples, providing Cambodians with a glorious, precisely dated past that had been largely forgotten.

After Cambodia gained its independence from France, it entered a short period of peace and prosperity which many older Khmer now look back on as a golden age. By the late 1960s, however, Cambodia was drawn inexorably into the Vietnam War. In 1975, Communist forces, known to the outside world as Khmer Rouge or Red Khmers, overthrew the pro-American regime that had seized power five years before. In the Khmer Rouge era that followed , at least 1.2 million Cambodians died of malnutrition, overwork, executions, and mistreated diseases as the Maoist-inspired regime sought to achieve total communism overnight. Responding to Cambodian attacks, Vietnam invaded Cambodia in 1979 and established a protectorate there that lasted for 10 years.

Under peace agreements signed in Paris in 1991, Cambodia came under United Nations protection for a time in preparation for general elections that were held in 1993. Since then, Cambodia has been a constitutional monarchy ruled by a coalition government that has accepted large infusions of foreign aid. In 1999 Cambodia became a member of ASEAN, and became for the first time, after centuries of isolation, a full-fledged member of the Southeast Asian community.