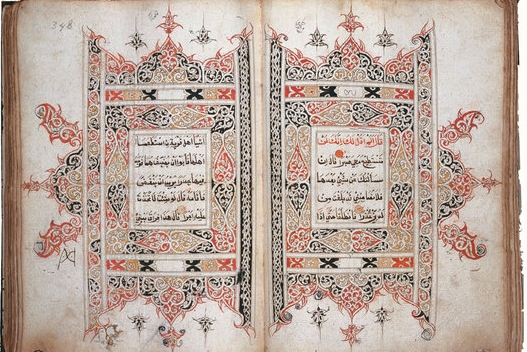 The Arabic script contains a full range of letters of manipulable size and shape, making it fertile ground for calligraphic ornamentation. Islamic artistic traditions depend heavily on the use of geometric, floral and textual patterns because the Prophet Muhammad warned against idol worship. This is understood as a prohibition of using animal and human forms in texts, textiles and architecture. Islamic calligraphy and illustrated manuscripts have been highly prized for millennia.

The Qur'an, God's word as revealed to the Prophet Muhammad, was transmitted in the Arabic language. Initially, the Qur'an was passed orally by huffaz--those who memorized and recited the contents of the Qur'an by heart. However, the caliph Abu Bakr initiated the creation of manuscripts of the Qur'an in the seventh century. It was not long before aesthetic considerations came to the fore. The Arabic script contains a full range of letters of manipulable size and shape, making it fertile ground for calligraphic ornamentation. As Anthony Welch has stated,

Written from right to left, the Arabic script at its best can be a flowing continuum of ascending verticals, descending curves, and temperate horizontals, achieving a measured balance between static perfection of individual form and paced and rhythmic movement. There is great variability in form: words and letters can be compacted to a dense knot or drawn out to great length; they can be angular or curving; they can be small or large. The range of possibilities is almost infinite, and the scribes of Islam labored with passion to unfold the promise of the script.[1]

The calligraphic tradition, initially growing out of the demand for illuminated Qur'ans, was later used to embellish both religious and secular art in the Islamic world, and often appeared in books alongside (or integrated into) paintings. Calligraphy and manuscript decoration became important court art traditions in different parts of the Islamic world.

Some of the earliest examples of calligraphic masterpieces came from Baghdad, during the Abbasid dynasty (758-1258.) These pieces show a marked Byzantine influence. Persian calligraphy under Turkish dynasties demonstrates both Turkish and Persian influence. However, the tradition of illustration under Mongol rule was to become an extraordinary and unprecedented amalgam of existing styles fused with modified and recreated East Asian motifs. This synergy of techniques and influences would lead the tradition of Mongol calligraphic book painting to new heights of sophistication and achievement. Centuries later, the sixteenth-century Safavid dynasty under Shah Tahmasp would also give the illustrated book the pride of place during an era of tremendous art patronage and output.

1 Welch, Anthony. Calligraphy in the Arts of the Muslim World. University of Texas Press, 1979.