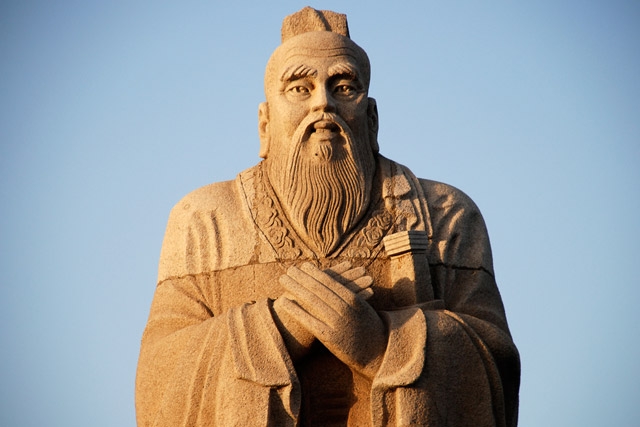 Confucius lived in China during the latter half of the Zhou dynasty (eleventh century–256 BCE). As a philosopher and teacher, Master Kong influences far more people today through classic writings, such as the Analects (Lunyu), than he did during his lifetime. He created a philosophy that later became a major influence in the organization of Imperial Age China and was adopted and modified in other countries such as Korea, Japan, and Vietnam.

Confucius emphasized principles for self-guidance. The key to producing a harmonious life, he wrote, is in how we treat others–our ancestors, leaders, parents, spouses, neighbors, and friends. The foundation for harmonious relationships is found in the principles of ren (benevolence), li (ritual/ceremony, often rendered as propriety/politeness), shu (reciprocity–“Do unto others . . .”), and xiao (filial piety–showing respect for one’s elders).

Two other concepts that were predominant in Confucius’s worldview were Tian (Heaven) and Dao (Way). His heaven represented a celestial power connected with the will of mighty ancestors, such as the widely known Yao, Shun, and Yü. The Way, on the other hand, constituted a natural path for humanity. Whereas Heaven emphasized choice, the Way required a yielding heart-mind (xin); both were crucial for achieving harmony in the earthly realm.