2014 was a year of successes in the Australia-China relationship. What's next? 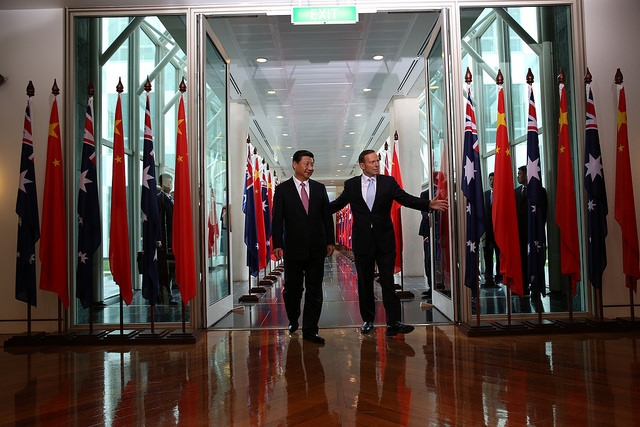 It has been over three months since President Xi Jinping visited Australia. A western, and now Chinese new year, has been and gone. Where do Australia-China relations stand now after a watershed year marked by the conclusion of the Free Trade Agreement negotiations and respective and substantive bilateral visits by Australian and Chinese leaders? And what are the prospects in the coming year when we move from laying the foundations of our political and economic engagement – Strategic Partnership and FTA respectively – to building and expanding the areas of the relationship where our interests align and benefits are mutual.

Xi certainly made a big effort when he came here to make Australia feel like it mattered to China. The visual symbolism of the visit (which does matter in state-to-state interactions) was that of ‘Big China’ and its grand arrival to the world stage. It was most noticeably manifested in the size of Xi’s entourage – Foreign and Commerce Ministers and the Foreign Affairs Councilor, eight provincial governors and a few dozens of CEOs of China’s leading enterprises. Xi pushed ahead with the visit to the last Australian state he had not previously visited – Tasmania – one of the few foreign leaders who can make such a claim.

More importantly, it was what he said in Australia that mattered. For the parliamentarians on the 17th November he talked about both countries aspiring to have a more imaginative, visionary relationship. Addressing the Australian Premiers and Chinese governors he spoke about the economic potential of China’s less developed regions and Australia’s remarkable capabilities in energy and services.

Many might be cynical about the long term impact of such high level visits. Was Xi’s really epoch making? That partly depends on just how well it has captured the change in tempo of relations between the two countries. Are we really seeing an historic water change, where increasingly our relationship with China will matter more than any other? Or will this be a temporary blip before the default of simply maintaining the relationship no matter what returns?

What happens next depends to a great extent on our national response to these questions. Xi’s visit, as the conclusion of the trade agreement negotiations, once again raised some complicated questions about where Australia’s future economic and strategic interests are likely to lie – the questions that we are likely to continue to try very hard to avoid answering. These questions are far more complex than the current extreme dimensions of our national debate – dominated largely by the three factions – US versus China choice, China as a savior and China as a kingdom of darkness (or a fascist state as in one of the most recent commentary).

We can and should do better than this. It is clear that we will engage and disagree simultaneously with our strategic ally and our largest trading partner on a variety of issues and with varying degree of success or damage. We will most definitely disagree more with China. But if the narrative for the US-Australia relationship is well-defined, all-inclusive and often creative, the sketch of the Australia-China story is often blurry and inconclusive. Optimistic and transactional pragmatism with which we often define our relationship with China is fine, but there will be times when we will be faced with the tough issues of commitment and influence, which we won’t be able to resolve through politico-economic deal-making. The Australia-China relationship now requires much more than maintenance and transactional approach.

What we need is a compelling, candid and imaginative story about our engagement with China. The story that identifies – with the same level of clarity, and dare we say, honesty – our common interests and areas of cooperation and opportunity, and our disagreements and sensitivities. Australia needs to identify areas where it has to think of the bilateral relationship in a way it might never have before – be it in security and diplomacy, trade and investment, society and migration, education and the arts. We will then need to make long-term political and financial investment (with bipartisan support) into engagement programs and initiatives that build on our common interests, reduce the risks of misunderstanding and mishandling and expand and inform the domestic constituency of the Australia-China relationship. Australia’s political leaders need to be at the forefront of drafting the new Australia-China story, leading public opinion rather than trying to maintain status quo. But they won’t be the sole authors. As it has done many times in the past, Australia will need to be creative and entrepreneurial in its diplomacy with China and on China with our other global partners. The dynamics of the region are changing, and Australia needs to have a flexible, dynamic, open minded and pragmatic response to this. Our business, education and artistic communities will need to play a more pro-active role in building the new narrative and get behind its multiple storylines – both intellectually and financially. And the crafting of this new story needs to start immediately, not in the few years, or even next year. It has to start now. Otherwise successes of 2014 will have been yet another lost opportunity in Australia-China relations.