as leading cultural ambassador for Australia 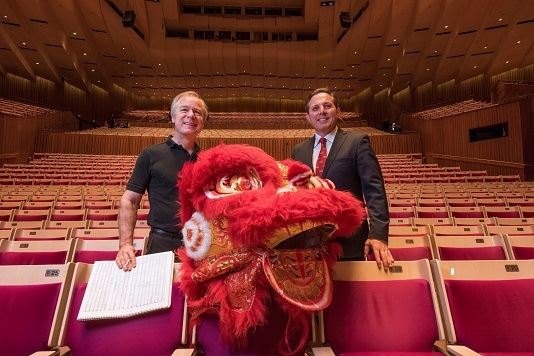 The Sydney Symphony Orchestra has been honoured for five decades of building and strengthening cultural ties between Australia and Asia.

The award was handed out by Asia Society Australia Deputy Chair, Alexandra Holcomb and received by David Robertson, the SSO’s Chief Conductor and Artistic Director, on the eve of the orchestra’s fifth tour of China in September. The SSO’s first overseas tour in 1965 included concerts in Manila, Tokyo and Hong Kong.

“Cultural diplomacy strengthens, broadens and deepens relations between the nations of the world. For five decades, the Sydney Symphony Orchestra has led the way in enhancing understanding of Australia and promoting the nation’s cultural achievements throughout the region. Asia Society Australia commends the SSO’s ongoing commitment as a leading cultural ambassador for Australia.”

“We at the Sydney Symphony Orchestra are incredibly honoured to accept this award. As we prepare for our fifth tour to China next month, we are grateful to the Asia Society for helping organisations like the SSO share our music with our nearest neighbours. We thank you for your continued support in helping us to build meaningful relationships in the Asia-Pacific and congratulate you on celebrating 20 years in Australia.”

At the 20th Anniversary Gala, the society also honoured three individuals who were instrumental in the establishment and growth of Asia Society Australia: founding Chairman Hugh Morgan AC, founding Director Richard Woolcott AC, and Immediate Past Chairman, The Hon Warwick Smith AM.

“We are indebted to Hugh, Dick and Warwick for the enormous role they have played in furthering Australia-Asia relations and their tireless efforts in helping to make Asia Society Australia the leading national centre for engagement with the region that it is today.”