The Japan-Australia Training Initiative: Deterrence in the North 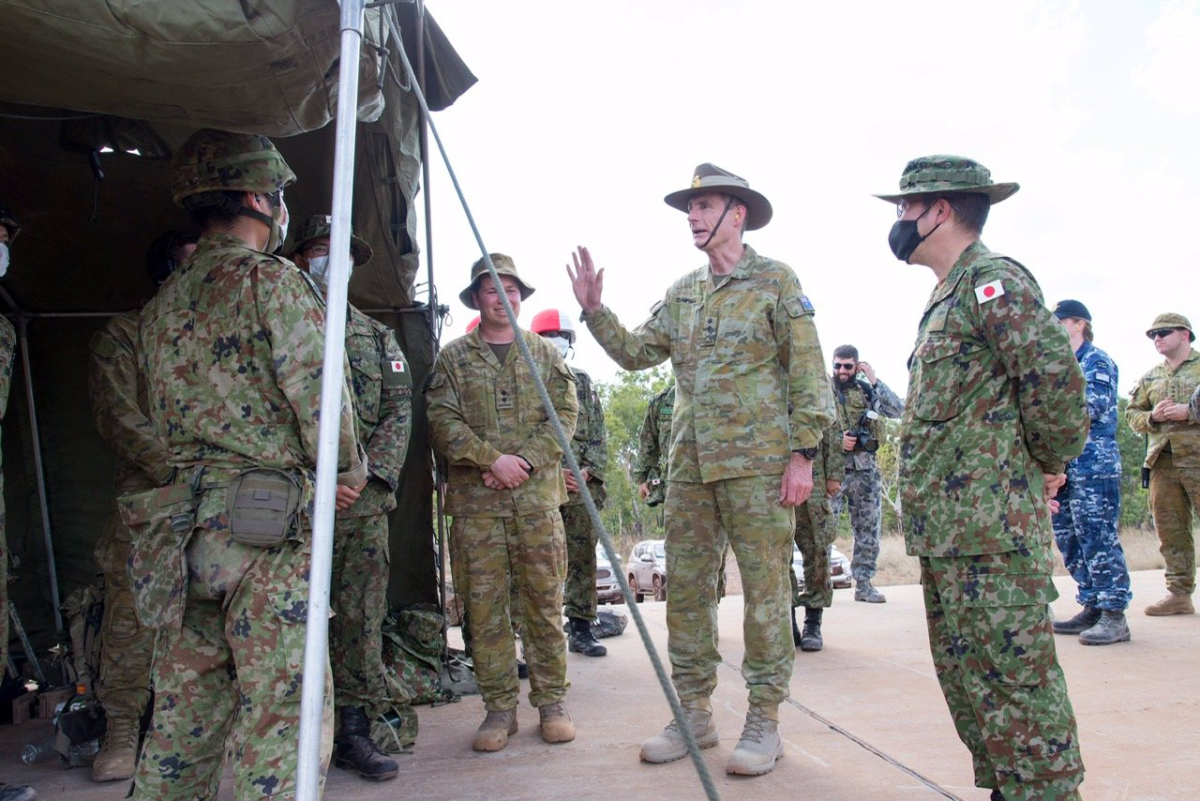 The Samurai were a fiercely disciplined warrior class who dedicated themselves to perfecting the art of warfare – code of Bushido. They formed the ruling class of Japan throughout the pre-industrial Edo Period (1603-1867). Two hundred and fifty years of relative peace prevailed and as the importance of martial skills declined the Samurai evolved to become bureaucrats, teachers and artists.

This peace was shattered in 1868 with the arrival of Perry’s ‘Black Ships’ and military technology that was not mainstream in Japan – guns and cannons. This effectively saw the end of the Samurai class as the Japanese leadership saw the need to reinvent itself. In his classic translation of the Hagakure titled Bushido: the Way of the Samurai, Minoru Tanaka writes “you cannot restore the good old days and customs and fashions of a hundred years ago… it is therefore essential to do your best according to the requirements of the present generation.” Simply stated, continuous innovation and adaptation are far superior to trying to make today look like yesterday.

I would argue that Japan has reached a similar (although far less radical) position today. Japan technically does not have a military, rather it maintains a Self-Defense Force (JSDF). The JSDF is civilian control by the Japanese Ministry of Defence with the Prime Minister as the Commander-in-Chief. It has approximately 247,000 personnel with 56,000 reservists, and is a relatively technically advanced force with a range of modern equipment, air craft, ships and primarily defensive weaponry.

Since the end of World War II, peacetime for Japan and a pacifist constitution has led to a JSDF that hasn’t seen actual warfighting for almost 80 years. This is a long time for a military not have this experience to help hone its tactics, techniques and procedures; for officers to develop battle experience and leadership; for ‘diggers’ to develop skills and combat techniques; to test equipment; and for the government to manage public reaction to personnel being involved in a conflict.

The JSDF is not without some deployment experience and has been involved in various peacekeeping, capacity building and humanitarian missions, including with the Australian Defence Force (ADF) in Iraq from 2004-2006. However this is not the same, and the JSDF now urgently needs to increase its combined arms training. The north of Australia offers the solution.

As the Bushido code states, “The wind of time is unchangeable. The wind shows that the world has entered into a stage of degeneration and that society is gradually being corrupted”. Japan saw the challenges presented by the changing winds of resurgent Chinese and Russian militaries at the early turn of this century. Their acquisition and military investments in bilateral and multilateral training have reflected on those observations. To respond to the challenges and emerging threats, Japan has been pushing the limits of its constitutional restrictions, most notably by former Prime Minister Abe. It is expected that the newly elected Prime Minister Kishida will maintain this path.

The development of the Amphibious Rapid Deployment Brigade (ARDB) – a marine unit of the JSDF responsible for conducting amphibious operations – illustrates this point. The ARDB incorporates the former Western Army Infantry Regiment, which was the dedicated amphibious warfare unit of the Japan Ground SDF (JGSDF) and conducts a full range of amphibious operations and limited training with the US Marine Corps (USMC) to enhance the necessary skills and doctrine to retake Japanese territory from a foreign power.

To support the ARDB, there has been an acquisition program of amphibious assault vehicles, modernisation of ships to support Short Take-off and Vertical Landing (STOVL) aircraft such as the F-35B, and tilt rotor platforms such as the MV-22 Osprey (used by the USMC).

However, now that the JSDF has equipped the man, it is time to man the equipment through training and multi-national experience mandatory for success in a rapidly deteriorating Indo-Pacific.

Japan and Australia are close to finalising the next important agreement under the bilateral Defence relationship that will help the JSDF take another step towards developing the skills and experience it needs.

The Australia-Japan Reciprocal Access Agreement (RAA) is important for increasing training and exercising between the JSDF and Australian Defence Force (ADF), as well as enabling the JSDF to potentially conduct unilateral training in Australia. It builds on existing military arrangements, such as the sharing of classified information and the reciprocal provision of supplies and services for such activities as: exercises and training; UN Peace Keeping Operations, humanitarian relief operations, and operations to cope with large scale disasters; transportation of nationals and others in overseas exigencies; and other routine activities.

The RAA stipulates the legal status of elements of the JSDF and ADF during their stays in each other’s country and at its core simplifies the procedures on arms, ammunition, supplies and other property brought into each other’s country when they have a temporary stay for joint drills, disaster relief, rescue operations and the like. The JSDF needs to conduct realistic training to better professionalize itself and there simply isn’t a suitable location in Japan because of Japan’s high population density and limited training space.

The Territory has four key existing training areas which already see a range of annual training serials between the ADF and US – primarily the US Marine Corps (USMC) and Air Force. The hard infrastructure at the heart of this hub are the existing Bradshaw and Delamere training ranges which together form one of the largest training spaces in the world – Bradshaw for example is larger than Belgium, and is almost three times the size of the US Army National Training Centre and over three and one half times as big as the USMC Air-Ground Training Centre. The ranges are sparsely populated ranges, close to Asia and potential future Area of Operations, have no commercial overflight and thus unlimited altitude restrictions for aircraft or long range rockets, and have little-to-no electromagnetic interference, which helps to test sensors, electronic warfare capabilities and next generation platforms.

The ADF and JSDF have developed an impressive series of exercises over the past decade and this is now second only to the US as far as depth and frequency goes for the ADF. This is very encouraging and important to help build interoperability, trust and people-to-people connections. The JSDF participates in several multilateral exercises in the Northern Territory, including Exercise KAKADU (Australia’s largest maritime exercise); Exercise PITCH BLACK (an Air Force-oriented multi-national large force deployment); and Exercise SOUTHERN JACKAROO (trilateral training with the USMC and JGSDF).

In addition to support the JSDF training requirements, there is great potential to deepen the trilateral Australia-Japan-US relationship and develop a multinational amphibious unit based in the Northern Territory – with Australian, Japanese, and US amphibious ships and the USMC as its core. Given the USMC has an existing presence in the Northern Territory this is a natural next step. This would also be useful for coordinating with other regional partners and allies for amphibious training, and also forward basing for activities such as Humanitarian Relief and Disaster Response.

It’s important that Australia capitalises on the momentum the RAA brings to the relationship. A strong first step is to develop concrete joint training opportunities in partnership with the JSDF.  The Australian Government should be – and may well be in the background – providing Japan with specific proposals for getting the JSDF to Australia routinely and perhaps in the future a modest permanent presence embedded with the ADF (as we do with the USMC Rotational Force – Darwin).

In this growing and important defence relationship, an immediate practical next step could be establishing a JSDF Liaison Office at ADF Robertson Barracks in Darwin along with increasing JSDF secondments into other ADF units and at Defence Headquarters in Canberra.

Longer-term (but not too distant), the Australian Government should be developing a permanent Japan-Australia Training Initiative located in the Northern Territory along similar lines to the long-standing Australia-Singapore Military Training Initiative (ASMTI) which is based in central and northern Queensland.

Singapore has a significant investment in the development and enhancement of training areas under the ASMTI to help meet the future needs of the ADF and facilitate an increased presence of Singapore Armed Forces personnel training in Australia. These training areas are owned and managed by the Australian Government and when the ASMTI reaches maturity, up to 14,000 Singapore Armed Forces personnel will conduct training in Queensland for up to a total of 18 weeks split into two nine week periods each year.

The RAA should help pave the way for a similar arrangement with the JSDF. There will be political and public perception hurdles to overcome on both sides – now is the time to be thinking boldly. Other jurisdictions in Australia will no doubt make the same claim, however the arguments outlined above make a strong case as to why the Northern Territory is the best choice for all parties. This could facilitate setting the sails of military cooperation to take full advantage of the prevailing winds.

Guy Boekenstein MAICD is Asia Society Australia's Northern Australia fellow and Senior Director for National Security and Defence at the Department of the Chief Minister and Cabinet, Northern Territory Government.