To become a Renewable Energy Superpower, Australia must match its Strategic Vision with a new Green Energy Statecraft 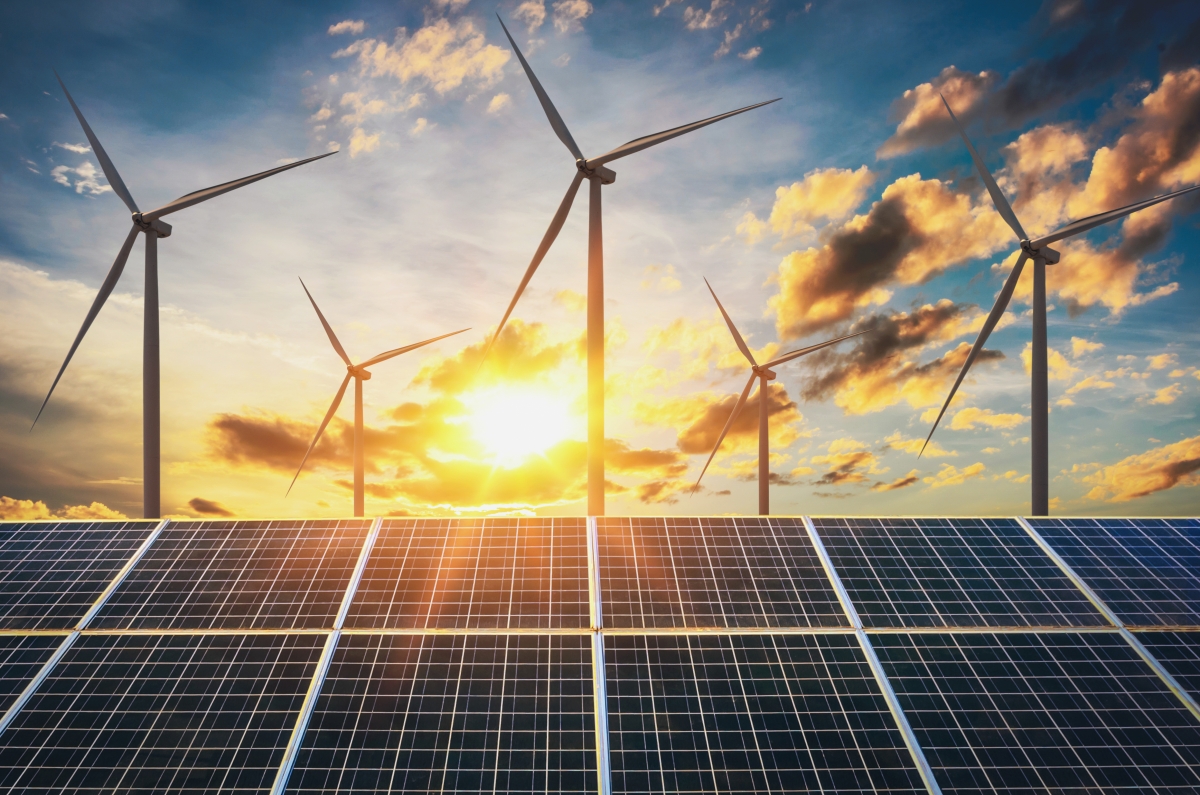 Taking power after a major electoral victory in May 2022, incoming Australian Prime Minister Anthony Albanese called for the country to “take advantage of the opportunity for Australia to be a renewable energy superpower”. This new Albanese-led administration has pledged to turbocharge the creation of world-leading green energy industries and related export capabilities at home, and to leverage those same capabilities to help its Indo-Pacific partners transform their energy systems while rapidly developing their economies in environmentally and socially sustainable ways. This bold and compelling strategic vision may hold the key to unlocking Australia’s future economic, energy and environmental security – while also boosting the country’s strategic position in defence terms.

But what will it take to become a renewable energy superpower, and is the Australian government capable of rising to the challenge?

However, we argue here that to become a ‘renewable energy superpower’ is a much more complex task than becoming a ‘fossil fuel’ one, insofar as the former demands a much more sophisticated kind of statecraft – which we call ‘green energy statecraft’.

The principle aim of this briefing paper is to distinguish between the fundamentally different kinds of statecraft involved in the fossil-fuel vs green energy era, especially when it comes to achieving superpower status. We start by defining the concept of an ‘energy superpower’, both in conventional (fossil fuel) and renewable energy terms. We then discuss the energy superpower-statecraft nexus, and identify what we see as distinctive about ‘green energy statecraft’. Finally, we highlight the three biggest new challenges for Australia as it navigates this new ‘green energy statecraft’ era.

What is a ‘superpower’, and how do they use ‘statecraft’?

In international relations, the term ‘superpower’ refers to a country that enjoys a preponderance of military and economic strength – and that is able to use that might to directly shape world events – for better or for worse. In the military realm, superpowers typically use force (or the threat of force) to advance their foreign policy goals. Likewise, in the economic arena a superpower is able to use their privileged position to set or shape the rules of the game in international trade, investment, finance, and knowledge (e.g. intellectual property). Superpowers can therefore tilt the economic playing field to their own advantage – if they so choose. They can also mobilise vast financial resources to engage in extensive foreign investment and aid initiatives that bolster their access to (and control of) economic resources around the globe, further enhancing their wealth, and often also their status and political leverage over recipient countries. The use of this array of tools to advance foreign policy goals is known generally as ‘statecraft’.

Thanks to their material might, superpowers can also play a crucial role in solving (or causing) global problems. In other words, arguably more than any other nation, a superpower’s actions (and reactions) can shape the course of history.

In much the same way, an energy superpower is a country that possesses a preponderance of energy-related resources (historically: oil, gas and coal), and that exports large volumes of these resources to the rest of the world. They may further enhance their superpower status by making significant investments in energy-related projects in other countries. Given their crucial role in the global energy supply chain, energy superpowers wield significant influence in global markets. As history has shown us, fossil fuel energy superpowers often utilise this influence as ‘energy statecraft’ to advance their broader economic and (geo)political objectives – for better or for worse.

By energy statecraft, we mean the practice of using energy-related policy to advance national security objectives, be those objectives geo-economic, geo-strategic, or both.

In 1973, oil producing countries led by energy superpower Saudi Arabia shocked the world by withholding oil from nations that supported Israel in the Arab-Israeli War, including the US and Japan. More recently, energy superpower Russia has been withholding gas from Europe as a means of pressuring the latter to relax sanctions on Moscow for its brutal invasion of Ukraine.

Superpower energy statecraft can be used to assist partners, as well as to punish belligerents. For example, over the last decade the US’ Power Africa initiative has sought to improve access to energy in sub-Saharan Africa partner states, with anticipated payoffs for US national security interests through the provision of stable societies less susceptible to extremism and terror. More recently, the Biden administration has facilitated expansion of exports of US liquefied natural gas to Europe, as a significant measure to support its European allis against the Russian aggression amid the Ukrainian war.

Thus, at the same time as they advance their own national interests through this statecraft, energy superpowers can also play a crucial role in solving (or exacerbating) global problems that affect everyone. Most importantly, by seeking to delay or halt the global transition to renewables in order to retain its status and influence, a fossil fuel energy superpower can exacerbate the global climate crisis. Alternatively, by embracing the green energy shift and seeking to become a renewable energy superpower, an erstwhile fossil fuel superpower can add major momentum behind the greening of energy systems globally, and thus contribute significantly to climate change mitigation.

So how does a country become an energy superpower – green or otherwise? And what role does statecraft play in that process?

At the height of the fossil fuel era, there was a degree of predictability as to which countries might emerge as energy superpowers. This status was largely determined by a nation’s natural endowments of oil, coal and gas, and the willingness and ability of governments to extract and export those resources around the globe. In this way, Russia and Saudi Arabia became two of the early 21st century’s most oft-cited energy superpowers, given their central role in gas and oil production.

Technology certainly plays a role, as demonstrated in the recent experience of the US becoming a new energy superpower thanks to its shale revolution. Nevertheless, becoming a fossil fuel energy superpower does not necessarily require a country to have a sophisticated techno-industrial base as a prerequisite. Nor does it necessarily confer any wider economic advantages – in terms of job creation, value add, or other social goods – poverty and a lack of industrial and social development are seen in many major oil exporting countries. And nor have aspiring fossil fuel energy superpowers been forced to develop specific statecraft capabilities. In fact, during the fossil fuel era, rather than demanding a particular statecraft approach, energy superpowerdom has bestowed specific elements of statecraft – such as the ability to weaponize energy for political purposes (see figure 1). 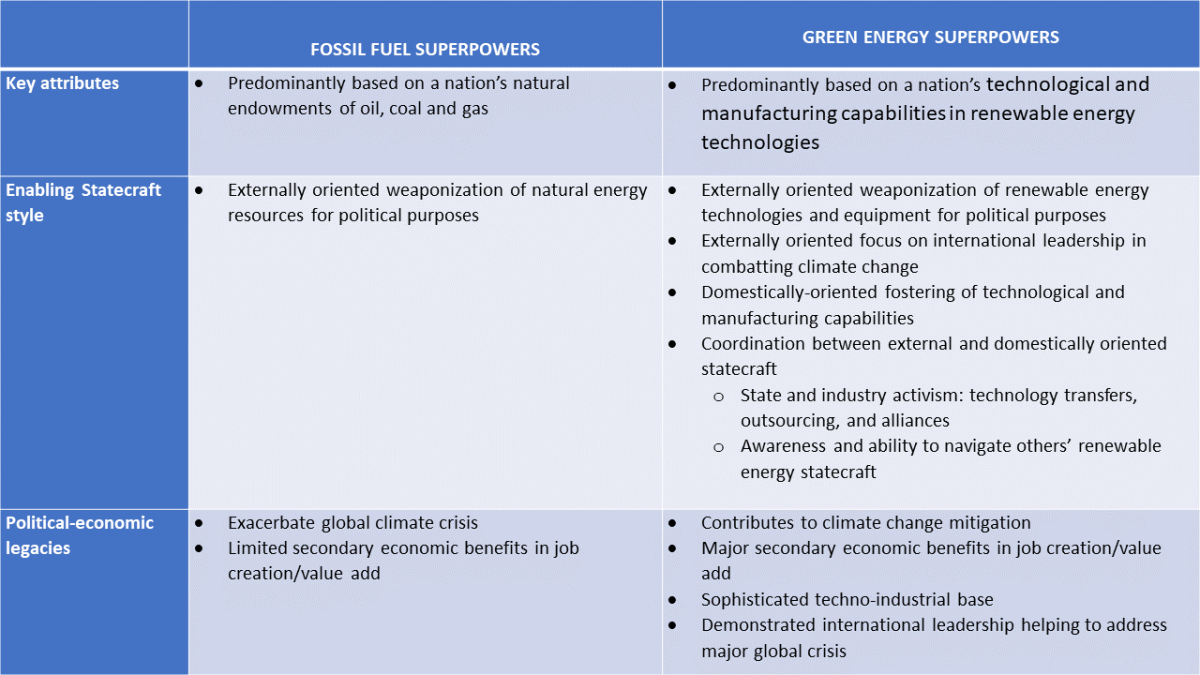 In contrast, as we move into the renewable energy era, the energy superpower-statecraft nexus appears very different. Abundant renewable energy resources, such as strong wind, water and solar capacity, would help a country’s renewable energy superpower aspiration. But, to fulfil its potential, a country also needs the ability to convert these resources into energy. The key integrant here – more critical than anything else – is the country’s technological and manufacturing capabilities to convert these resources into energy. And, to truly maximise the domestic economic rewards of this role, new renewable energy industries must be fostered and strengthened in ways that make them competitive with their foreign rivals. In other words, potential renewable energy superpowers are required to exercise ‘domestically oriented economic statecraft’, defined by Thurbon and Weiss as government ‘initiatives to make and grow markets at the techno-industrial frontier to fend off, outflank, or move in step with rival economic powers.’

Becoming a renewable energy superpower is more rewarding than its fossil fuel equivalent, given renewable energy’s domestic industry building aspects and the presence of opportunities to demonstrate international leadership in helping to solve a major global crisis. And Australia has more than enough renewable energy resources to take on this role.

However, if Australia is to cement its place among a new class of leading renewable energy superpowers, it will first have to navigate three distinct challenges, that demonstrate the greater complexity of green energy statecraft when compared to that of fossil fuel energy superpowers.

First, becoming a renewable energy superpower demands a higher degree of coordination between a state’s domestically oriented and externally oriented economic statecraft.  Canberra has struggled to lead this coordination in the past, in large part due to its general aversion to anything that smacks of ‘industrial policy’ – a dirty word in Australia.

Second, the value chains of renewable energy technologies are typically more complex and globally interconnected than those of fossil fuels. Consequently, more proactive, sophisticated, and geopolitically cognizant strategies are required to drive progress towards renewable energy superpower status. State and industry-based activism in additional forms of international involvement beyond foreign direct investment and trade, such as technology transfers, outsourcing, and alliances, can make or break a country’s bid for renewable energy superpower status.

Finally, the relative ubiquity of renewable energy sources, and the globalized nature of associated supply chains during the green energy shift, has opened up new opportunities for other countries to become key players in energy markets and to start to engage in their own green energy statecraft. As such, if Australia wishes to become a renewable energy superpower, it will have to deepen its understanding of, and ability to navigate, the green energy statecraft of others operating in this space – such as China and South Korea.

The Albanese government’s strategic vision for Australia as a renewable energy superpower is compelling, but to succeed in practice this ambition will need to be matched by a more sophisticated understanding of the kinds of statecraft currently powering the global green energy shift. Likewise, in the Indo-Pacific region, energy statecraft associated with the fossil fuel era is being rapidly superseded by green energy statecraft, leading to new and overlapping dynamics of cooperation and competition that heavily impact Australia.

In this briefing paper we have sought to specify many of the key features of energy statecraft and to highlight the ways in which an embrace of green energy statecraft implies a fundamental shift Australia’s strategic appraisal of the relationship between the domestic and external aspects of statecraft.

Elizabeth Thurbon is a Scientia Fellow and Professor of International Relations at UNSW Sydney. She writes widely on the political economy of techno-industrial strategy in East Asia and Australia is currently leading a large, collaborative ARC Discovery project (DP190103669) on East Asia’s Green Energy Shift and its global implications.

Dr. Hao Tan is an Associate Professor with Newcastle Business School in the University of Newcastle Australia. His research is focused on energy and resource transitions in Asia and their global implications. He is also a Chief Investigator on ARC DP190103669 examining East Asia’s Green Energy Shift.

The Australia and Korea: Middle Power Parallels project is supported by the Commonwealth through the Australia-Korea Foundation, which is part of the Department of Foreign Affairs and Trade. This project is undertaken in partnership with Asia Society Korea.