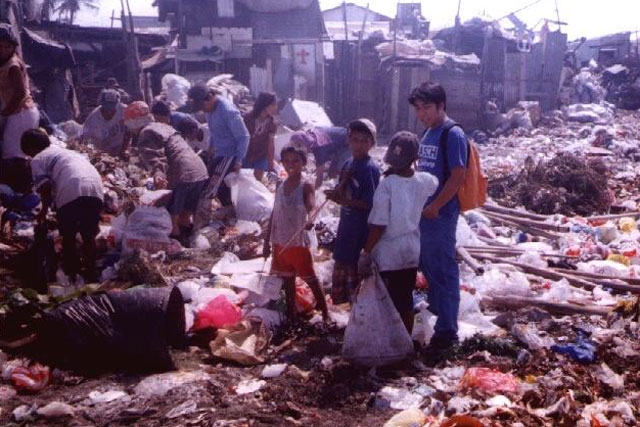 MANILA, PHILIPPINES, December 1, 2009 - 2009 CNN Hero of the Year and street education advocate Efren Peñaflorida, Jr. was one of the young leaders selected to be part of the Philippines 21 Young Leaders Initiative Class of 2009. Peñaflorida’s childhood in the slums and his personal experience with gangs—he was often bullied by gang members—led him to seek alternative activities for teenagers. Along with some high school classmates, Peñaflorida founded Dynamic Teen Company, a group of student volunteers that bring education to underprivileged children through their Kariton Klasrum (mobile classroom).

These days, Peñaflorida is a household name, thanks to the massive outpouring of local and social media support for his campaign to be CNN Hero of the Year. But he remains characteristically grounded about being thrust into the spotlight. “One shouldn’t let fame get to one’s head. As a leader we can’t do things singlehandedly, without people helping you,”  he says.

Asia Society Philippines paid a visit to one of DTC’s outreach areas, a few weeks before Peñaflorida flew to Los Angeles to attend the 2009 CNN Heroes program at the Kodak Theater, and took the opportunity to know more about his award-winning program.

AS PHILIPPINES: How does the Kariton Klasrum work?

EFREN PEÑAFLORIDA, JR.: The Kariton Klasrum has five stations: two classrooms teaching literacy skills and values formation. Then there’s a clinic—where we treat students with minor cuts and scrapes and teach basic hygiene—and a play center filled with books and educational toys. At the end of each session, we send them to the “canteen” for snacks. Food used to be the primary motivation for the kids to attend classes.  Now they’re more excited to read books at the play center. That’s why we’re making the computer lab an extension of the play center (At the time of the interview, DTC had just received a donation of two laptop computers and mobile internet access). All the computer games are educational. [Once they’re used to it], we’ll teach them typing and how to use the internet for research, and make it an extension of our literacy program as well.

We [the volunteers] did the curriculum ourselves. I collaborated with other Education majors; we follow the Montessori method, which is the teaching method I use in the private school I teach in. Our alumni nurses developed the module on First Aid.

[Like regular schools], we have an enrollment period every May. Students are committed to attend for one school year, and we require parents to sign their enrollment forms.

AS PHILIPPINES: How many students do you reach with the Kariton Klasrum?

EPJ: It depends on the time and area. We serve four sites: the marketplace, dumpsite, Himlayang Caviteño [a local cemetery], and the Badjao community. For the market and Himlayan, we average about 60 students per session, while we have about 70-80 students at the dumpsite. Badjao reaches up to 90 students per session, we take up an entire street for our class. We have five different groups of students to teach: unschooled, kindergarten, Grades 1-3, Grades 4-6, and teens [who have had no prior interaction with DTC but would like to volunteer].

AS PHILIPPINES: Dynamic Teen Company was started to give high school students an alternative to joining gangs. Has the organization made an impact on your volunteers?

EPJ: I think our volunteers have learned to value their education more, now that they’ve encountered children whose families cannot afford to send them to a formal school. They are motivated to learn and do well, so that they can impart what they’ve learned to the kids. Also, there are fewer gang-related incidents in these areas, so I think gang membership has decreased. Unlike when I was a student, I’d go out of our house and walk into a gangfight, or see gang members congregate under the bleachers in school.

AS PHILIPPINES: What will Dynamic Teen Company do with the seed money from CNN?

EPJ: We’re keeping the mobile classrooms, but there are big changes in store for Dynamic Teen Company. We’re planning to put up a space, sort of like a sanctuary for the kids – with a playground and a huge library, even a living area. We’re not yet sure if they can live there temporarily, but it can definitely be accessed even during weekdays. We’re targeting a place here in Cavite and also in Manila.

AS PHILIPPINES: What are your personal goals?

EPJ: Personally, I would like to upgrade my skills as a teacher. If given the opportunity to study in a prestigious [local] university, or even in the United States, I would like to take up a Master’s degree in education.

One of my biggest dreams is to become Secretary of the Department of Education. Some of the issues that I would address are the values formation of teachers, as well as transparency. I spoke with former Secretary Mike Luz and found out that the department’s top officials don’t know what’s happening on-ground. They don’t know that [in some public schools] teachers charge students fees for cleaning materials production of exam papers, when there should be budgets allotted for these. I would like to continue fostering a love for learning in children, whether through formal or informal education.