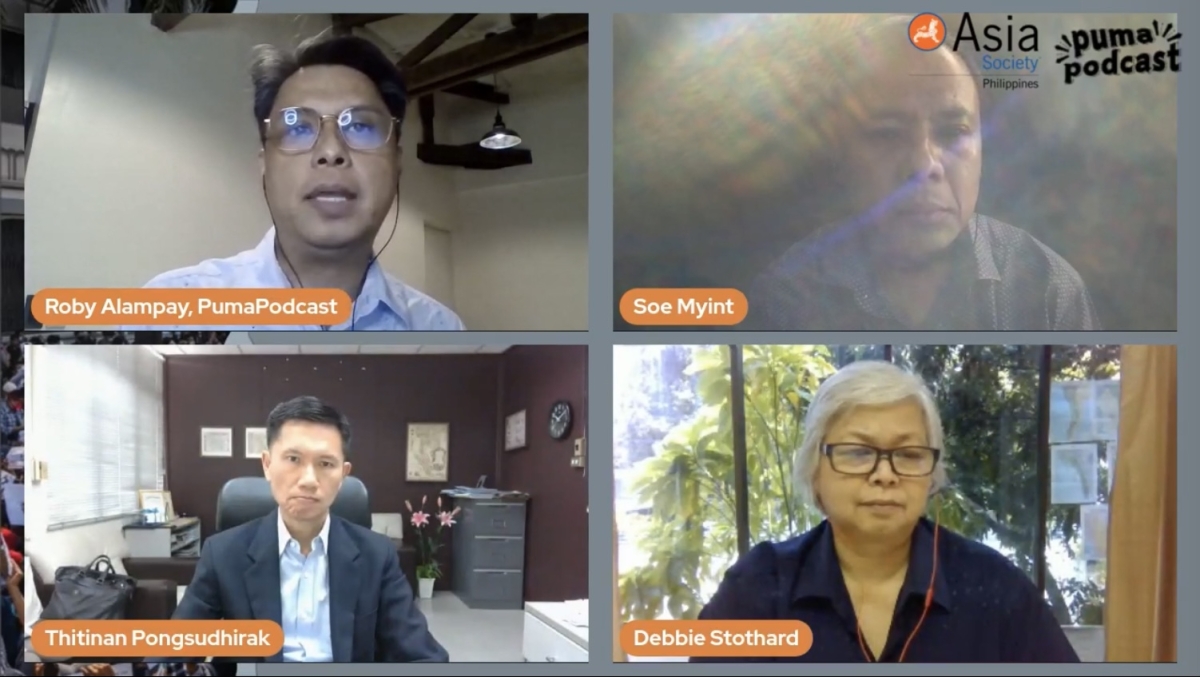 19 March 2021– Asia Society Philippines held a live digital panel discussion on the ongoing Myanmar coup which started last February 2021. The Myanmar military’s rejection of a duly-elected parliament and their takeover of Yangon’s government has plunged the country into crisis, upending years of fragile, democratic reform.

Asia Society Philippines invited 3 Southeast Asian thinkers to delve deeper on the nation’s crisis and its regional implications— Soe Myint, the founder and editor of Mizzima News, one of the leading independent news organizations in Myanmar. Debbie Stothard, coordinator of the Alternative ASEAN Network (ALTSEAN) on Burma and the Secretary-General of the International Federation for Human Rights (FIDH), and Dr. Thitinan Pongsudhirak, Professor and Director of the Institute of Security and International Studies at Bangkok’s Chulalongkorn University and an Asia 21 Young Leader. The discussion was moderated by Roby Alampay, former executive director of the Bangkok-based Southeast Asian Press Alliance and an Asia 21 Young Leader.

Soe Myint, joined the group from Myanmar, whose license to broadcast and publish in Myanmar have since been restricted by the military, talked to the audience about what it is like on the ground. “The people in the country [Myanmar] have proved again and again that they want democracy and human rights… They don’t want statements from ASEAN anymore. Otherwise, we are scared about more killings. We want ASEAN to stand on principles, to stand with the people, to look into solutions of the problems in the region”

Debbie Stothard of ALTASEAN Burma shared her views on how has ASEAN been responding to the ongoing Myanmar, “The way ASEAN expresses themselves so softly and diplomatically, it sounds as though they are only giving lip service.”

Dr. Thitinan Pongsudhirak delved deeper on ASEAN’s position and influence in the region and how has this affected their response to the Myanmar crisis. “[ASEAN’s] Non Interference Principle and good governance are both being argued by countries in the region… The more democratic, the more critical; the more authoritarian, the more lenient.”

Watch the full conversation below:

The discussion is in partnership with PumaPodcast