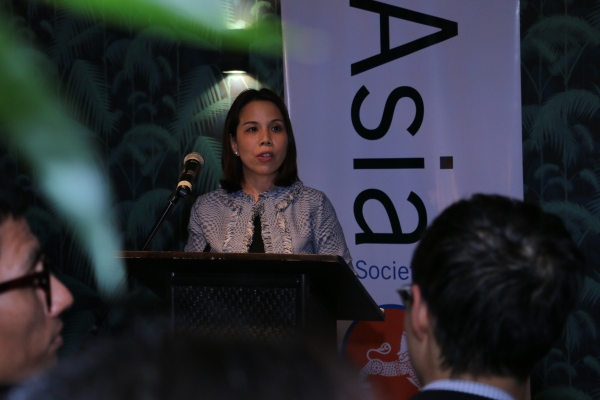 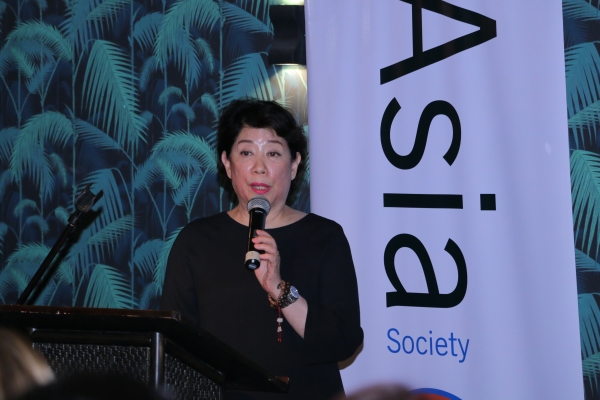 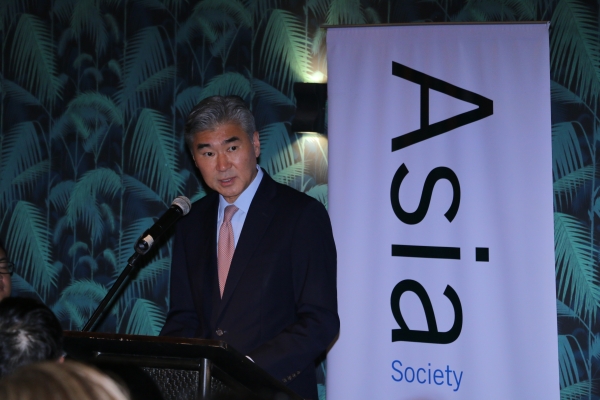 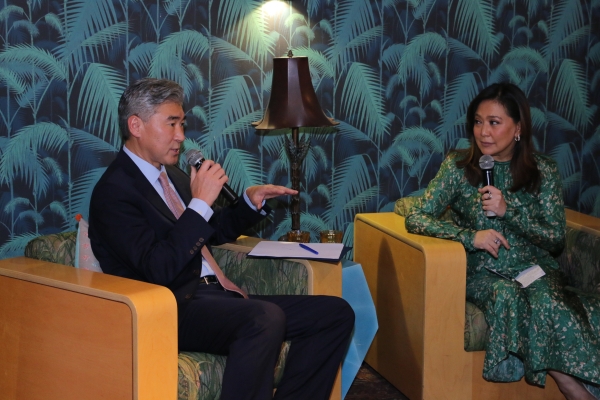 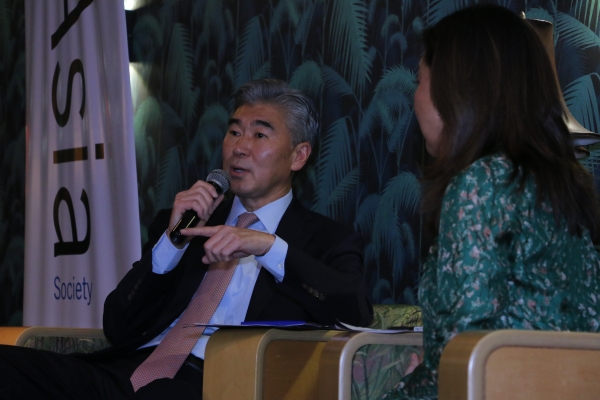 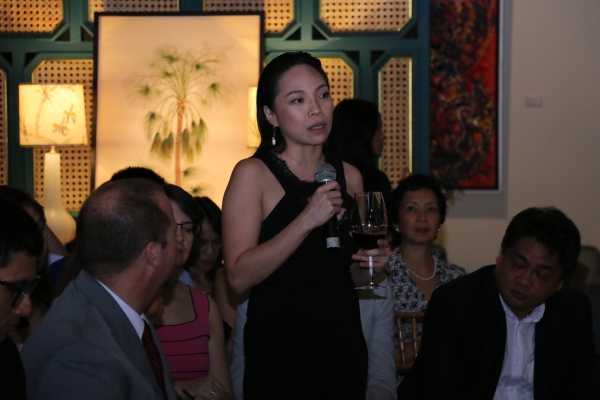 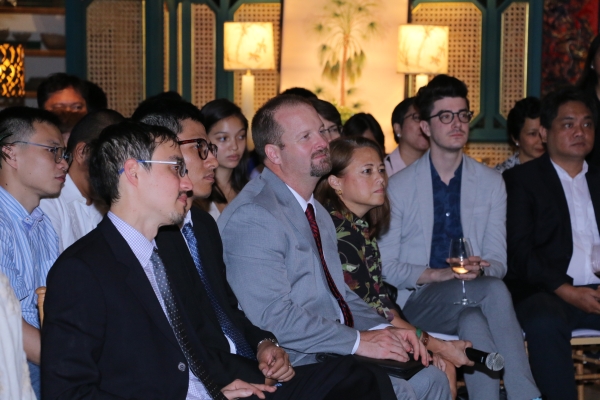 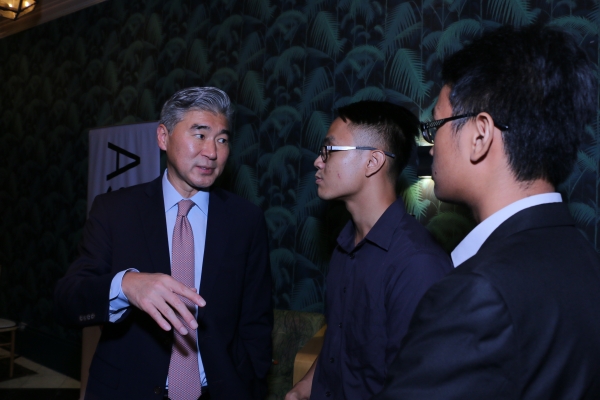 Manila House saw a packed Anahaw room on April 26, 2018 (Thursday) filled with students, Foreign Policy enthusiasts, as well as Asia Society Philippines and Manila House members, for the second edition of Asia Society Philippines’ AMBASSADOR SERIES in partnership with Manila House. This installment of the series, AMBASSADOR SERIES: America in the Philippines Today, featured Ambassador Sung Kim of the US Embassy, who sat down with award-winning broadcast journalist Karen Davila to discuss US-Philippine relations and his personal experiences working as a career diplomat in Foreign Service.

Many guests arrived prior to registration to assure good seats for the conversation. They were treated to hors d'oeuvres of Malagos Cheese and Manila House’s selection of their own signature finger foods. Asia Society Philippines’ Executive Director, Suyin Liu Lee, led attendees to their seats as the program began and proceeded to give her opening remarks. She introduced Asia Society Philippines’ Chair, Doris Ho, who gave her welcoming remarks talking about the relevance of this dialogue in a time when both countries face drastic changes under new administrations.

Upon being introduced, Ambassador Kim said a few kind words expressing excitement about the evening and optimism for the future of the relationship between the US and Philippines. After mentioning a few milestones, such as the 70th anniversary of Fulbright in the Philippines and the 5th anniversary of YSEALI (a youth leadership fellowship by the US Embassy), the conversation was ready to begin.

Moderator Karen Davila began by asking methods of communicating with current President of the Philippines Rodrigo Duterte, given the vocal nature of his opinions about the US, to which he responded kindly.

“Part of diplomacy is understanding the other party… President Duterte is quite charming and I enjoyed my meetings with him” said Ambassador Kim.

While discussing this matter he referenced the historic negotiations between North and South Korea and commended President Moon Jae-in for his diplomatic skills and drive to progressing toward a more inclusive and united future. He then followed this up with the local example of the Cesar Basa Air Base being a representation of the diplomatic cooperation between the Philippines and the US.

His Excellency asserted that despite the media’s framing and what has been said by either leader of both states, he believes that the relationship is so deeply rooted between the Philippines and US and that leadership doesn’t completely dictate the state of relations between them.

When asked about America’s stance on a shift to Asia, he said US Foreign Policy is still “strongly focused” on the world’s largest continent. “I think it’s pretty obvious we’re shifting” Ambassador Kim mentioned. During his opening speech he did recognize American companies in the Philippines like Chevron being among the top non-individual taxpayers in the country as well as being some of the top exporters as well, which preemptively supported his later points. The Ambassador refrained from commenting on Philippine tactics regarding the west Philippine Sea, because he felt “[he] [isn’t] the right person to speak on the Philippine government’s methods of negotiations.”

After the one on one was the question and answer portion with the audience. The Ambassador spoke bout how America’s mission in the Philippines is now focused on aiding disaster preparedness and relief as well as maritime security and awareness. He quickly answered other questions about American ex patriates in the country, Philippine – US VISA concerns, and more discussion about military cooperation between the two states.

Doris Ho closed the program by applauding the inspirational nature of the Ambassador’s story, being an immigrant from Korea in the US and now representing them in Asia. He acknowledged the privilege he felt being in the position he is in and implored the numerous students in the audience to consider work in public service. Thereafter was the end of the program as guests lined up to take photos with the Ambassador followed by some quick networking over wine before heading home for the evening.

The AMBASSADOR SERIES: AMERICA IN THE PHILIPPINES TODAY is the second of four dialogue-style events aimed at getting to know the diplomats serving in The Philippines on a more intimate level. This event is done in partnership with Manila House, and with the support of Malagos Farmhouse.

Stay tuned for the next edition of AMBASSADOR SERIES which will feature Ambassador Jaideep Mazumdar of the Embassy of India this coming 16 August 2018.