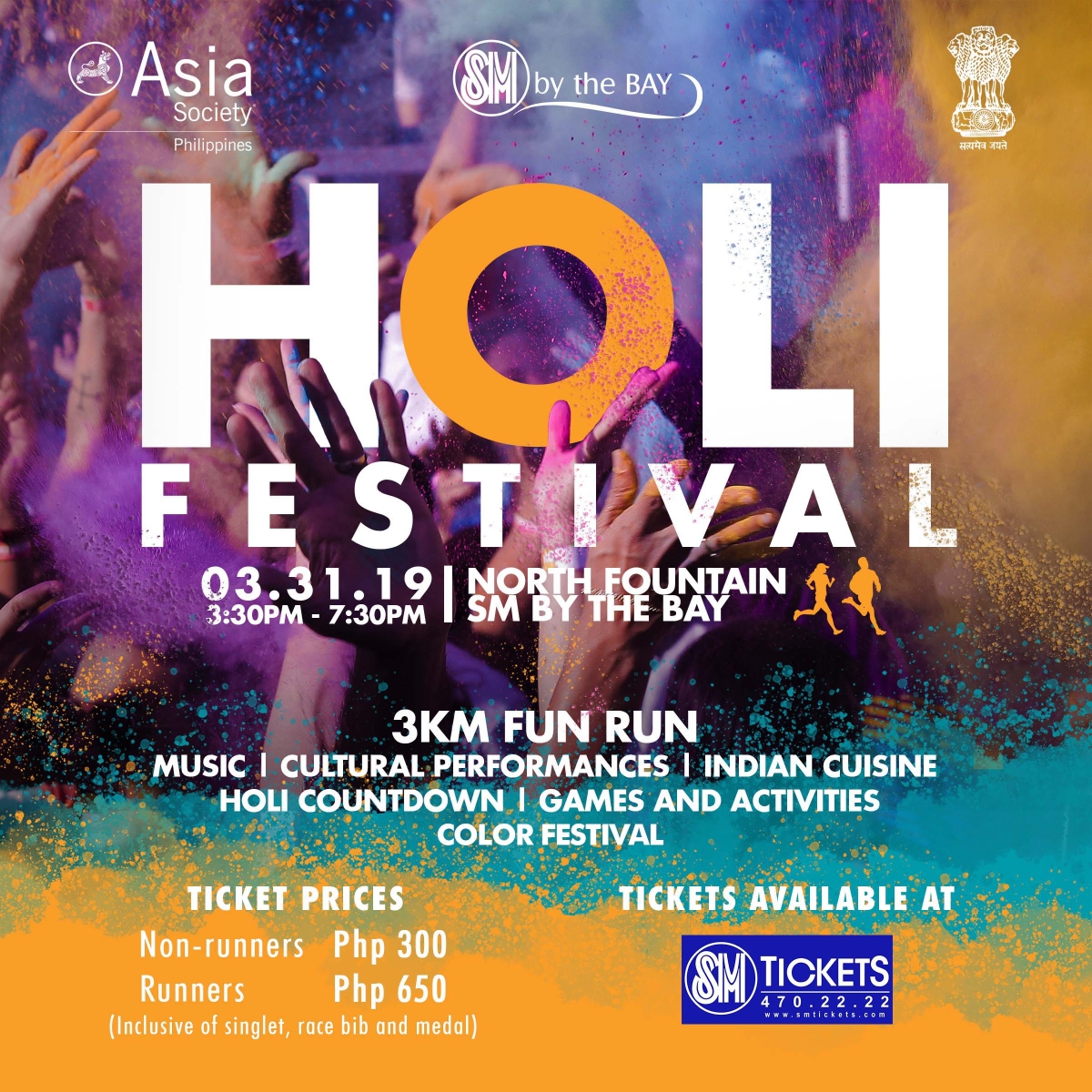 Manila, 21 March 2019 - One of India’s most celebrated festival is back in Manila! Asia Society Philippines together with SM by the BAY present the HOLI FESTIVAL 2019, the 7th annual celebration in Manila of the traditional and colorful Hindu Festival, on 31 March 2019 (Sunday) at 3:30 PM at North Fountain, SM by the BAY.

Celebrated in India since ancient times, Holi is the largest “Festival of Colors” in the world that marks the arrival of spring with accompanied festivity of joy, freedom, and unity through the playful splashing of special colored powder with friends and family. With its mission to develop programs in arts and culture, Asia Society Philippines has been hosting the annual Holi Festival for the past seven years.

HOLI FESTIVAL is a chance for the Filipino community to experience a celebration that is both culturally and religiously significant for the Indian community. It is a festive occasion to reunite and forget all enmities towards each other. Asia Society Philippines is honored to play a role in bridging the cultures of India and the Philippines, and transcend above the differences between the two nations.

HOLI FESTIVAL 2019 will also coincide with Asia Society Philippines’ 20th Anniversary and the India-Philippine Relations’ 70th Anniversary. To commemorate these two meaningful events, this year’s Holi Festival will incorporate a 3-kilometer fun run. Participating runners will be able to receive a singlet, race bib and medal which can be claimed at the Asia Society office starting on the 18th of March (9AM-5PM) or at the registration area on the event day.

A fun-filled festival also awaits the participants as performers sway and groove to cultural performances accompanied by traditional Indian songs and dances. Live DJ and drummers will ignite the crowd until nighttime—all these you can do while enjoying authentic Indian cuisine and a variety of activities such as getting a henna tattoo, Rangoli and fun games.

HOLI FESTIVAL 2019 is organized by Asia Society Philippines, SM by the Bay, Federation of Indian Chambers of Commerce (Phil.) Inc., the Indian Ladies Club, ZEE Sine, and Thinksports.ph. It is co-presented by Incredible India and PLDT Enterprise. It is sponsored by Western Union and Sun Cruises. It is supported by the New India Assurance Co., Ltd. and Flavours by Vana's. Special thanks to Bench and Ambica International Corporation.

Tickets are now on sale for only Php 300 for non-runners and Php 650 for runners. Tickets are available now at all SM Tickets in SM Cinema branches located across SM Supermalls nationwide or at smtickets.com