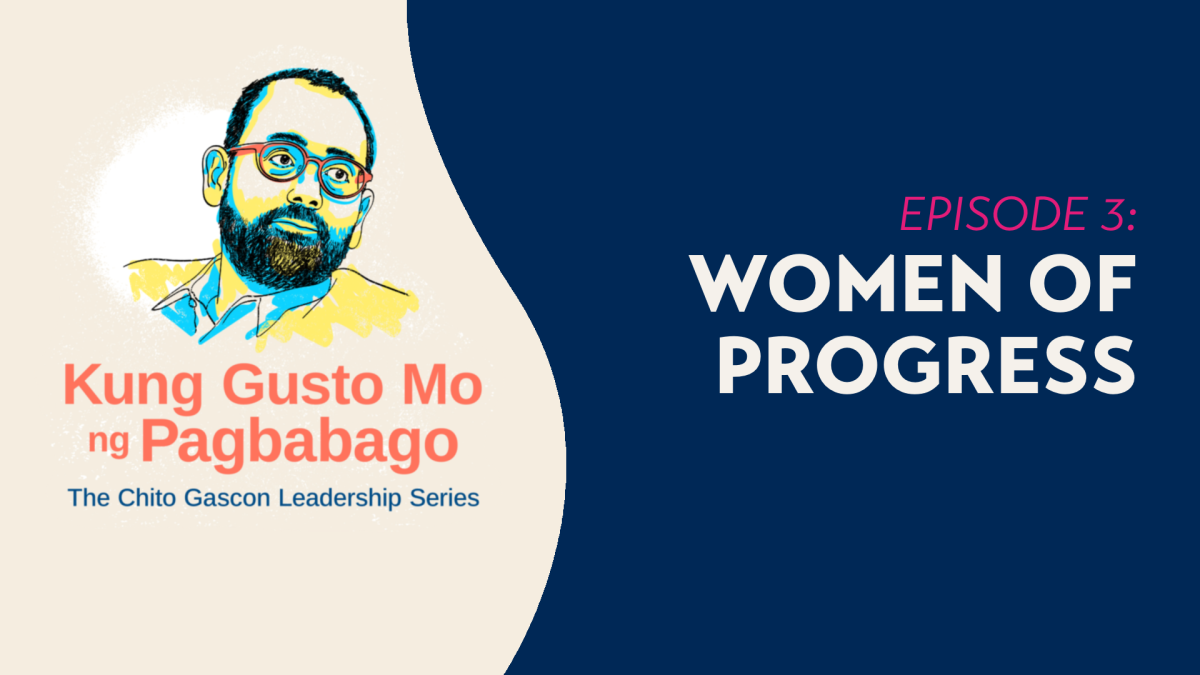 As the 2022 elections in the Philippines fast approaches, the Filipino people are at a crossroads in deciding the future of the nation. Yet the challenges faced today are not new. Filipino society has wrestled with these issues across the decades.

In Episode 3, we talk about the long fight of women of progress and how issues surrounding gender equity have changed.

Senator Risa Hontiveros is known for her tireless work in promoting public health, women's rights, and the welfare of the Filipino family. She is a multi-awarded public servant, community organizer, and journalist elected to the Senate in 2016.

In her first term, she successfully championed landmark laws, including the historic Expanded Maternity Leave Law that gives working moms 105 days of paid maternity leave, and the Philippines-Mental Health Law, the country's first ever national policy to care for Filipinos' mental health.

As a longtime health advocate, she pushed for the passage of the Universal Healthcare Law and the Expanded Anti-hospital Deposit Law to ensure the Filipino family's well-being before profit, and to make health more accessible to all.

Even amidst the pandemic, Senator Risa pushed for free dialysis for senior citizens and for the timely release of benefits and salaries for health workers.

As Chairperson of the Senate Committee on Women, Senator Hontiveros also authored the Safe Streets and Public Spaces Law or the Bawal Bastos Law that protects all Filipinos, particularly women, from gender-based harassment in the streets, public transportation, schools, and the workplace. During the biggest public health crisis of our time, she also pushed for the Maternity Benefit for Women in the Informal Economy Act, to help ease multiple burdens of women exacerbated by the pandemic.

Senator Hontiveros worked on expanding the Solo Parents' Act to further help single moms and dads in providing for their families. The Senator is also pushing for an increase on the monthly pension of senior citizens through the Lingap Para Kay Lolo at Lola Bill.

Even before becoming a legislator in 2005, she was one of 27 Filipinas who earned a nomination to the prestigious Nobel Peace Prize for her work in the peace movement.

Senator Hontiveros is a loving and hands-on solo mother to 4 children - Kiko, Issa, Helena, and Sinta.

Dr. Rica Cruz is a licensed Psychologist, certified sex and relationships therapist, and broadcaster with a PhD in Psychology and certifications from the University of Guelph, Harvard Medical School, the Society for Scientific Study of Sexuality, and the American College of Sexologists.

With an expertise on Filipino sexual behaviors and sexual pleasure, her practice centers on individuals and couples with sexual and relationship issues. She also provides sexuality education to the Filipino youth and is part of campaigns for HIV and Reproductive Health Awareness.

Her goal is to normalize conversations on sex in our country. Thus, she co-hosts a daily TV show, Feelings, on Cignal TV’s Channel 1; has two podcasts, Conservative Ako and The Sexy Minds; and hosts Love and Sex with Doc Rica on Kumu in partnership Metro.Style. Recently, she launched her own sexual wellness store called UNPRUDE, that encourages women everywhere to explore their sexual selves freely and become experts of their own body and pleasure.

Sabrina Gacad Social scientist by training, feminist at heart, Sabrina Gacad finds pleasure in defying patriarchal and capitalist regulation of bodies, identities, relations, and aspirations. Through her work, she encourages people to live fully in their own bodies, and contributes to the growth of communities that support people’s pleasures.

Inna is presently an Assistant Professor at the Department of Women and Development Studies, at the College of Social Work and Community Development in UP Diliman. Her research interests include Filipino sexuality, reproductive health behaviours and policies, and authentic movement. She also maintains a meditative movement practice and offers private classes.

Inna was an Australia Awards scholar and received a Master of Economics  from the University of Sydney in 2019.

She is also the founder of Lunas Collective, a volunteer-powered online helpline and care space for people seeking support related to gender-based violence, and reproductive health. Launched in March 2020, this project is a response to the vulnerabilities that Covid-19 and the enhanced community quarantines created for women and people of diverse SOGIE across the Philippines.  Lunas Collective’s helpline operates from Monday to Saturday 1-4pm.

Ami Swanepoel is the Founding Executive Director of Roots of Health and the local administrative arm of the organization, Ugat ng Kalusugan, a reproductive health organization in the Philippines. Amina provides leadership in the day-to-day running of the organization and is the liaison with the Roots of Health Board of Directors in the United States and in the Philippines. She oversees the organization’s management and fundraising. She is a member of the Provincial Family Health Council of the Province of Palawan, and of the Puerto Princesa City Local Health Board. She is a Philippines Ashoka Fellow, an Equity Initiative Fellow, a past Vital Voices Lead and Global Ambassadors Fellow, and an Asia Society Asia 21 Young Leader.

Prior to this post, Amina spent two years at Human Rights Watch where she researched and documented human rights abuses in Asia. She also previously held positions with the Guttmacher Institute and the Program Division of UNHCR in India.