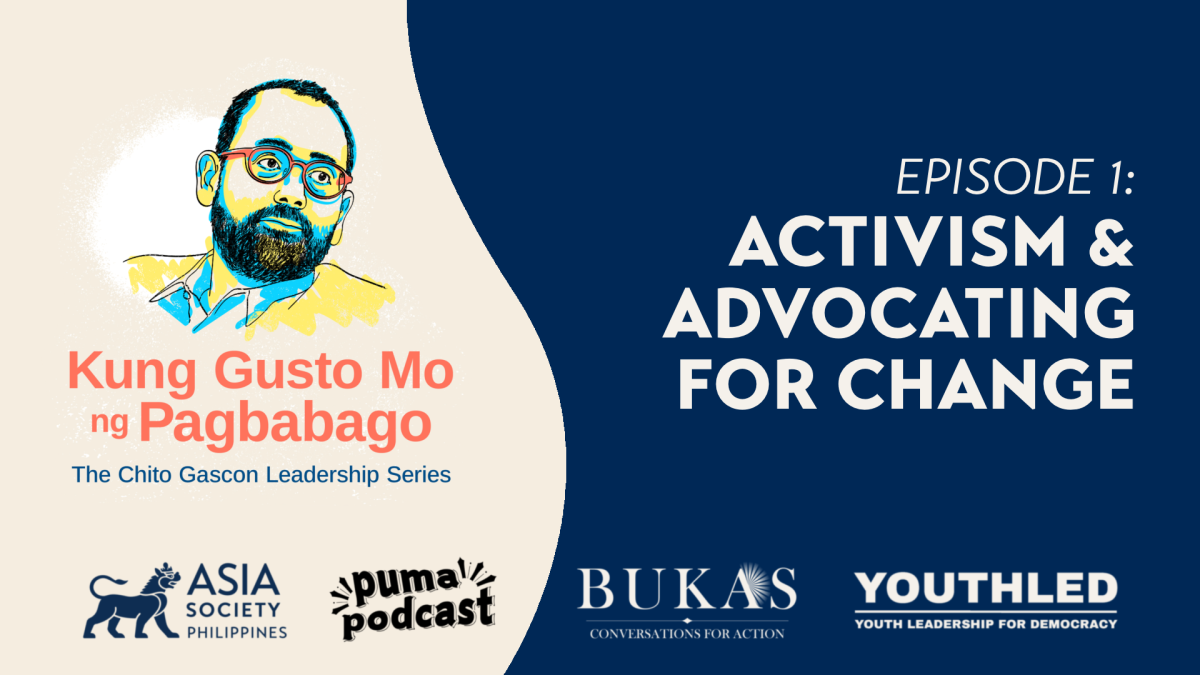 As the 2022 elections in the Philippines fast approaches, the Filipino people are at a crossroads in deciding the future of the nation. Yet the challenges faced today are not new; as Filipino society has wrestled with these issues across the decades.

Episode 1: Activism and Advocating for Change

Episode 1: Activism and Advocating for Change is happening this January 28th, 2022 at 6:00PM (PHT). Follow Asia Society Philippines on Facebook and YouTube (@AsiaSocietyPH) and tune in!

Click here or the 'Register' button to register and get an email reminder before the program starts!

Theodore "Ted" Te has been involved in human rights work since his student days as a paralegal at the University of the Philippines College of Law; immediately after becoming a lawyer, he volunteered for the Free Legal Assistance Group (FLAG), the oldest human rights lawyers network in the country. He is currently the regional coordinator for FLAG Metro Manila. He has litigated cases at all levels of the court system, having presented oral argument to the Court of Appeals as well as to the Supreme Court on many occasions. He has also filed communications before international human rights bodies in representation of death row convicts. Among his chief advocacies are abolition of capital punishment, freedom of expression and freedom of the press, and the protection of civil and political rights.

He has written and lectured extensively on many aspects of human rights protection and defense and is a regular resource person for media on many issues of the day. He is also an active podcaster and an occasional columnist. He has an active social media presence over facebook, twitter, and Instagram.

He has degrees in Psychology and in Law, both from the University of the Philippines and a Masters in Law from Columbia Law School.

Ruby Rosselle “Ross” Tugade is a Fellow at the Center for International Law Philippines. Prior to joining CenterLaw, she was part of two national human rights mechanisms: the Human Rights Victims’ Claims Board and the Commission on Human Rights of the Philippines. She is also a law and political science lecturer at the University of the Philippines College of Law and the Ateneo de Manila University, where she earned her Juris Doctor and AB Political Science degrees, respectively. In 2020, she earned a Master of Laws degree from the United Nations Interregional Crime and Justice Research Institute in Turin, Italy. Ross is also a published writer in various international and local publications.

Kenneth Isaiah "Ken" Ibasco Abante organizes and does policy research with civil society movements Move As One Coalition for public transport, Citizens' Budget Tracker for budget transparency and accountability, and Tarabangan Kontra COVID-19 to strengthen the local health emergency response of Naga City and Camarines Sur. He serves as Managing Director of Practice and Partnerships at WeSolve Foundation, a social purpose organization that supports collective action movements towards sustainable impact. He served in the Department of Finance in roles covering tax, customs, local finance, budget, economic policy and strategy, and the leadership transition. Ken finished with a management engineering program, with a minor in philosophy, from Ateneo de Manila University in 2012; and a master in public administration in international development from Harvard Kennedy School in 2019. He loves to cook adobo, but recognizes his cooking is not nearly as good as his mother's.

Marianne "Maien" Joy Vital is an independent researcher in the fields of education, public sector management, and international trade and development. She does research consultancy work with multilateral organizations such as the World Bank HQ (Washington, DC, United States) and the Asian Development Bank HQ (Manila, Philippines). She is a part-time Economics lecturer at the UP Los Baños and the De La Salle University Manila. She obtained her MPhil from the University of Cambridge in the United Kingdom, and her Bachelor's and Master's degree from the UP Diliman School of Economics. As a personal project, she is a co-founder and content contributor of Usapang Econ, which explains economic concepts to a wider audience through blog articles, video explainers, and podcasts.