Episode 2: The Journey of Textiles in Southeast Asia 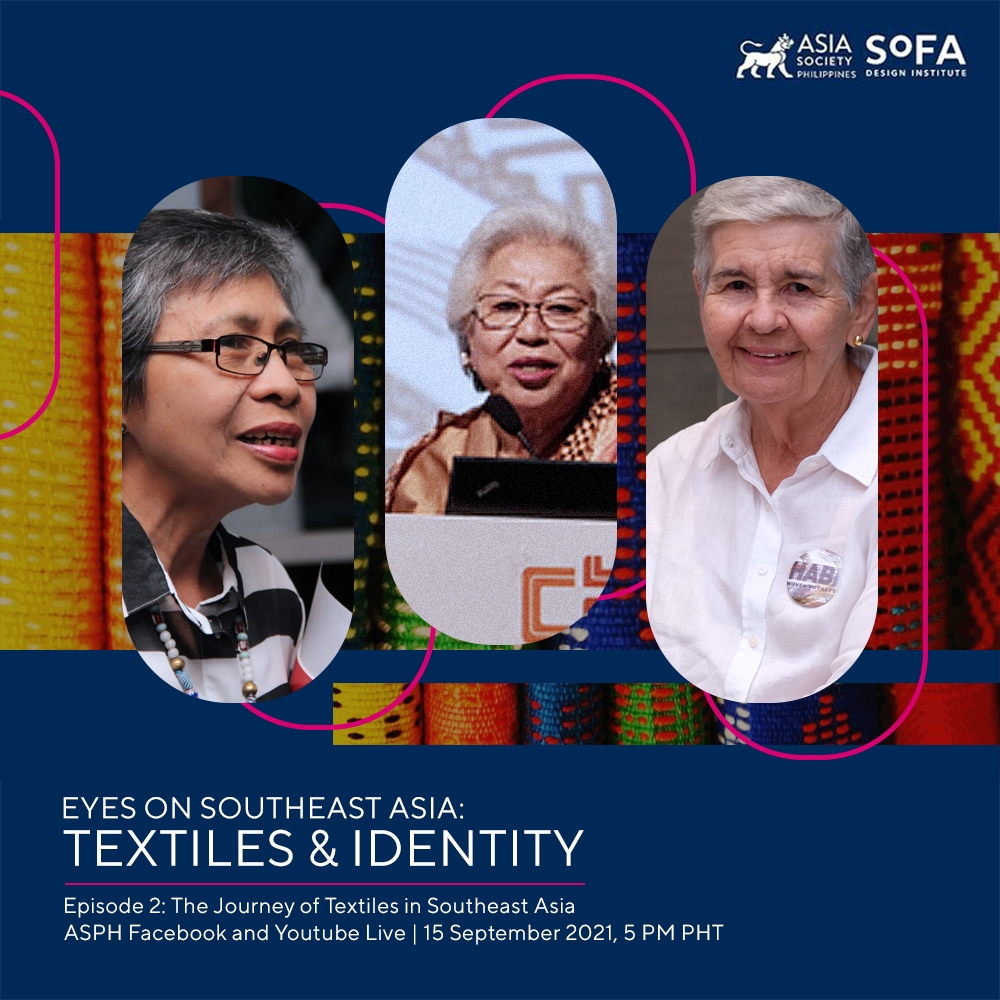 Eyes on Asia is a program of Asia Society Philippines which aims to highlight and promote understanding of an Asian country or region through its policy, culture, and arts - spanning discussions and activities to discover what is beyond the surface.

Eyes on Southeast Asia: Textiles and Identity is a three-part series developed and produced in partnership and collaboration with SoFA Design Institute. The series highlights the diverse and rich culture of Southeast Asia through in-depth and personal conversations with creatives, changemakers, and experts.

In Eyes on Southeast Asia: Textiles and Identity, we explore our rich culture of textiles and its link to our identity as peoples.

Episode 2: The Journey of Textiles in Southeast Asia

Southeast Asia's diversity can be symbolized by many of the region's spectacularly colorful and intricate textiles. In these are reflected histories and heritage that are in many instances linked and tied to one another. Learn more about Southeast Asia's fabrics, and what they teach about the region's peoples and their interwoven lives.

Carla is a licensed Designer of Human-Centered Products and Built Environments; an Educational Innovator and an Entrepreneur. She considers herself a lifelong learner passionate about exploring possibilities and pushing the boundaries of what is and what could be.

Her interests in merging Art, Science, Business and Tech apply in her cross-disciplinary endeavors that include innovating user experiences through Signature Spaces, an e-mentoring platform for Interior Design DIYers; exploring the boundaries of wearable art through Studio CLEO, a bespoke metalsmithing and glassblowing studio; rethinking what Design Education should be as the Chairperson of the Interior Design Program of SoFA Design Institute & in Furniture Design as an Research & Development consultant for furniture brands & manufacturers in the Philippines. Currently, she is working with thinktank, Studio Idiyanale and is leading a study on bringing the Philippine Creative Economy to a global scale.

Dr. Norma Respicio, Professor of Art Studies, College of Arts and Letters, University of the Philippines-Diliman

Dr. Norma Respicio is a PhD holder in Philippine Studies from the University of the Philippines, Diliman. Her primary fields of specialization are; 1) the history and aesthetics of traditional art forms with special focus on the textiles of the Philippines (and Southeast Asia) and those of Japan (and East Asia), 2) the management and documentation of tangible and intangible art forms (e.g., songs, epics, indigenous skills and technology), and 3) the safeguarding of heritage sites (built and natural) in the Philippines. She has also done in-depth studies on Japanese textile art history and aesthetics over decades in several institutes in Japan, earning prestigious fellowships including the Japan Foundation’s.

Dr. Respicio earned the Most Outstanding Researcher’s Award in the Centennial of Philippine Independence Gawad Chancellor’s Awards, University of the Philippines in 1998. Recent publications include “Journey of a Thousand Shuttles, The Philippines Weave” published by NCCA and the US Embassy, 2014, and “Tawid, The Living Treasures of Ilocos Sur” (as co-author), Sanicua Publication, the Philippines, 2010, to name but a few.

Mariah obtained her PhD in Educational Administration and Policy Studies at the State University of New York (SUNY) at Albany, NY, USA in 1991. From 1992 – 2006 she lectured at the University of Indonesia, Faculty of Social and Political Sciences – Anthropology Department.

As a scientist, Dr. Waworuntu has represented Indonesia on various traditional textile forums, worldwide. From 2014 to 2016 she was part of Queen Sirikit Museum of Textiles Team, researching the Batik Collection of King Rama V of Thailand. She represented the TTASSEA on the first and 3rd International Association of the Study of Silk Road Textiles (IASSRT) respectively in 2015 in Hangzhou, China and in November 2018, in Buyeo, Korea. Dr. Waworuntu also participated in an International Scientific Textile Conference from 14 to 15 September 2018 in Margilan, UZBEKISTAN. She contributed her knowledge in two UNESCO Expert meetings, on 12-13 September 2018 in Uzbekistan and in an UNESCO Expert Silk Road Conference in Valencia, Spain from 13 – 15 March 2019. From 5 – 8 November 2019, Dr. Mariah was one of the proponents cum Secretary General of the 7th ASEAN Traditional Textile Arts Symposium held in Yogyakarta.

Maria Isabel Garcia Ongpin founded HABI, The Philippine Textile Council, Inc. after hosting the second ASEAN Traditional Textile Symposium in Manila in 2009 and upon discovering the absence of a national textile society. Since then she has nurtured the council and guided its growth.  She lead Philippine delegations in subsequent meetings of the Traditional Textile Symposium in Malaysia, Vietnam, Thailand, Brunei, and Indonesia.

Mother and grandmother to an accomplished family, she is the widow of former Finance Secretary Jaime Ongpin.  Among her colleagues she truly deserves the rank of Wise Woman Elder.

Designed for creatives under the creative economy, the program is anchored on the  principles of Nation Branding in setting & implementing measurable metrics &  standards for globalization of the Filipino Brand & Identity.

The Filipino Branding & Identity Masterclass is a 10-day intensive, informative & creative course that teaches students the concepts behind the curation of successful Creative Filipino brands that offer products & services primed for the Global market. Divided in to 2 modules of 5 sessions each, the student will undergo a process of Reflection, Discovery & Articulation that’s firmly rooted in Philippine Culture, Anthropology, Philosophy & Art together with Design Thinking to transform & align a brand’s ethos, visual identity, structure and communication with global standards of Nation Branding.