The QUAD and Potential for Future Collaboration

Program 2 of 8 in our Seeking Truth Through Facts U.S.-China Program Series 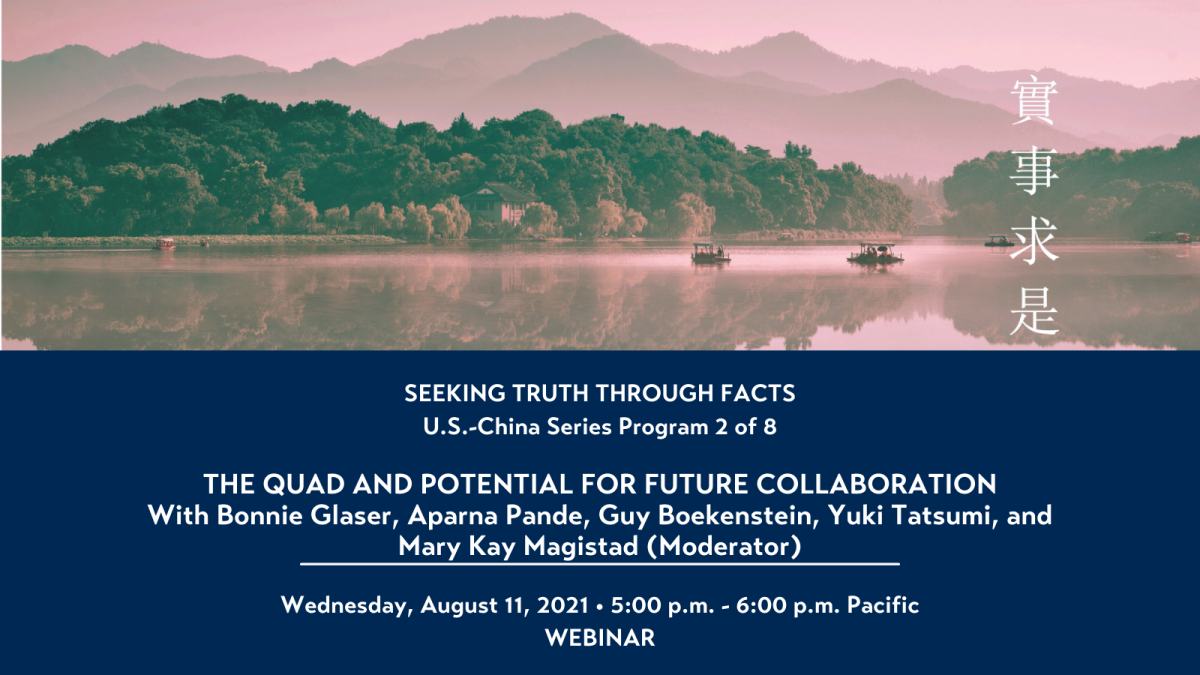 On Wednesday, August 11, 2021 from 5:00 p.m. - 6:00 p.m. Pacific, Asia Society Northern California will host a virtual program on The QUAD and Potential for Future Cooperation. This will be a public, on-the-record event.

This panel discussion will focus on the views and policies of the QUAD towards China, including areas of cooperation, competition, and potential conflict.

Bonnie S. Glaser is Director of the Asia Program at the German Marshall Fund of the United States. She was previously senior adviser for Asia and the director of the China Power Project at the Center for Strategic and International Studies. Ms. Glaser is concomitantly a nonresident fellow with the Lowy Institute in Sydney, Australia, and a senior associate with the Pacific Forum. For more than three decades, Ms. Glaser has worked at the intersection of Asia-Pacific geopolitics and U.S. policy. From 2008 to mid-2015, she was a senior adviser with the CSIS Freeman Chair in China Studies, and from 2003 to 2008, she was a senior associate in the CSIS International Security Program. Prior to joining CSIS, she served as a consultant for various U.S. government offices, including the Departments of Defense and State. Ms. Glaser has published widely in academic and policy journals, including the Washington Quarterly, China Quarterly, Asian Survey, International Security, Contemporary Southeast Asia, American Foreign Policy Interests, Far Eastern Economic Review, and Korean Journal of Defense Analysis, as well as in leading newspapers such as the New York Times and International Herald Tribune and in various edited volumes on Asian security. She is also a regular contributor to the Pacific Forum web journal Comparative Connections. She is currently a board member of the U.S. Committee of the Council for Security Cooperation in the Asia Pacific and a member of both the Council on Foreign Relations and the International Institute for Strategic Studies. She served as a member of the Defense Department’s Defense Policy Board China Panel in 1997. Ms. Glaser received her B.A. in political science from Boston University and her M.A. with concentrations in international economics and Chinese studies from the Johns Hopkins School of Advanced International Studies.

Aparna Pande is Research Fellow & Director of Hudson Institute’s Initiative on the Future of India and South Asia. Aparna wrote her PhD dissertation on Pakistan’s foreign policy. Her major field of interest is South Asia with a special focus on India, Pakistan, Afghanistan, Foreign and Security Policy. Aparna has contributed to The American Interest, The Hindustan Times, The Times of India, The Live Mint, Huffington Post, Sunday Guardian, The Print, and Real Clear World. A 1993 graduate of Delhi University, Aparna holds a Master of Arts in History from St. Stephens College at Delhi University and a Master of Philosophy in International Relations from Jawaharlal Nehru University. Aparna Pande received a Doctorate in Political Science from Boston University in 2010.

Guy Boekenstein MAICD is the inaugural Northern Australia Fellow at Asia Society Australia, in partnership with the Northern Territory Government. Guy is a senior official with an established track-record in international and strategic policy, intelligence and industry development in the Commonwealth and State governments. He has also served in Australian Embassies in Tokyo and Jakarta. Guy currently holds the position of Senior Director for National Security and Defence at the Department of the Chief Minister and Cabinet, Northern Territory Government. Previous roles include Senior Manager for ASEAN and India in the Trade and Investment Branch of the NSW Department of Premier and Cabinet, various senior roles in the International Policy Division at the Department of Defence, and the International Policy, Intelligence and Operations Senior Adviser to Minister for Defence. He has worked with the Australian Strategic Policy Institute, US Centre for Strategic and International Studies, US Centre for Strategic and Budgetary Assessments, Japanese and Indonesian think-tanks and is the only Australian non-Executive Director on the Board of the International Security Industry Council of Japan. As the Northern Australia Fellow, based in Darwin, Guy will pursue collaborative policy projects focused on Northern Australia’s engagement with the Indo-Pacific region and represent Asia Society Australia in the region for a period of 12 months.

Yuki Tatsumi is a Senior Fellow and Co-Director of the East Asia Program and Director of the Japan Program at the Stimson Center. Before joining Stimson, Tatsumi worked as a research associate at the Center for Strategic and International Studies (CSIS) and as the special assistant for political affairs at the Embassy of Japan in Washington. Tatsumi’s most recent publications include Balancing Between Nuclear Deterrence and Disarmament: Views from the Next Generation (ed.; Stimson Center, 2018) Lost in Translation? U.S. Defense Innovation and Northeast Asia (Stimson Center, 2017). In September 2006 Tatsumi testified before the House Committee on International Relations. She is a recipient of the 2009 Yasuhiro Nakasone Incentive Award. In 2012 she was awarded the Letter of Appreciation from the Ministry of National Policy of Japan for her contribution in advancing mutual understanding between the United States and Japan. A native of Tokyo, Tatsumi holds a B.A. in liberal arts from the International Christian University in Tokyo, Japan and an M.A. in international economics and Asian studies from the Paul H. Nitze School of Advanced International Studies (SAIS) at Johns Hopkins University in Washington.

Mary Kay Magistad (Moderator) is Associate Director of the Center on US-China Relations at Asia Society. Her podcast “On China’s New Silk Road” was created with the Global Reporting Centre, in collaboration with journalists from the countries in focus.  Mary Kay has long experience reporting throughout Asia and about China’s impact around the world.  She opened NPR's first Beijing bureau in the mid '90s, and returned for the BBC/PRX program "The World” (2003-13).  Earlier, she was NPR’s Southeast Asia correspondent.  She has reported in every province in China, most countries in Asia, and several in Africa, on how China's fast economic growth and rise as a global power were affecting individual lives, and reshaping the global economy, environment and political equations.  Mary Kay’s "Whose Century Is It?" podcast, a Webby Awards honoree,  takes a long view on how different kinds of power, or lack of it, are shaping our shared long-term future.   Mary Kay has taught international reporting, and headed  the audio journalism program, at UC Berkeley’s Graduate School of Journalism. Mary Kay received a BS in journalism, with a second major in history, from Northwestern University, and an MA in international relations from Sussex University in England. She’s been a Nieman Fellow and Radcliffe Fellow at Harvard University.  Her work has received awards from the Overseas Press Club, dupont-Columbia, and the Society of Professional Journalists/Sigma Delta Chi, among others.