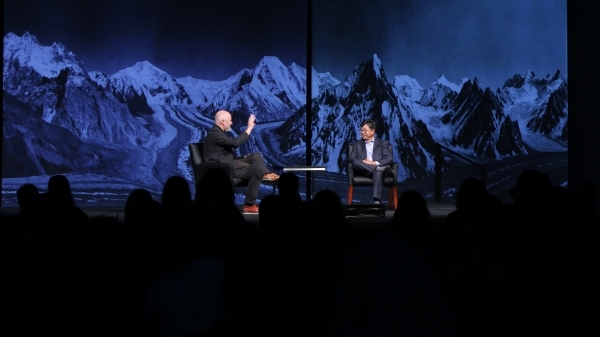 Join Asia Society Northern California as it hosts its second The Long Conversation, a collaboration with the Long Now Foundation as part of Asia Society's COAL + ICE exhibition on Monday, March 21, 2022 from 5:00 p.m. – 7:00 p.m Pacific.  This will be a virtual event with live rolling 15-minute conversations with experts and leaders from climatology, journalism, energy policy, and U.S.-China relations, in a relay of two-person dialogues focused on the climate crisis – its causes and consequences.

Registration is free and open to the global community. Suggested donation is USD 25.00.

The best minds on climate change will engage in a series of 15-minute rolling conversations. Speaker A will interview Speaker B for 15 minutes, after which Speaker B will interview Speaker C and so on. Each conversation will involve two experts from different backgrounds with a focus on China's energy policy, its relationship to environmental activism, or the future of technology.

This conversation is part of Asia Society’s larger COAL + ICE exhibition held by Orville Schell, the Arthur Ross Director of the Center on U.S.-China Relations from ​​March 15 - April 22, 2022 in Washington D.C. The exhibition will hold 48 projectors that will illuminate the 30,000-square-foot exhibition space built on the John F. Kennedy Center of Performing Arts in REACH Plaza.  Additionally, a vibrant six-week festival of events will transform the center of the exhibition into a stage for music, theater, panel discussions, art-making and more.

Thank you to Susy & Jack Wadsworth for supporting this program.

Link to join virtually via Zoom will be emailed the day before and an hour before the program is scheduled to begin by Rexille Uy, Director of Programs (ruy@asiasociety.org).  This will be a webinar program; attendees will not appear on camera.

The Honorable Kevin Rudd is the President and Chief Executive Officer of Asia Society, effective January 1st, 2021 and current President of the Asia Society Policy Institute. He served as Australia’s 26th Prime Minister (2007-2010, 2013) and as Foreign Minister (2010-2012). He is also a leading international authority on China. He began his career as a China scholar, serving as an Australian diplomat in Beijing before entering Australian politics. Mr. Rudd joined the Asia Society Policy Institute (ASPI) in New York as its inaugural President in January 2015. ASPI is a “think-do tank” dedicated to using second-track diplomacy to assist governments and businesses in resolving policy challenges within Asia, and between Asia and the West.

Orville Schell is the Arthur Ross Director of the Center on U.S.-China Relations at Asia Society in New York. He is a former professor and Dean at the University of California, Berkeley Graduate School of Journalism.  Schell is the author of 15 books, 10 of them about China, and a contributor to numerous edited volumes. His most recent books are: Wealth and Power, China’s Long March to the 21st Century; Virtual Tibet; The China Reader: The Reform Years; and Mandate of Heaven: The Legacy of Tiananmen Square and the Next Generation of China’s Leaders. He has written widely for many magazine and newspapers, including The Atlantic, The New Yorker, Time, The New Republic, Harpers, The Nation, The New York Review of Books, Wired, Foreign Affairs, The China Quarterly, The New York Times, The Washington Post, and The Los Angeles Times.

Schell was born in New York City, graduated Magna Cum Laude from Harvard University in Far Eastern History, was an exchange student at National Taiwan University in the 1960s, and earned a Ph.D. (Abd) at University of California, Berkeley in Chinese History. He worked for the Ford Foundation in Indonesia, covered the war in Indochina as a journalist, and has traveled widely in China since the mid-70s.  He is a Fellow at the Weatherhead East Asian Institute at Columbia University, a Senior Fellow at the Annenberg School of Communications at USC and a member of the Council on Foreign Relations. Schell is also the recipient of many prizes and fellowships, including a Guggenheim Fellowship, the Overseas Press Club Award, and the Harvard-Stanford Shorenstein Prize in Asian Journalism.

Jennifer Holmgren is CEO of LanzaTech. Under Jennifer’s guidance, LanzaTech is developing a variety of platform chemicals and fuels, including the world’s first alternative jet fuel derived from industrial waste gases.  She is also the Director and Chair of the LanzaJet Board of Directors.  Prior to LanzaTech, Jennifer was VP and General Manager of the Renewable Energy and Chemicals business unit at UOP LLC, a Honeywell Company. While at UOP, she was a key driver of UOP’s leadership in low carbon aviation biofuels.

Jennifer has authored or co-authored 50 U.S. patents and more than 30 scientific publications and is a member of the National Academy of Engineering. She is on the Governing Council for the Bio Energy Research Institute in India. The institute has been set up by the DBT (Department of Biotechnology, Indian Government) and IOC (Indian Oil Corporation).  She also sits on the Advisory Council for the Andlinger Center for Energy and the Environment at Princeton University, the Halliburton Labs Advisory Board, and the Founder Advisory for The Engine, a venture capital fund built by MIT.  Jennifer has an honorary doctorate from Delft University of Technology.

Fan Dai is Executive Director, California-China Climate Institute at University of California, Berkeley. Dr. Dai has played a significant role leading California’s collaboration with China on climate, energy and environment. She was appointed by Governor Edmund G. Brown Jr as Special Advisor on China. Under Brown, Dr. Dai chaired the state’s China Interagency Working Group, and acted as the state’s liaison on its critical economic and environmental initiatives on China. Previously, Dr. Dai served as senior advisor at California Environmental Protection Agency and California Governor’s Office of Business and Economic Development, advising on the state’s international policy and global climate partnership. In 2017, she organized Governor Brown’s trip, which resulted in a successful meeting with President Xi Jinping and the commitment to establish the California-China Climate Institute.

Dr. Dai is a graduate of Berkeley Law, University of California, and holds a doctoral degree on Environmental Policy and Economics from State University of New York. Her research has been focused on market mechanisms for climate change mitigation, energy efficiency and innovations.

Li’s scientific research focuses on exploring the molecular and cellular basis of higher brain functions and neurological diseases, and therapeutic development of cancer treatment.  His laboratory pioneered methods of generating transgenic animal models for these studies.

Li is also devoted to education development and reform, ranging from high school, undergraduate, graduate and medical student education and has won numerous awards for his teaching.

Li studied literature and philosophy before he turned his focus on bio-medicine.  He remains an active writer.  His translation of Richard P. Feynman’s What Do You Care What Other People Think? published by the Chinese Social Science Publisher in 1999, won a Chinese National Book Award in 2000.

Ouyang Bin is Associate Director of the Center on U.S.-China Relations at Asia Society, where his major interests concentrate on China’s political transformation, state-society relations, and the geopolitics of Northeast Asia.

Prior to joining Asia Society, Ouyang worked as a journalist in China. He served as a Senior Reporter at Phoenix Weekly, Senior Editor at Newsweek Select (Newsweek’s Chinese edition), International Editor at Caijing magazine, and Senior Editor with Caixin Media. He has received awards for his reporting from Phoenix Weekly, the Asian Development Bank, and the Reuters Foundation.

Ouyang earned his B.A. in Journalism from China Youth University for Political Sciences in Beijing, and his M.A. in Regional Studies-East Asia from Harvard University. He was a Harvard-Yenching Fellow from 2010-2012.

As the director of Long Now, Alexander founded The Interval and has facilitated a range of projects including The Organizational Continuity Project, The Rosetta Project, Long Bets, Seminars About Long Term Thinking, Long Server and others. Alexander shares several design patents on the 10,000 Year Clock with Danny Hillis, the first prototype of which is in the Science Museum of London, and the monument scale version is now under construction in West Texas.

Alexander writes about building artifacts and institutions that last, co-curates the Long Now Seminars, as well as The Conversations at The Interval and some talks at The Battery SF. Alexander is also an advisor to the METI project.

Alexander graduated with a bachelor of arts honors degree from Carnegie Mellon University in Industrial Design in 01995, as well as attended the Art Center College of Design. He was an artist in residence at Silicon Graphics Inc., and a founding partner of the robotics company Inertia Labs.

Alexander's combat robots have won over six world championship titles appearing in the hit TV show BattleBots. He has built large pyrotechnic displays for the Burning Man festival, robotic bartenders and other dangerous machines. Alexander was a world champion paintball player holding multiple world titles with his team the Ironmen from 1990 through 1995. At Carnegie Mellon University Alexander was the lead designer for a record setting human powered vehicle team.