The Avoidable U.S.-China War – A Conversation with Condoleezza Rice and Kevin Rudd

Program 4 of 8 in our Seeking Truth Through Facts U.S.-China Program Series 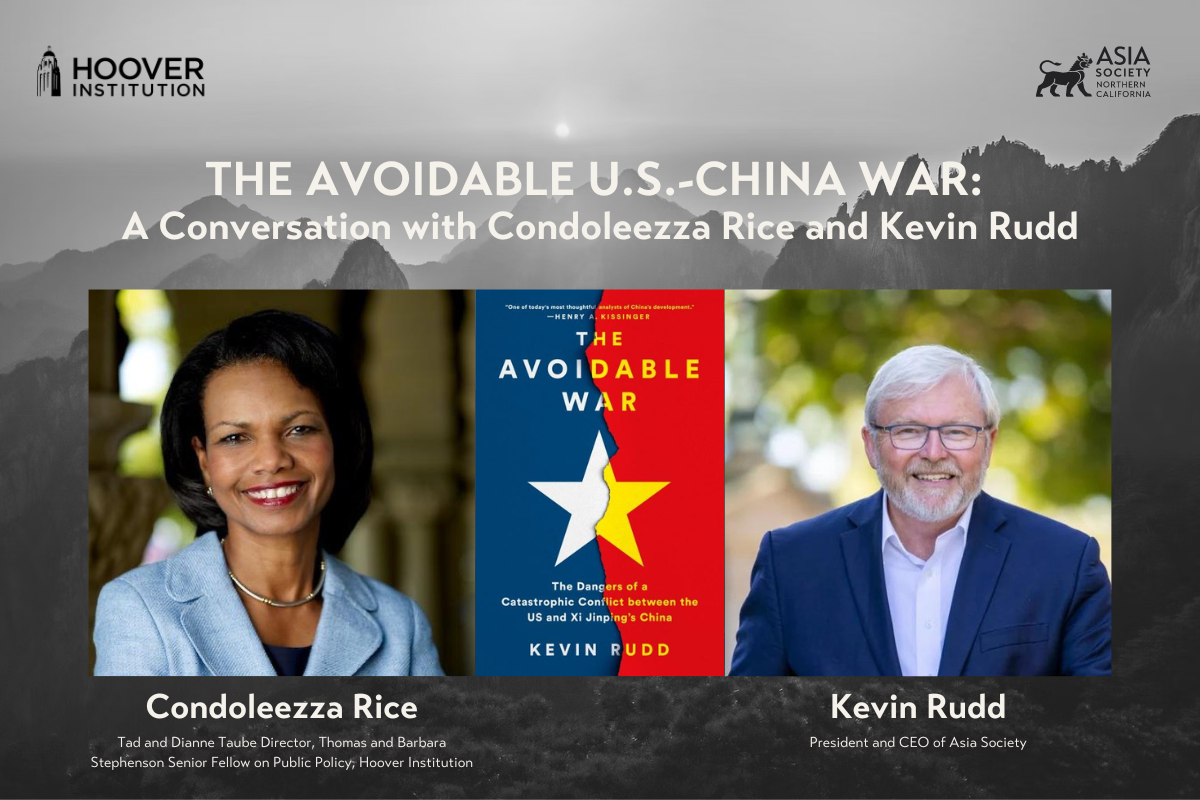 A war between China and the U.S. would be catastrophic, deadly, and destructive. Unfortunately, it is no longer unthinkable.

Join the Hoover Institution and Asia Society Northern California for a special conversation with former Secretary of State Dr. Condoleezza Rice and former Prime Minister of Australia Kevin Rudd on Thursday, October 6 from 4:30 p.m.-5:30 p.m. Pacific. At his only Northern California-based event, Rudd will talk with Dr. Rice who heads Hoover Institution about his new book The Avoidable War: The Dangers of a Catastrophic Conflict between the U.S. and Xi Jinping’s China.

This in-person program is complimentary and will take place at the Everett And Jane Hauck Auditorium at the Hoover Institution, Stanford University (435 Lasuen Mall, Stanford, CA 94305).

The relationship between the U.S. and China, the world’s two superpowers, is peculiarly volatile. It rests on a seismic fault—of cultural misunderstanding, historical grievance, and ideological incompatibility. No other nations are so quick to offend and be offended. Their militaries play a dangerous game of chicken, corporations steal intellectual property, intelligence satellites peer, and AI technicians plot. The capacity for either country to cross a fatal line grows daily.

The Avoidable War demystifies the actions of both sides, explaining and translating them for the benefit of the other. Geopolitical disaster is still avoidable, but only if these two giants can find a way to coexist without betraying their core interests through what Rudd calls “managed strategic competition.” Should they fail, down that path lies the possibility of a war that could rewrite the future of both countries, and the world.

This event is the fourth of eight in our popular Seeking Truth Through Facts U.S.-China Program Series, which focuses on new strategic frameworks for the bilateral relationship, plurilateral relationships, rebalancing trade, national security, technology, and climate change; as well as the global impact of the political and economic landscape. This program will lead up to our annual Future of U.S. & China Conference held in January 2023. 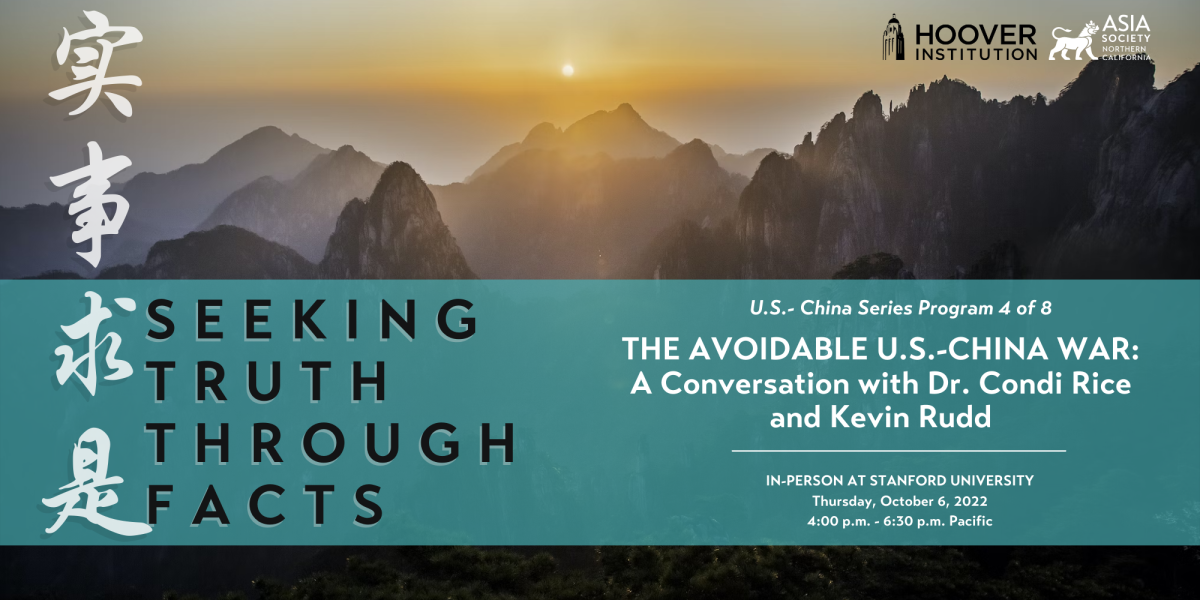 As Prime Minister, Rudd led Australia's response during the Global Financial Crisis. Australia's fiscal response to the crisis was reviewed by the IMF as the most effective stimulus strategy of all member states. Australia was the only major advanced economy not to go into recession. Rudd is also internationally recognized as one of the founders of the G20, which drove the global response to the crisis and in 2009 helped prevent the crisis from spiraling into a second global depression.

As Prime Minister and Foreign Minister, Rudd was active in global and regional foreign policy leadership. He was a driving force in expanding the East Asia Summit (EAS) to include both the U.S. and Russia in 2010. He also initiated the concept of transforming the EAS into a wider Asia-Pacific community to help manage deep-rooted tensions in Asia by building over time the institutions and culture of common security in Asia. On climate change, Rudd ratified the Kyoto Protocol in 2007 and legislated in 2008 for a mandatory 20 percent renewable energy target for Australia. Rudd launched Australia's challenge in the International Court of Justice with the objective of stopping Japanese whaling in the Southern Ocean. Rudd drove Australia's successful bid for its current non-permanent seat on the United Nations Security Council and oversaw the near-doubling of Australia's foreign aid budget.

Rudd is Chair of the Board of the International Peace Institute. He is a member of the IMF Managing Director’s External Advisory Group and the Global Leadership Council for Sanitation and Water for All. He is a Senior Fellow at Harvard University’s John F. Kennedy School of Government, a Distinguished Fellow at Chatham House in London, a Distinguished Statesman with the Center for Strategic and International Studies in Washington DC, and a Distinguished Fellow at the Paulson Institute in Chicago. Rudd is a member of the Comprehensive Nuclear Test-Ban Treaty Organization’s Group of Eminent Persons. He serves on the International Advisory Board of the Schwarzman Scholars program at Tsinghua University. Rudd is proficient in Mandarin Chinese. He remains actively engaged in indigenous reconciliation.

Condoleezza Rice (Moderator) is the Tad and Dianne Taube Director of the Hoover Institution and the Thomas and Barbara Stephenson Senior Fellow on Public Policy.  In addition, she is a founding partner of Rice, Hadley, Gates & Manuel LLC, an international strategic consulting firm.

Rice served as Stanford University’s provost from 1993 to 1999, during which time she was the institution’s chief budget and academic officer. As provost, she was responsible for a $1.5 billion annual budget and an academic program involving 1,400 faculty members and 14,000 students. In 1997, she also served on the Federal Advisory Committee on Gender-Integrated Training in the Military.

From February 1989 through March 1991, Rice served on President George H.W. Bush’s National Security Council staff.  She served as Director, then Senior Director, of Soviet and East European Affairs, as well as Special Assistant to the President for National Security Affairs. In 1986, while an International Affairs Fellow of the Council on Foreign Relations, Rice also served as Special Assistant to the Director of the Joint Chiefs of Staff.

As Professor of Political Science, Rice has been on the Stanford faculty since 1981 and has won two of the university’s highest teaching honors – the 1984 Walter J. Gores Award for Excellence in Teaching and the 1993 School of Humanities and Sciences Dean’s Award for Distinguished Teaching. Learn more here.