Program 8 of 8 in our Seeking Truth Through Facts U.S.-China Program Series 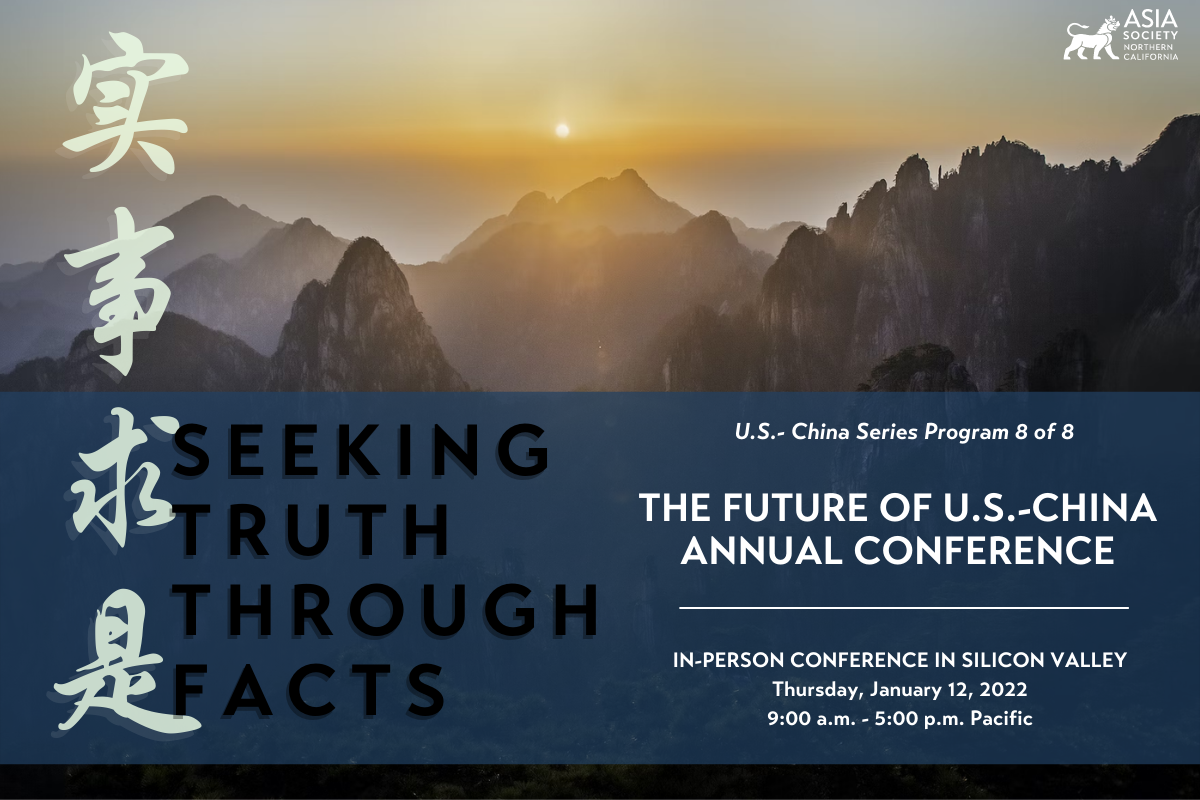 This will be a hybrid program, with both in-person and virtual attendees, and will take place at the Computer History Museum in Mountain View, CA.

Sponsorship opportunities are available for this conference.  If you or your company would like to support us by making a contribution, please email Angela Chung, Director of Finance, at achung@asiasociety.org.

This conference is the final event in our popular Seeking Truth Through Facts U.S.-China Program Series. This year's series will cover topics including U.S.-China Business Relations, Semiconductor Value Chain, Supply Chains in Asia, Political Relations between the U.S.-China, Research Collaboration, and the Belt and Road Initiative.

Ticket sales will close at noon on January 11. Walk-in tickets ($300 per person) will be subject to availability.

Asia Society Northern California Advisory Council Member Mark Cohen joined Berkeley Law in 2017 as a Senior Fellow and Director of BCLT’s Asia IP Project. With over 30 years’ experience as a law firm attorney, in-house counsel, government official, and adjunct and visiting professor of law, Cohen was previously Senior Counsel and Senior Advisor to the Undersecretary of Commerce/Director of the USPTO.

He is widely recognized as the leading expert in the U.S. on intellectual property law in China.  As Director of the BCLT Asia IP Project, Cohen is working with BCLT sponsors and faculty directors to develop collaborative relationships with academic institutions and other partners in Asia, including organizing workshops, conferences, and other events that bring data-driven insight to the complex IP landscape in China and other Asian fora.  Mark hosts the popular blog www.chinaipr.com, serves as an advisor to the IP database iphouse.cn, and has published books and articles on China’s IP system, antitrust law in China, civil and administrative enforcement of IP, and foreign law firms practicing law in China.

Elizabeth Economy is a senior fellow at the Hoover Institution at Stanford University and a senior fellow for China studies at the Council on Foreign Relations, where she previously served as the C.V. Starr senior fellow and director for Asia Studies for over a decade. Economy is currently on leave serving as a senior foreign advisor in the Department of Commerce for the current administration.
Economy is an acclaimed author and expert on Chinese domestic and foreign policy. Her most recent book, The Third Revolution: Xi Jinping and the New Chinese State, (Oxford University Press, 2018; Thai edition, 2018; Chinese (Taiwan) edition, 2019) was shortlisted for the Lionel Gelber Prize, a prestigious literary award for foreign affairs books. She is also author of By All Means Necessary: How China's Resource Quest is Changing the World (Oxford University Press, 2014; Vietnamese, 2019) with Michael Levi, and The River Runs Black: The Environmental Challenge to China's Future (Cornell University Press, 2004; 2nd edition, 2010; Japanese edition, 2005; Chinese edition, 2011). The River Runs Black was named one of the top 50 sustainability books in 2008 by the University of Cambridge, won the 2005 International Convention on Asia Scholars Award for the best social sciences book published on Asia, and was listed as one of the top ten books of 2004 by the Globalist as well as one of the best business books of 2010 by Booz Allen Hamilton's strategy+business magazine. She also coedited China Joins the World: Progress and Prospects (Council on Foreign Relations Press, with Michel Oksenberg, 1999) and The Internationalization of Environmental Protection (Cambridge University Press, with Miranda Schreurs, 1997). She has published articles in foreign policy and scholarly journals including Foreign Affairs, Harvard Business Review, and Foreign Policy, and op-eds in the New York Times, the Washington Post, and the Wall Street Journal, among others. Economy is a frequent guest on nationally broadcast television and radio programs, has testified before Congress on numerous occasions, and regularly consults for U.S. government agencies and companies. She writes about topics involving China on CFR's Asia Program blog, Asia Unbound, which is syndicated by Forbes.com. In June 2018, Economy was named one of the "10 Names That Matter on China Policy" by Politico Magazine.

Gary Rieschel is Chair of the Asia Society Northern California Advisory Board and has over 25 years of successful operating and investing experience as a senior executive, entrepreneur, investor, and global business strategist. He is Founding Managing Partner of Qiming, a firm with over $3 billion focused on early stage investments in China and one of China’s premier venture capital firms. Gary’s personal investment areas are Healthcare and Cleantech. He advised the China Greentech Initiative, and the Rocky Mountain Institute in its move to China. He actively supports the US China Clean Energy Forum, PERC (Property and Environmental Research), The Nature Conservancy, the Climate Leadership Council, the Council on Foreign Relations, and the U.S. Olympic Foundation. He served on the joint venture boards of Blackrock and Bank of China and Silicon Valley Bank and Shanghai Pudong Development Bank. Gary holds a BA in Biology from Reed College in Portland, OR, and an MBA from the Harvard Business School. He lived in Japan for five years in the late 1980s and lived in Shanghai from 2005 through 2016. He now lives in Seattle, WA.

Orville Schell is the Arthur Ross Director of the Center on U.S.-China Relations at Asia Society in New York. He is a former professor and Dean at the University of California, Berkeley Graduate School of Journalism.  Schell is the author of 15 books, 10 of them about China, and a contributor to numerous edited volumes. His most recent books are: Wealth and Power, China’s Long March to the 21st Century; Virtual Tibet; The China Reader: The Reform Years; and Mandate of Heaven: The Legacy of Tiananmen Square and the Next Generation of China’s Leaders. He has written widely for many magazine and newspapers, including The Atlantic, The New Yorker, Time, The New Republic, Harpers, The Nation, The New York Review of Books, Wired, Foreign Affairs, The China Quarterly, The New York Times, The Washington Post, and The Los Angeles Times.Schell was born in New York City, graduated Magna Cum Laude from Harvard University in Far Eastern History, was an exchange student at National Taiwan University in the 1960s, and earned a Ph.D. (Abd) at University of California, Berkeley in Chinese History. He worked for the Ford Foundation in Indonesia, covered the war in Indochina as a journalist, and has traveled widely in China since the mid-70s.  He is a Fellow at the Weatherhead East Asian Institute at Columbia University, a Senior Fellow at the Annenberg School of Communications at USC and a member of the Council on Foreign Relations. Schell is also the recipient of many prizes and fellowships, including a Guggenheim Fellowship, the Overseas Press Club Award, and the Harvard-Stanford Shorenstein Prize in Asian Journalism.

Margaret Conley, a Bay Area native, is the Executive Director of Asia Society Northern California. She is Chair of the global Asia Society task force "Asian Americans Building America". Margaret was based in Asia for several years as a television news correspondent with ABC News in Jakarta and Tokyo, and with Bloomberg Television in Shanghai. She was part of the global ABC team that won a News and Documentary Emmy Award for presidential inauguration coverage. Her interviews include Howard Schultz, Richard Branson, Ban Ki-Moon, LeBron James and Beyoncé. She has a bachelor’s degree from Columbia University and a master’s in journalism from the University of Hong Kong, which specializes in coverage of Asia. Margaret was selected as one of the Most Influential Women in Bay Area Business by the San Francisco Business Times in 2019. She is a member of the International Women's Forum.