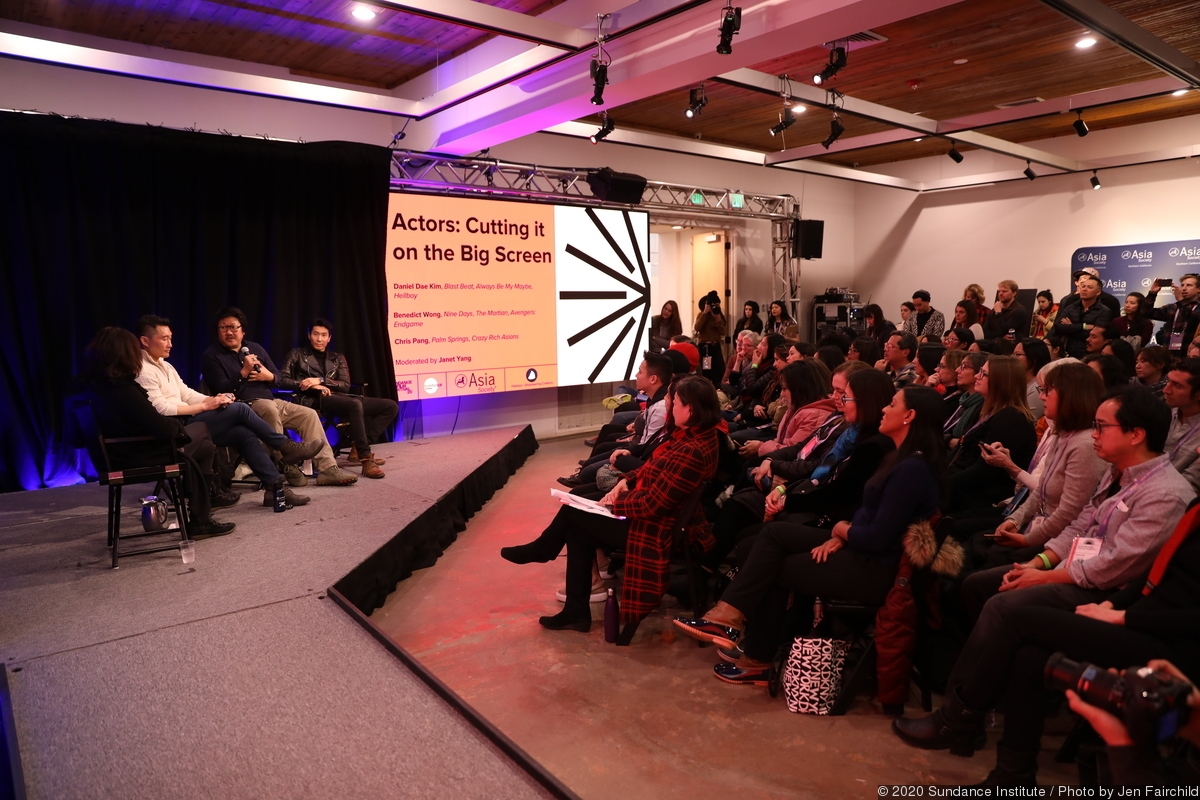 For the fourth consecutive year, Asia Society will host conversations honoring Asian filmmakers and talent at the 2022 Sundance Film Festival. Academy Governor and Chair of its Membership Committee and Asia Society Advisory Board Member Janet Yang (The Joy Luck Club, The People vs. Larry Flynt, Over the Moon) will moderate these discussions.

Given the rates of COVID-19 cases, Sundance Institute has decided to pivot the 2022 Sundance Film Festival to online only.

Asia Society will host live, virtual panel discussions on Tuesday, January 25 from 3:30 pm - 5:00 pm Pacific. This program is complimentary and open to the global community. Suggested donation is USD 25.00. Some aspects of our virtual offerings for Sundance Film Festival will also be pre-recorded.

Our event is listed on the official 2022 Sundance Film Festival website here.

Confirmed speakers, both live and pre-recorded, include:

Schedule of events may change due to the pivot to virtual.  Visit this webpage for the most up-to-date information.

Janet Yang (Moderator) is an Emmy Award and Golden Globe-winning Hollywood producer. Yang is a member of the Board of Governors of the Motion Picture Academy, as well as a Board Officer Chairing its Membership Committee. She came to prominence through her collaboration with Steven Spielberg on Empire of the Sun (Warner Bros).  That was followed by a long partnership with multiple Academy Award-winner Oliver Stone—where she served as Executive Producer on the iconic The Joy Luck Club (Disney), and as a Producer on the Golden Globe-winning The People vs. Larry Flynt (Columbia Pictures). Her most recent credit is as an Executive Producer on the Oscar-nominated animated feature, Over the Moon, released on Netflix in 2020.

Eugene Yi is a filmmaker, editor, and writer from Los Angeles, California. His editing work has been in Berlinale, Tribeca, and The New York Times. He formerly served as contributing editor for KoreAm Journal, a national Korean American magazine. Free Chol Soo Lee is his first film as director.

Kogonada recently completed directing several episodes of PACHINKO for Apple and Media Res, based on the best-selling novel. His award-winning debut feature film, COLUMBUS, starring John Cho and Haley Lu Richardson premiered at the Sundance Film Festival and was released in 2017. He also directed AFTER YANG for A24, starring Colin Farrell and Jodie Turner-Smith, which premiered in Cannes 2021 and will have a theatrical release early 2022.

Justin H. Min arrived to international recognition playing Ben Hargreeves on the hit Netflix series THE UMBRELLA ACADEMY. Season three will premiere later this year, featuring Justin in a pivotal new role, with Ben as a leader of the Sparrow Academy. Min will next be seen as the title character in A24’s drama AFTER YANG directed by the acclaimed filmmaker Kogonada. The film premiered at Cannes 2021 to rave reviews, with Justin’s performance highlighted as a standout. Min is second-generation Korean American from Cerritos, CA; he speaks fluent Korean and is passionate about minority representation in Hollywood. Proud of his Korean American heritage, he uses his middle initial to represent his Korean name, Hong-Kee. Min studied Government and English at Cornell University, and worked in international development and journalism before deciding to become an actor. He lives in Los Angeles.

Malea Emma Tjandrawidjaja is a 10 year old Chinese Indonesian American actor and singer. She is one of the lead actors in an A24 Film’s feature film, After Yang, where she acts opposite Colin Farrell, Jodie Turner Smith, Haley Lu Richardson and Justin H. Min. She started her acting career very young in TV commercials and was cast as Molly in Annie at the Hollywood Bowl. She has starred in Disney Channel’s Raven’s Home and Coop and Cami Ask the World. She also has a recurring role in the iCarly revival that is currently airing on Paramount Plus.

Martika Ramirez Escobar was born in Manila in 1992. Her love for the bizarre is best reflected through her films and photography. After graduating with honors from the University of the Philippines, her thesis “Stone Heart” competed at the 19th Busan International Film Festival, screened around the world, and won Best Film at Cinemalaya. Her latest work,“Quadrilaterals,” premiered at the 9th DMZ Docs. She is an alumna of the Berlinale Talents Tokyo, Asian Film Academy, Southeast Asian Film Lab, Luang Prabang Talent Lab, Fantastic Film School, Mowelfund Film Institute and is a recipient of the Purin Film Fund. She is currently working as a freelance director/cinematographer for various production houses in Manila.

Ham Tran received his MFA in Directing from the UCLA School of Film and Television, where his short films won numerous accolades including the title of National Finalist for the Student Academy Awards® for his short films THE PRESCRIPTION (2000) and POMEGRANATE (2001). Tran's thesis film THE ANNIVERSARY was top ten for the 2004 Academy Awards® for Best Live Action Short. In the spring of 2006 Tran premiered his first feature film, JOURNEY FROM THE FALL, at the prestigious Sundance Film Festival. This film went on to receive 16 international film festival awards for Best Feature Film.

In 2012, Tran began to direct films in Vietnam. “Am Muu Giay Got Nhon” (HOW TO FIGHT IN SIX INCH HEELS), received the Silver Kite award for Best Director in 2014 at the Golden Kite Awards in Hanoi, Vietnam. The success of “Six Inch Heels” was quickly followed by Tran’s 2014 horror film, “Đoạt Hồn” (HOLLOW). This film did so well in the box office that it paved the way for the horror film genre in Vietnam. Tran continues to pioneer new paths in 2015 with the release of “Sieu Trom” (BITCOIN HEIST), Vietnam’s first heist film. This film was very well received by audiences and film critics, and has found an occult audience in Vietnam. In 2016, Tran remade Thailand’s box office hit, “ATM Error” for local Vietnamese audience, retitled “Ban Gai Toi La Sep” (SHE'S THE BOSS). His latest feature film MAIKA (inspired by a popular 1970s Czech children's show) is an official selection at Sundance 2022.

Jenni Trang Le is a co-founder of EAST Films, whose mission is to empower visionary storytellers to excel in the global entertainment market. Her two latest feature film projects have been officially selected for Sundance (MAIKA) and Berlinale (MY FATHER’S TRUCK) in 2022. Jenni is a Vietnamese American film producer specializing in Vietnamese film production for the Vietnamese audience.

In her early years at UCLA, she joined the Vietnamese theatre troupe Club O’ Noodles, where she discovered what it meant to explore the complexities of a multicultural upbringing, but in the context of satire and humor. After working in Vietnam for the first time on THE REBEL (Dòng Máu Anh Hùng), she started to fall in love with the motherland, Vietnam, and decided to move to Saigon for one year.

Thirteen years and two cats later, she has produced fourteen feature films, two documentaries, and four music videos. Two of those films (LITTLE TEO in 2003 and FOOL FOR LOVE 2 in 2014) broke the Vietnamese box office record for that year. She would like to thank Vietnam for making her more “Googleable”.

Bao Nguyen is an Emmy-nominated Vietnamese American filmmaker based in Los Angeles and Saigon, Vietnam. He has directed, produced, and shot a number of short and feature films, which have played internationally in numerous festivals and museums including MoMA and the Smithsonian. His feature doc directorial debut, LIVE FROM NEW YORK!, celebrating 40 years of Saturday Night Live, opened the 2015 Tribeca Film Festival. He directed and produced BE WATER, a deep dive into the life and journey of Bruce Lee, competed in the U.S. Documentary Competition category at the 2020 Sundance Film Festival and was invited to other prestigious festivals such as SXSW, Cannes, Telluride, Hot Docs, among many others. It broadcast nationally on ESPN and is the highest rated premiere for an ESPN 30 for 30 film since 2018. In 2021, he was recognized for his work in the Asian community and selected as one of the year's most impactful Asians by Gold House on their A100 List. He is a 2011 PBS/WGBH Producers Workshop Fellow, an alumnus of the 2012 and 2014 Berlinale Talent Campus, and a Firelight Media Fellow. He earned his BA in Politics/International Relations at NYU and his MFA at the School of Visual Arts in New York City.

Anderson Le has diligently worked in independent and world cinema as Artistic Director of the Hawaii International Film Festival (HIFF) for the past two decades. He has also consulted for other festivals like Singapore, Udine, Toronto and Hanoi. Le previously worked as the international programmer for Comcast, working in providing monthly content for Xfinity on Demand with a focus on Asian and Asian American content. In 2019, he co-founded EAST, a transpacific production company producing global content. Their first productions included ROM (2019), which won the New Currents Prize at Busan, and BE WATER (2020), an official selection of both Sundance and Cannes Film Festivals. Their latest film, MAIKA (2022), is an official selection of Sundance.

Snow Hnin Ei Hlaing has worked as a freelance filmmaker in Myanmar since 2006, acting as director, producer, editor and sound recordist after attending film Schools in both Myanmar and Germany. Her short, BURMESE BUTTERFLY played festivals in over 20 countries, and PERIOD@PERIOD won for best short at the Wathan Film Festival. MIDWIVES is her feature documentary debut.