APEC 101 – What Can We Expect from APEC 2023 in San Francisco? | Asia Society Skip to main content 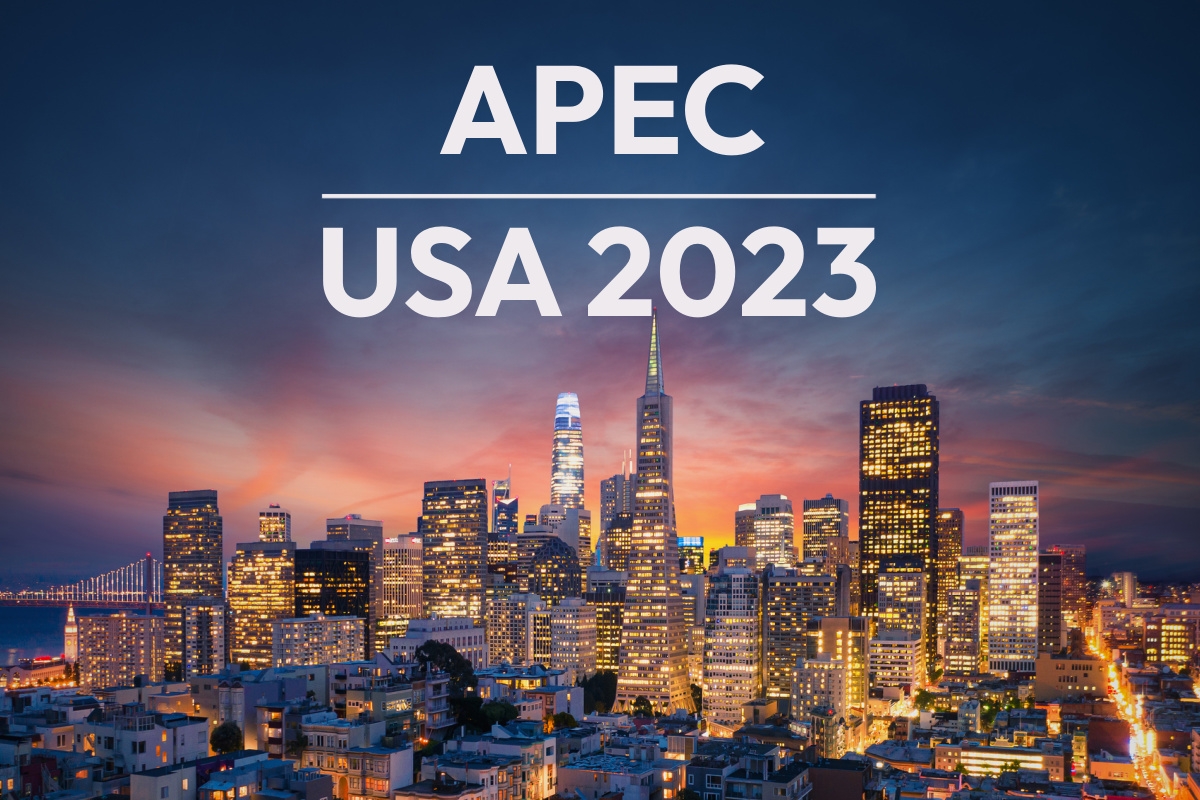 Save the date - registration will open Feb 1. Continue checking this event page for details.

Innovator, Groundbreaker, Advisory Council and Board Members will be invited to a private VIP Reception immediately preceding the public program from 4:45 p.m. - 5:20 p.m. Pacific. To become an Innovator or Groundbreaker Member, visit our Membership page or contact Mackenzie Jakoubek our Director of Partnerships and Memberships.

Join us in San Francisco on February 28, 2023 for a behind-the-scenes look at APEC, a forum set up to promote economic integration amongst its 21 members who account for 38% of the global population, and 62% of gross domestic product and 48% of trade.

Hear from the President of the National Center for APEC, Monica Hardy Whaley, and two former U.S. Ambassadors to APEC who – between the two of them – handled six APEC Leaders Meetings, including the last one hosted by the U.S. in 2011: Ambassador Kurt Tong, Managing Partner and member of the Executive Committee at The Asia Group, and former Consul General of the United States of America to Hong Kong and Macau, and Ambassador Larry Greenwood (Moderator), Board Chair of the Japan Society of Northern California, and senior adviser at BowerGroupAsia.

Asia Society and Japan Society Members receive a special discount for this program. Learn more and become a member today.

All guests are encouraged to bring a mask.

Larry Greenwood (Moderator) is senior adviser to the BowerGroupAsia, a government-relations consulting firm in Washington D.C. He lives and works in the San Francisco Bay Area. He is Board Chair of the Japan Society of Northern California. Greenwood worked four years in Tokyo, where he managed government relations throughout Asia for MetLife, and for five years in Manila, Philippines, where he co-led the Asian Development Bank and was responsible for about $7 billion of development lending a year. From 1976-2006 he served as a U.S. diplomat in overseas assignments at the embassies in Tokyo, the Philippines and Singapore and in a variety of other jobs at the State Department, including as ambassador to the Asia Pacific Economic Cooperation (APEC) group and principal deputy assistant secretary for economic and business affairs. Greenwood is a non-resident senior associate at the Center for Strategic and International Studies, one of the most prominent think tanks on international issues in Washington D.C. He serves on the boards of the Japan Society of Northern California and Capital Sisters, a non-profit that funds micro-loans for poor women in emerging economies. He holds a BA from Eckerd College in St. Petersburg, FL, and an MALD from the Fletcher School of Law and Diplomacy in Medford, MA. He speaks and reads English, Japanese and French.

Kurt Tong is Managing Partner at The Asia Group, where he leads the firm’s work in Japan and the broader East Asia region. Before joining The Asia Group, Ambassador Tong was an American diplomat for 30 years. From 2016 to 2019, he served as Consul General and Chief of Mission in Hong Kong and Macau. He was the Principal Deputy Assistant Secretary for Economic and Business Affairs at the State Department from 2014 to 2016, guiding the Department’s efforts as its most senior career diplomat handling economic affairs. He also served as the Deputy Chief of Mission and Chargé d’Affaires at the U.S. Embassy in Tokyo from 2011 to 2014, setting the stage for Japan’s entry into the Trans-Pacific Partnership. Ambassador Tong was Ambassador for Asia-Pacific Economic Cooperation (APEC) from 2009 to 2011 and led the U.S. chairmanship of the organization during the 2011 U.S. host year.  He worked in the White House as Director for Asian Affairs during the George W. Bush Administration and handled negotiations with North Korea on nuclear issues and other matters there and at the Department of State. In addition to Hong Kong and Tokyo, his overseas postings include Beijing, Seoul, and Manila.

Monica Hardy Whaley was named the President of the National Center for APEC in January of 2009. She served as NCAPEC’s Deputy Director at its founding in 1994 and as the Executive Director since November of 2002. Monica is responsible for management of NCAPEC’s policy and administrative staff, membership, fundraising and fiscal management, and serves as the public spokesperson and representative of the National Center for APEC. Prior to assuming her responsibilities at the National Center for APEC, Monica was the Interim President and Program Director of the Washington Council on International Trade (WCIT), the premier trade policy organization in the most trade-dependent U.S. state. WCIT served as the coordinating organization for the U.S. hosting of the 1993 APEC meetings. Monica holds Bachelor’s degrees in Political Science and French from the University of Santa Clara, and studied in Paris at the Institut d’Etudes Politiques (Sciences Pô). She is an Alternate Member of the U.S. APEC Business Advisory Council (ABAC), Chair of the US-APEC Business Coalition, as well as being a member of the Pacific Council on International Policy. She serves on several Advisory Boards, including those for Seattle University Albers School of Business-Department of Economics, the Seattle World Affairs Council and the Trade Development Alliance of Greater Seattle. She is also very active in local organizations in support of children’s charities, school and community groups.