December 17, 2021 — As a part of our Ambassador Interview webzine, Asia Society Korea Center is pleased to catch up with the Former Ambassador of the European Union to the Republic of Korea, H.E. Michael Reiterer. After a little over a year of retirement from his public official position, he updates us on what new interests he has developed, as well as what he has missed since leaving Seoul. With extensive diplomatic and policy experience, he gives insight into the future of relations between the EU and ROK in the economy, security, and bilateral relations. As an insider of academia through his role as the editor of the Brussels School of Governance Centre for Security, Diplomacy, and Strategy’s Policy Brief Series, he shares academics’ current interests and discussions. 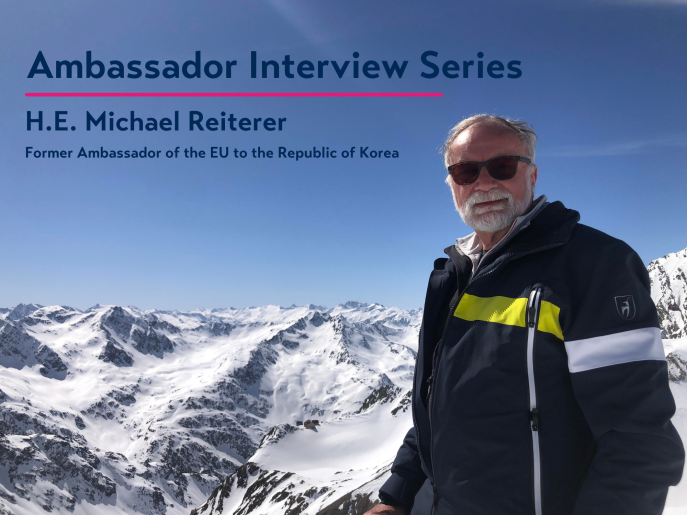 1. It has been a year since you retired from the European Diplomatic Service as Ambassador of the EU to the Republic of Korea. While many people take a break after retirement, you have kept busy. What have you been involved in since you left South Korea?

As retirement was not falling from the sky – I had even been extended to work up to 66 – I could draw on my long-term planning: I have always pursued academic and think-tank work as far as possible in parallel with my diplomatic career. In 2005 the University of Innsbruck made me an Adjunct Professor for international politics after successfully completing a “habilitation” process, the equivalent of a Ph.D. I connected as Distinguished Professor at the Centre for Security, Diplomacy, and Strategy (CSDS) of the Brussels School of Governance, where I helped install a Korea Chair before my assignment to Korea. I started the CSDS Policy Brief on foreign policy issues, focusing on Asia. I am happy to say that while we had planned for 12 annual editions, we are finishing 2021 with 26! I taught a course on non-state actors in foreign policy as well as courses on EU-Asia relations at Webster University, Vienna; Libera Università Internazionale Degli Studi Sociali "Guido Carli" (LUISS), Rome; University of Innsbruck; Danube University, Krems/Austria. A Fellowship at the Geneva Centre for Security Policy (GCSP), and advising positions for two think tanks, Center for Asia Pacific Strategy (CAPS), Washington D.C.; STEAR ( student think tank for Europe-Asia Relations), Singapore, round up a busy schedule. Co-editing and contributing to an edited volume with Palgrave on the cooperation of the EU and Korea on cybersecurity took up more time and energy than originally expected.

2. It has been just over a year since you retired from your Ambassadorship of the EU to the ROK. Having spent nearly four years in Seoul, what are the things you miss from your time in the country?

Not having been able to return because of COVID, thus not seeing friends, no common meals in nice Korean restaurants they made me discover is something I miss. In addition, it makes a difference whether you are part of the policy process. Meeting counterparts in person, as opposed to reading and thinking about politics. Hands-on for forty years of career and four years in Korea was nice!

3. In your time as Ambassador of the EU to the Republic of Korea, you were involved in many different programs and received an Honorary Citizenship of Seoul for your service to the city. What was your favorite project or activity you participated in while in South Korea?

A good form of ‘hands-on’ was public diplomacy which I liked a lot – meeting citizens, students at high school and university level and working also with those with handicaps. There I had a close cooperation with the Metropolitan Government. For example, the EU Goes to School project, where all my colleague ambassadors have participated and still do, COVID permitting. The Euro-Village at the opening of the Seoullo 7017 in 2017, the annual Car Free Day, Open House Day for Seoul citizens, discussion with city council members on greening the city were some other events which marked the cooperation with the City of Seoul.

Many lectures and discussions at all major universities as well as institutions like the Asia Society helped me to raise the profile of the EU while learning from the interactions.

Getting into Naver world, special to Korea in Korean, was also a challenge that we engaged in with young motivated bloggers.

Ever since the 2018 Paralympics drawing attention to persons who have to live with various handicaps has been part of the work by providing a platform, participating in the opening of exhibitions. Raising consciousness, fighting exclusion from society, allowing them to participate are the key ideas. Some universities like Wonkwang in Iksan run special programs to develop those working with persons with disabilities. HUMANAID is an active NGO publishing a magazine, newspaper and organizing exhibitions of artists with a handicap. A planned trip to Europe failed due to COVID and had to be changed to an exhibition with Project Ability. It opened on the first day of my retirement!

Supporting  Anna’s House’s Seongnam and Father Vincenzo, who provides daily meals for the homeless, was a pleasure alongside my artist friends, the painter  Kim Hyun-jung and the flutist Jasmine Choi, helped me, as well as the European Chamber of Commerce in Korea.

Another project was the virtual concert again with friends for Europe Day, 9 May 2020 – the European Union commemorates its founding when French foreign minister Schuman presented his plan to pacify Europe – the common control over coal and steel to render the secret production of weapons impossible. An in-person event was no longer possible, so we produced a short online video featuring the national anthems of the EU and Korea and works from Bach and Mozart as a contribution to peace. Please watch it here!

A year earlier, 2019, we celebrated this event in person at Korea University, for the first time a joint venture of the four Jean Monnet Chairs in Korea at the SKY universities and HUFS University. In the spirit of Jean Monnet, four competitive universities worked together! A seminar and a reception with students, professors with the diplomatic corps was a nice people-to-people event.

Representing the European Union is always a challenge, as it is abstract, an idea, institutions, and buildings in Brussels. My colleagues could refer to Rome, to the Eiffel Tower, to Italian food or Roja wine … This is all part of European culture and tradition, thus also good for the EU Ambassador, but explaining the idea of a peace project, the merits of cooperation and integration, of fighting for human rights worldwide – that is more difficult. I tried to turn the 10th anniversary of the Strategic Partnership with Korea into an event in launching a public competition for a logo, in cooperation with the public diplomacy section of the Ministry of Foreign Affairs.

I also made an effort to present the EU not only as an economic actor. As important as it is as the largest investor in Korea and is the fourth largest trading partner based on a free trade agreement, it is also an important political player and security provider supporting a diplomatic solution on the Peninsula. Biding farewell to the Korean destroyer Choi Young in Busan to join the EU anti-piracy operation ATALANTA off the coast of Somalia was a means to make this ongoing security cooperation visible. It should be enlarged as part of the Indo-Pacific Strategy – Korea has become an important middle power and has to shoulder global responsibilities e.g. beyond the Korean Peninsula.

The last-minute introduction of a Korean Green Deal inspired by the EU remains a lasting reward. The EU project, Enhancing Security Cooperation in and with Asia, is implemented in Korea in the area of cybersecurity – as one of the most connected societies and technological leader, an excellent partner.

Talking politics and a larger role of the EU: I recently had the pleasure to reconnect with my friend and former colleague US Ambassador Harry Harris for an ambassadors’ talk on the Indo-Pacific by RUSI!

4. As editor of the CSDS Policy Brief Series, what are popular topics of interest that people like to read about?

The CSDS has an Asia focus. Hosting the Korea Chair and a Japan readership, thus researchers provide briefs. In addition, we covered by way of example European border problems, the search for a European security culture (European Compass), the implications of emerging technologies on foreign policy, food security, new forms of minilateralism,  the Indo-Pacific strategy, Russia challenging Europe and of course Korea and North Korea. Concerning the latter, we published five background briefs that fed into the process of drafting.

5. Working at the Brussels School of Governance, you have kept an interest in Korea-related policy. In November, you participated in the Korea-Europe Policy Dialogue in partnership with the Sejong Institute. What were the significant issues you discussed relating to peace on the peninsula?

6. EU member countries and South Korea have strengthened their economic, security, and bilateral relations since the 2010 Strategic Partnership and 2011 Free Trade Agreement. As an advocate for developing these policies, in which other areas would you like to see further cooperation?

As mentioned, I am working on a book on cybersecurity cooperation between the EU and Korea. It is striking that e-commerce which got another boost through the pandemic is not covered by the FTA. Companies from the EU are the largest investor in Korea – investment is not covered. Greening the economy has repercussions on trade, services, and finance – concerning the latter awareness raising is still necessary. The EU has developed a common language and a clear definition of what is ‘sustainable’ -  “taxonomy” is the horrible technical term. “Green” is particularly important in finance as this is an effective instrument to channel investment to build a circular economy and meet the 2030 targets.  Most importantly “green” finance is a promising area for discussion and cooperation. Workshops, like with KIEP, an excellent think tank with great interest in the EU, were part of awareness-raising. The Global Green Growth Institute's (GGGI) in Seoul is an important partner in this respect.

H.E. Michael Reiterer is Former Ambassador of the European Union to the Republic of Korea, having previously held the position of Principal Advisor at the Asia and Pacific Department, European External Action Service (EEAS), Brussels, in charge of strategic and security matters. He previously served as EU Ambassador to Switzerland and the Principality of Liechtenstein (2007-2011), Minister/Deputy Head of the EU-Delegation to Japan (2002-2006), and ASEM Counselor (1998-2002).

Ambassador Reiterer studied law at the University of Innsbruck (Dr. Juris) and holds diplomas in international relations from the Johns Hopkins University/Bologna Center and the Graduate Institute of International Studies in Geneva. In 2005, he was appointed adjunct professor (Dozent) for international politics at the University of Innsbruck. Time permitting, he teaches at various universities and specializes in EU foreign policy, EU-Asia relations, and interregionalism, areas in which he has published extensively.

He is currently serving as Distinguished Professor for International Security and Diplomacy at the Institute of European Studies in Vrje Universiteit Brussel (VUB) and as Adjunct Professor of International Politics at the University of Innsbruck. He serves as Associate Fellow for the Global Fellowship Initiative at the Geneva Centre for Security Policy (GCSP) and Senior Advisor to the Center for Asia Pacific Strategy (CAPS), Washington D.C.