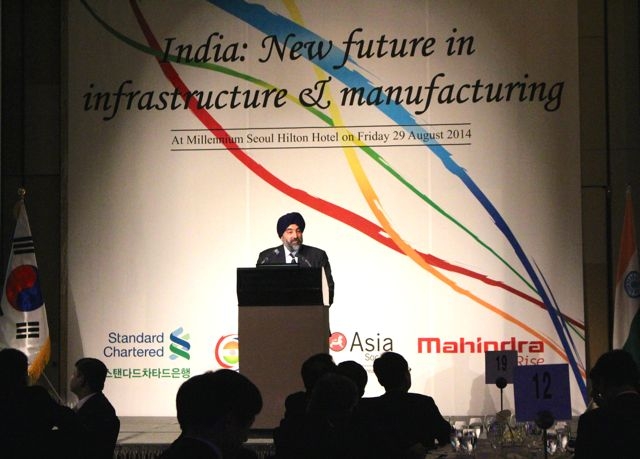 August 29, 2014 - The Asia Society Korea Center, in partnership with the Embassy of India in Seoul, along with Standard Chartered Bank, Indian Chambers of Commerce in Korea (ICCK) and Mahindra & Mahindra organized one of the biggest ever Indian business symposia to be held in Korea. The event entitled, “India: New future in Infrastructure & Manufacturing” was held at the Millennium Hilton Hotel in Seoul with over 180 Korean executives, journalists and consultants attending. Yvonne Kim, Executive Director at the Korea Center, was the emcee for the event.

The background of the event was to explain the changes in the recent policies of the newly elected Indian government in which they are looking to expand India’s manufacturing base and infrastructure, as well as create a more conducive business environment. Korea and India have strong business links with each other and there are currently over 600 South Korean companies present in India having invested over US$5 billion. Korean companies have been investing $25-30 billion abroad annually and are keen on scaling up their presence in India, given the huge market & business opportunities on offer.

Welcome remarks were made by Ambassador Vishnu Prakash before Secretary Anil Wadhwa, Vice Minister of External Affairs, delivered the keynote address. The Asia CEO of Standard Chartered Bank, Mr. Jaspal Bindra, gave a talk on “India economy, today and tomorrow” before the chairman of the Delhi-Mumbai Industrial Corridor Mr. Talleen Kumar, delivered his presentation. This was followed up by the president & CEO of Korea Delphi Auto Components, Mr. Y.J. Kim, who talked about “My India Experience”. Excellent presentations were made by representatives of the Government of Gujarat, KPMG India and by the economist, Mr. Samiran Chakraborty. The presentations were followed by an enthusiastic Q&A session and lunch, which gave the participants ample opportunity to network.