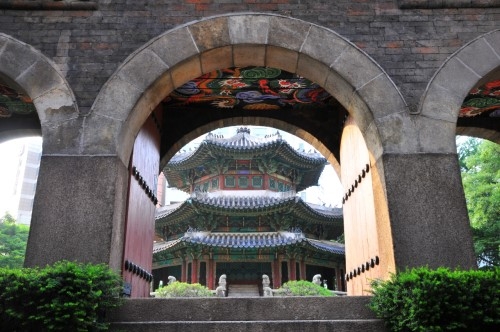 Given that Seoul is a megacity, it is understandable that some important sites slip by the attention of the city’s citizens and tourists. Hwangungu Shrine, located in Jung-gu, is one example, but its rich history means that it merits not getting lost among the many wonderful sightseeing options in South Korea’s capital.

Hwangungu Shrine and the three stone drums that sit next to it were built in 1897 to accompany Wongudan Alter, which is also known as Hwangudan. The alter was built two years earlier but the location had been used for hundreds of years as a place for emperors to perform animal sacrifices to higher powers. Referred to as the Rite of Heaven, the ceremony was performed during the pre-Three Kingdoms period. The location was strategically chosen since it sits between Namsan and Bukhansan in a place that was auspicious to geomancers.

King Seongjong is documented as being the first of the Goryeo kings to hold the ritual that was designed to ensure a bountiful harvest in 983AD. Despite the rite eventually being abolished, it was briefly reintroduced by King Sejo of the Joseon Dynasty. However, he also brought it to an end during the tenth year of his reign in 1464. Since it was believed that only emperors could beseech the Gods, the Korean rulers avoided the practice during much of the Joseon Dynasty because they used the title of “King” so as not to offend the Emperor of China. For this reason, the practice did not return until King Gojong’s Korean Empire reintroduced it in 1897.

The Japanese colonial period saw the practice come to an end in 1910, and the site would go on to become the location for the Railroad Chosun Hotel. Today the Westin Chosun Hotel sits in its place. During the construction of the Railroad Chosun Hotel, the Japanese made the decision to destroy Wongudan Alter; hence, today’s visitors to the site will only see the Hwangungu Shrine and the three stone drums. The three-story granite complex was designed to mimic objects of worship such as the sun and moon; furthermore, the three stone drums symbolize the instruments used for the rites.