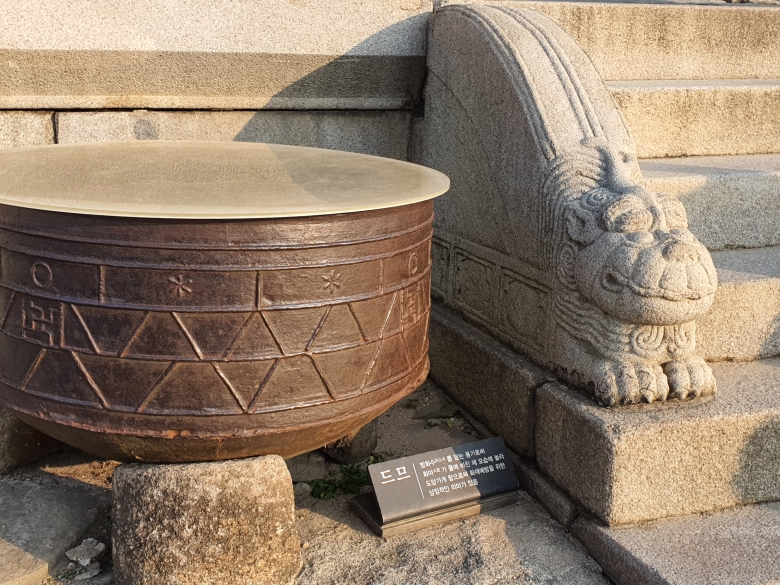 2020 has been a challenging year for people around the world for more reasons than just the pandemic. One story that took up the headlines for weeks was the devastating fires in California and Australia. Fire has been and still remains one of the most feared disasters in human history.

As such, preventing and fighting fires has been a critical part of people’s lives, and it was no different during the Joseon dynasty. To prevent deadly fires, water was kept in a large, broad-shaped pot called a deumeu (드므). In the winter, the water was regularly stirred to prevent it from freezing and some scholars even claim that a small fire was kept burning beneath the deumeu during cold weather.

On top of its primary purpose as a fire hydrant, the deumeu also acted as a charm to keep away fire spirits. Back in those days, people believed that both home fires and wildfires were caused by a demon-like figure, a spirit of fire that intended on harming people. Similar to the haetae (해태), a mythical, lion-like animal, that was placed in front of the palace to chase away fire spirits and other negativity, the deumeu was designed to specifically ward off the fire spirit. According to folktales, a fire spirit is extremely ugly and vulgar looking. However, being a spirit, it had never had the chance to see itself. When it finally saw its reflection in the river, it ran away, terrified. To make sure the spirit could clearly see its reflection before it reached any major buildings, each deumeu had a wide opening and always had water filled to the brim.

During the Joseon dynasty, most of the architectural elements were made of wood, with the exception of the foundational stones and roofing tiles called gi-wha (기와). Moreover, the palace was a series of corridors and colonnades that could let a fire spread rapidly. For this reason, the Joseon people kept deumeus in various places around the palace to promptly respond in case of a fire.

Although modern fire extinguishers have replaced deumeu, a few deumeus have been kept within Korea’s palaces as artifacts. They are no longer filled with water and are often covered with acrylic covers to prevent littering. During your next visit to a palace, take a little time to search for one. In the process of looking for deumeu, you may learn a few things about the daily lives of the people from the Joseon period.